Cement & lime manufacture are responsible for nearly 10% of man–made CO2 emissions. These two processes are unusual because the majority of their emissions come not from fuel combustion 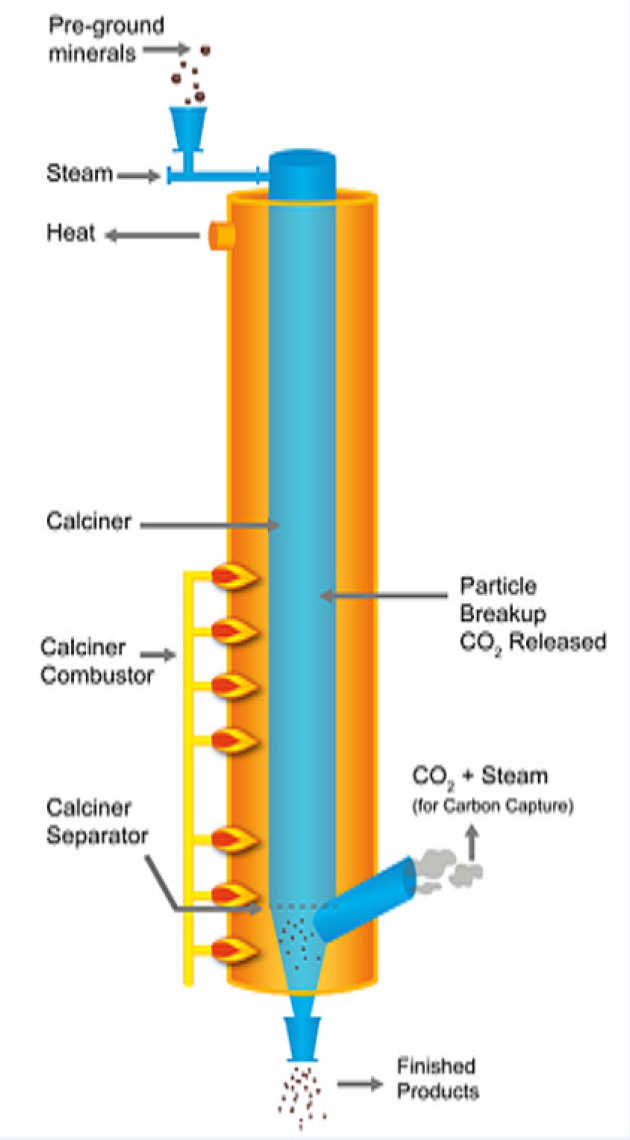 but from the calcination of limestone (CaCO3), producing lime (CaO) and CO2.

Calcination is achieved by raising the temperature of the limestone to around 900 °C in a vessel called a calciner. In a conventional system, limestone enters the calciner and is heated by burning fuel (in air) in the same vessel. The combustion gases and the CO2 from the limestone calcination mix and exit the calciner. Because the CO2 has been mixed with the nitrogen and oxygen in the air, it is difficult to separate the CO2 from the other gases.

In the €21M LEILAC project, a new method of calcining limestone is being developed. Instead of mixing the limestone with the fuel and air, it is segregated and the gas streams kept separate. This is known as direct separation. In the direct separation unit, an inner tube containing steam and limestone is heated by the combustion of fuel in the outer tube (annulus). The steam can be easily separated from the CO2 from calcination by condensing it out, unlike separating CO2 from nitrogen. Since almost two-thirds of direct CO2 emissions from modern cement plants come from the limestone, if this CO2 is not emitted but sent for permanent geological storage, the direct CO2 emission intensity of the process can be significantly reduced.

The EU and LEILAC consortium members are funding the development of a pilot plant in Belgium which will be connected to an existing cement plant. Imperial College London is supporting this project through the characterisation of raw materials and the resulting products, so that their suitability for use in the process, or for sale, is confirmed. We are contributing to the plant design by performing modelling of the heat transfer between the outer tube and the inner tube, something critical for designing the pilot plant. In addition, we are designing, building and operating a laboratory-scale reactor for measuring the kinetics of the calcination process at high steam and CO2 concentrations, which will also contribute to the reactor design.