Matt Douthwaite is a PhD student in Electrical Engineering with an interest in teaching and outreach. “I’m an engineer so I like making things,” he explains. “I also do quite a lot of work as a graduate teaching assistant and I’m a real advocate for getting children into science and engineering. A lot of children think they can’t do science and that’s a problem.”

When Douthwaite heard that a workshop on using ‘escape rooms’ for teaching was running at Imperial, he signed up straight away. “It looked more exciting than a typical graduate school workshop, so I applied and got a place.”

In general, an escape room is a type of game where players have to use information or materials they are given to solve a series of trials or puzzles. They can ‘escape’ from a room when they complete the game.

The workshop was run over two days in July by Giskin Day from Imperial’s School of Professional Development, with places for 30 students plus mentors. Douthwaite and the other students spent the first morning learning about escape rooms and trying a few games out for themselves.

“The work shop was pretty cool and included playing an escape room that Giskin had created, I really liked her game and it was the inspiration for what I went on to do.”

Then the students worked in teams of six to eight to come up with an idea of their own. “My idea was to teach STEM topics to 14-16-year olds, initially by getting them to break out of a room. My group was keen on the idea and our mentor, Beth Slater, is a secondary school teacher as well as an Imperial alumna. So, we created a game based on material from the BBC’s GCSE bite-sized website.”

Comments from the Festival

People said they Ioved “the whole concept, the variety of the challenges” and “cracking all the codes and eventually finding out the answer”. They said “being patient was difficult, but we worked better when giving each other space”. They also said “it was a fun way of learning” and “I will remember the experience”.

By the end of the two days, the group had developed an idea to break into a bag, meaning the game would be portable, but it was not yet finished. Students were expected to work on their games over the summer and return in October to give a demonstration. Douthwaite says the demonstration went well, so they planned to run the activity at the next Imperial Festival, where thousands of visitors of all ages come on to campus.

In the finished version of the game, which became known as ‘Breaking Bag’, children are given a backpack with several sealed pockets. Each one is filled with different information and materials that help players find a code that opens a padlock to the next pocket. With very little instruction, they must solve the puzzles to ultimately unlock the final compartment.

“There are three main puzzles – one on chemistry, one on biology and one on physics – plus some mini maths puzzles. Everything they need is in the bag. Children find is very engrossing and they can’t wait to find out what’s next.

“The biology puzzle is a genetics problem. There’s a diary belonging to a dog owner explaining that he wants to breed a certain type of puppy. They have to use a genetic table to realise which type of father dog he needs to produce that type of puppy. When they solve it, they find a three-digit ID number in a breeder’s catalogue.

“The chemistry one is about testing the pH of coffee, indigestion tablets and water, and in the physics puzzle they need to use water to refract a beam of light to get the answer.”

The whole game is designed to last 20 to 30 minutes, so it can fit into a standard 50-minute lesson, allowing time for discussion.

For the Festival, Douthwaite and his colleague Kam Pou Ha, a postgraduate in the Department of Medicine, created extra copies of the bag so four teams of up to six people could play simultaneously. They were so popular that visitors had to queue to take part. “There were all ages. I was really happy to see that the kids were better than the adults at solving the game. Just occasionally the adults got a bit too involved and got in the kids’ way. When that happens, quieter children can feel side-lined. 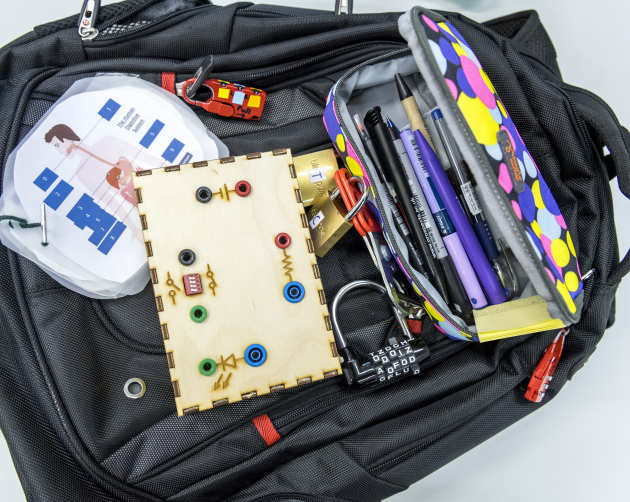 “There were quite a few people at the Festival who work in education and they gave me really great feedback. Our mentor Beth Slater, who is a teacher, tried it out with some of her pupils. She said it was popular with the children, although they needed more guidance, and her colleagues were keen to try it out with their own classes.”

Giskin Day thinks that ‘Breaking Bag’ has commercial potential, for example hiring out the bags to schools. She is keen to see it being used more widely, for example as part of Imperial College’s outreach programme. Douthwaite is considering the possibility of creating a start-up, but he still has a PhD to complete.

Ultimately, he thinks the secret of the escape rooms success in teaching and learning is that it is less abstract and more linked to the real world. “In the game, instead of being given a genetic table as you would in a traditional lesson, you have to read the diary and work out that a genetic table is what you need. I know from when I present my own research that people are more invested if it’s linked to real life.”