The Department of Aeronautics has excellent facilities for research and teaching.

Experimental research is supported by well-appointed laboratories and wind tunnels, and some of the equipment hosted here is unique to the UK.

Enquiries about the use of facilities may be directed either to the Department Operations Manager Siân Haynes, the Wind Tunnel Manager, Dr Nigel MacCarthy or by contacting the relevant facility manager, listed under each facility. 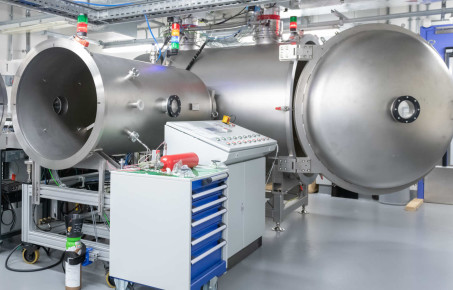 Read about the Space Engineering Lab and the Department's Space research. 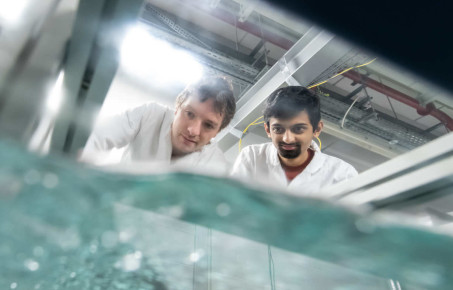 Read about how our Hydrodynamics Flume can be used to accommodate a broad range of research projects. 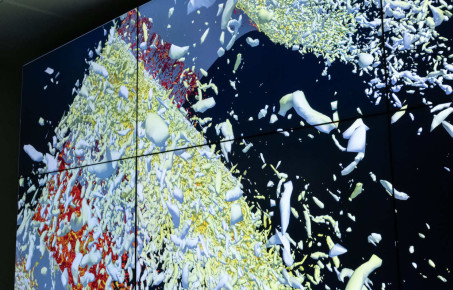 The visualisation wall allows our researchers to interactively inspect large computational and experimental datasets containing hundreds of millions of points. 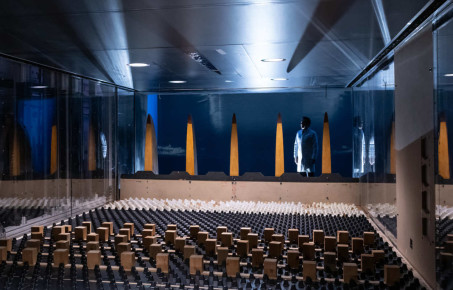 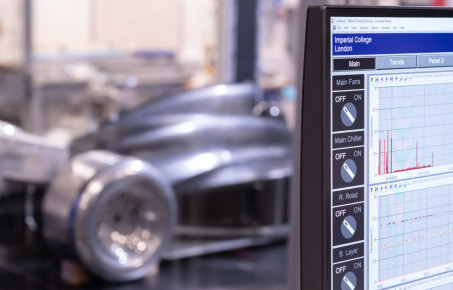 Find out more about our T1 and T2 Wind Tunnels, which provide sophisticated core facilities for researchers in experimental Aerodynamics and for teaching. 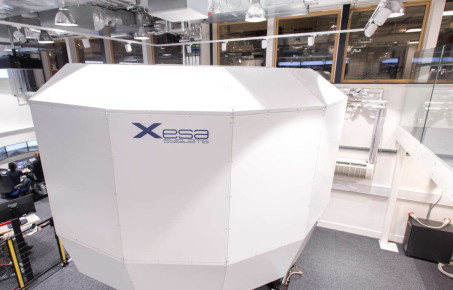 Read about the Department's full motion Flight Simualtor, that can be programmed to accurately simulate almost any type of aircraft.

Given the highly computational nature of the department, it is not surprising that computing facilities are outstanding. Research activities make use of two High Performance Beowulf clusters, an Itanium server and a large number of Linux and Unix workstations, as well as Windows PCs. In addition, research groups have access to College-wide and external parallel facilities.

There are two teaching laboratories open to all department members. The main teaching laboratory consists of 44 HP PCs running Linux and Windows. The second teaching cluster has 28 computers, 18 of which are dual-boot and 10 are Linux-only PCs used mainly for projects. Both computer rooms operate between the hours of 7.00 and 22.00, seven days a week.

The two clusters and all the research workstations are linked via 100Mbit links to the 1Gbit College network and the Internet.

Peripherals available for public use include several high-resolution laser printers, including a colour laser printer.

Undergraduates make extensive use of the computer laboratories for classes such as an in-depth programming course, numerical methods courses and Computer-Aided Design courses using a three-dimensional solid modeller package. In addition, it is used for projects which range from Finite Element analysis to Aircraft Design and Computational Fluid Dynamics.

The Department of Aeronautics has its own full-motion flight simulator. This is a highly re-configurable simulator that can be programmed to accurately simulate almost any type of aircraft. It is equipped with a two-seat cockpit with fully programmable glass display instrument panels, realistic dual side-by-side flight controls, systems switches, full radio navigation stack, replaceable multi-engine throttle quadrants and a full autopilot. A 140-degree wrap-around external visual system provides a realistic representation of the surrounding terrain, major topographical landmarks and accurate airport runway layouts for all the airports around the world.

The system is also provided with a full aeronautical navigation database and a day/night weather generation capability. The cockpit is mounted on to a six-degree of freedom all-electric full-motion platform which significantly enhances the flight simulation realism. An instructor operating station is also available, equipped with controls and displays for setting up different flight scenarios, changing the weather, inducing aircraft system malfunctions, and for flight monitoring in general. The flight simulation is controlled by six computers.

The Department has a comprehensive series of wind tunnels, covering speeds from a few metres per second to Mach 9. There are 5 general purpose low-speed tunnels with working sections from 0.4 to 16 square metres.

This tunnel has two large test sections and the lower section is fitted with a moving floor and is used extensively for F1 racing car and saloon car testing. It is also fitted with equipment to simulate the atmospheric Boundary Layer for wind engineering of buildings and other structures (1:200 scale and upwards).

This facility is part of the National Wind Tunnel Facility and is capable of road vehicle and racing car aerodynamic testing. The lower test section is 3m x 1.5m x 20m long and the upper section 5.7m x 2.8m x 18m long. Wind shear and turbulence of the atmospheric environment can be simulated in this for studies of pollution and the wind loading of buildings and structures. The tunnel has a sophisticated 3-axis probe traversing mechanism, non-intrusive particle image velocimetry (PIV) equipment and the control and data processing are fully computerised. For more information contact the wind tunnel manager below and visit the 10x5 wind tunnel section.

This tunnel is temperature regulated and fitted with a 3-axis precision traverse. The following are its main characteristics:

There are also six wind tunnels ranging in capability and test section size with speeds of up to Mach 9. These are:

The Department has a facility that uses water as the working medium and has been developed especially to study the wave forces on sea-based structures:

The Department is host to many facilities used in the manufacture, characterisation and mechanical testing of composites.

The Department has a long tradition of testing complex mechanical and structural components. Testing of materials, compression and tension, fatigue, environment, high energy and gravitational impacts, is available.

Most of the equipment is fitted with electronic instrumentation and/or is computer controlled.

Flight test lab with full fume extraction (air replaced 15 times/hour),DPSS laser allowing for the safe indoor testing of combustible fuels and rocket engines for micro aerial vehicles. The lab is equipped with a 8-camera Optitrack system for vehicle tracking, a water tank for aerial-aquatic tests, and a protected observation area.

A diode-pumped solid state laser capable of machining 3-dimensional structures into almost any material, with a beam diameter of 8µm at maximum focus.

A multi-material 3D printing system, with a 350x350x200mm build envelope and a 16µm layer height. The machine is capable of printing rigid mechanisms as well as in soft rubber-like materials.

A parylene deposition system capable of manufacturing microscale flexible skins, and conformal coatings for the protection of components hondaturbines from water damage and solvents.

An interdepartmental centre, with experience in design and fabrication of the whole spectrum of modern composite materials.

The Aeronautics department has a comprehensive series of wind tunnels, covering speeds from a few metres per second to Mach 9. There are 5 general purpose low speed tunnels with working sections from 0.4 to 4.5 square metres.

A huge range of testing platforms, ranging from heavy lift (>5kg) octocopters, to high precision conventional quadrotors and high performance micro (<100 gram) vehicles. These vehicles are used to test novel mechansims and flight algorithms, or are modified to operate reliably in realistic environments.

Vacuum forming and strip heating machines for the manufacture of plastic shell structures.

Makerbot 5 and Stratasys Dimension 3D printers for rapid manufacture of components in ABS and PLA plastics.