A tracer cloud behind the manikin, showing the wake and its intermittancy.

The Department of Aeronautics is conducting research into the inter-person transmission risk of Covid-19 during outdoor exercise.

The aim of the project is to obtain detailed data on wake concentrations generated by individuals exercising outdoors (whether walking, jogging, running or cycling). This data is to be obtained to provide Public Health England and Government Committees with a quantified tool to help assess the infection risks, as well as practical strategies to minimise infection rates.

I was delighted to be contacted by the Aeronautics team about this exciting project, proposing to evaluate particle movement during exercise and its impact on risk of infection during exercise. This work is vital and should inform guidance on exercise precautions, so that we ensure that people remain physically active and do so in the safest way possible."

The experiments are conducted using fixed equipment (such as treadmills and exercise bikes) in a correctly matched airstream, under conditions which accurately simulate the relative motion through the air of an exercising person. The tests are being conducted with Dr Kevin Gouder's team in the Department’s 10 x 5 wind tunnel, the upper section of which allows the use of human subjects without any flow constraint. The co-leads on the project are Dr George Papadakis (the project's PI) and Professor Denis Doorly.

Virus infections like COVID are known to be transmitted in an infected person’s exhaled breath particles.

During the wind tunnel experiments, the concentration of particles emitted from exhaled breath (which are then convected downstream) are measured at a range of wake cross-sections behind the person exercising. Small particles are found to remain airborne as an aerosol. This follows the flow and has the potential to be inhaled by a second person in the vicinity. Larger particles are more strongly influenced by gravity, and tend to settle on surfaces where they can leave a residue of the virus.

The initial experiments have used CO2 as a benign tracer in the human breath and as a surrogate for the virus-carrying aerosol. Novel sampling probes  ‘AirSniffers' are used to measure the CO2 concentration at selected positions behind the test subject.

Right: An example of a measured concentration time series 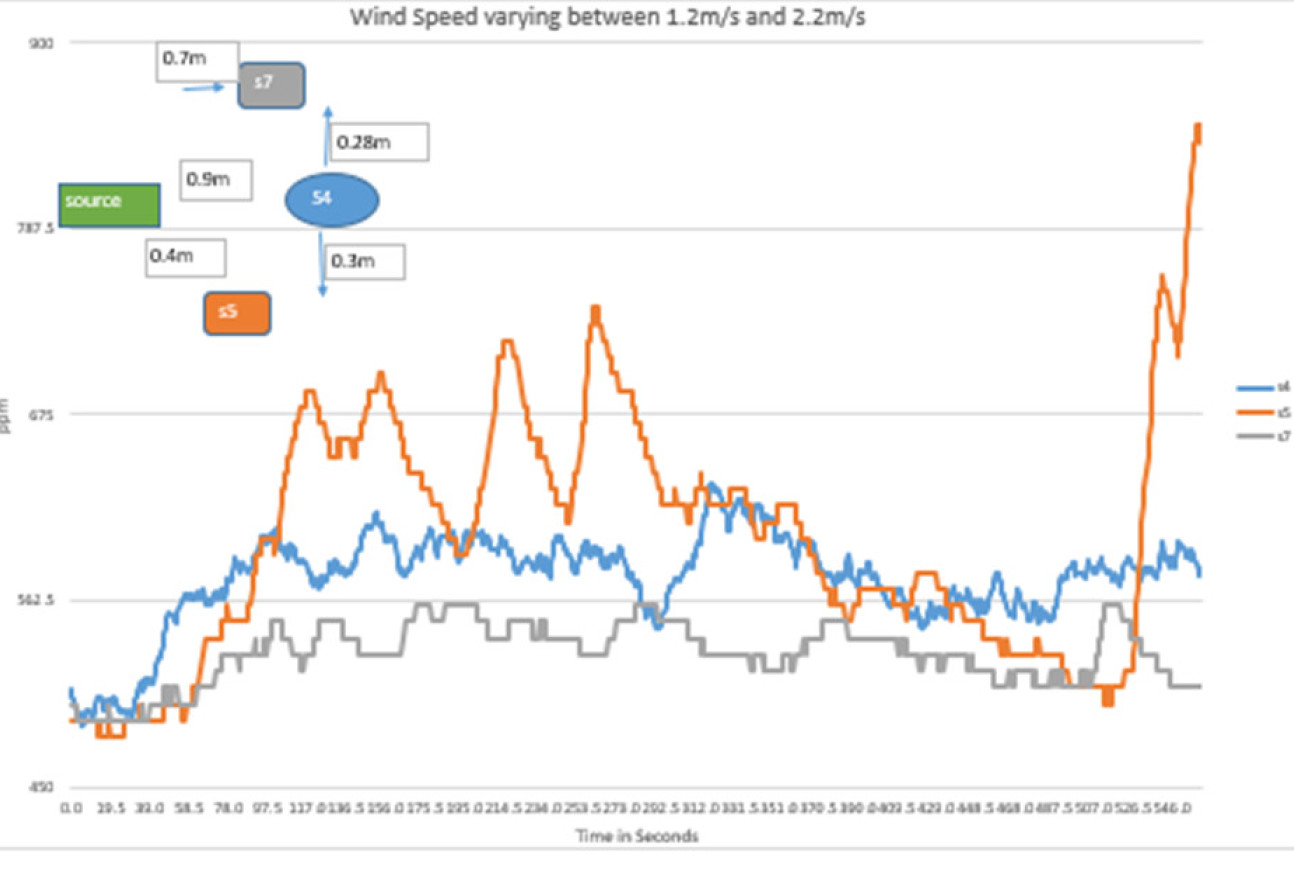 The blue curve represents the wake behind the subject’s head. It shows that the concentration level at a given point rises rapidly from its initial background level when the test subject starts to simulate pedalling a bicycle through the air with reasonably high exertion. The spike in the orange curve at the end of the test occurs when the subject deliberately moves his head and shows the importance of including representative body motion for each simulated exercise.

Alongside experiments with human test subjects, the team are performing experiments using manikins fitted with simulated breathing capability. The manikins allow for measurement techniques that are normally restricted with human subjects due to safety reasons. Because of this, the techniques can be widened to include strong laser sheet illumination and a greater range of tracers.

The experimental measurements are supported by a programme of numerical simulation of the same flows using Computational Fluid Dynamics (CFD), in which the Department has a great deal of expertise. The CFD simulations are detailed and time accurate, using Large Eddy Simulations of the turbulent flow with full representation of the thermodynamics of aerosol evaporation and droplet particle tracking.

As a result, the team can measure a much more detailed mapping of concentration and droplet size distributions and statistics of means and extremes. This extends to the region around the subject’s head and body and in the wake to as far downstream as necessary.

Dr James Hull, a Consultant Respiratory Physician at Royal Brompton Hospital is working with the Aeronautics team on the project

“This work should inform guidance on exercise precautions. This is vital so that we ensure that people remain physically active and do so in the safest way possible.”

"A unique characteristic of the AirSniffer units is their ability to measure wind speed and direction in both the vertical and horizontal axes. This, in turn, means that the units can more accurately measure air quality than all other electrochemical gas sensors on the market."

"Our specific involvement in the project was to provide the technology for Professor Sherwin and his team to obtain first-time quantitative data on the spread of droplets exhaled under normal and exercise conditions in free air."

"As it currently stands, there are no available studies which analyse the effects of aerodynamics when it comes to activities which involve motion/exercise. This lack of experimentality and reliable quantitative data has been the overarching motivation for this project."

"It has been an immense pleasure working with the Aeronautics team at Imperial. Particularly as AirSniffer has been able to contribute to what is an incredibly important experiment during these unprecedented times of COVID-19. We look forward to continuing this collaboration in the future.”

"I have known Professors Spencer Sherwin and Denis Doorly for over 15 years, and have been involved with numerous projects with the Department of Aeronautics, mostly related to blood flow in vascular grafts and stents. More recently I became involved again through the company AirPortal Ltd that Ali Yousefian and I own."

"AirPortal produces the AirSniffer unit which utilises latest technology sensors to measure a range of gases and particulates in moving air. We have been working with the Imperial College’s Department of Aeronautics to design ways of tracking pollutants as they move in the air around the built environment."

"As a consequence of the work we are already doing, Spencer and Denis approached us to consider the current COVID-19 related application. The AirSniffer unit can evaluate gaseous and droplet surrogates of SARS-COV-2 aerosols as they move through the air. The unique opportunity to do this in the Imperial wind tunnel – which is big enough to hold a cyclist or runner - was ideal for us."

"We believe that the outputs of work could describe the dispersal of potentially infectious aerosols from individuals in motion or from stationary patients in moving air. As such it could inform public health policy and help define best practice to avoid spread of COVID-19."

"Imperial College's Department of Aeronautics is a world-leading team and the chance to work with them on these projects is a fantastic opportunity for Airportal Ltd."