Forget goods you can see or products you can touch – 2018 is all about the intangible asset. Professor Jonathan Haskel explains why the rise and rise of the intangibles are having an impact on all aspects of economic life, from growth to inequality.

Early in the twenty-first century, a quiet revolution occurred. For the first time, the major developed economies began to invest more in intangible assets – such as design, branding, R&D and software – than in tangible assets, such as machinery, buildings and computers. Businesses such as Uber don’t own cars; they own software and data. Coffee bars and gyms rely on branding to help them stand out from the crowd. Pharmaceutical companies have vast budgets for marketing as well as research and development. This is capitalism – without capital.

As an economist and co-author of Capitalism Without Capital: The Rise of the Intangible Economy, I watched the February 2018 meltdown of Carillion with dismay. How could such an established company, the second largest construction company in the UK, listed on the stock exchange and with more than 40,000 employees worldwide, fail so spectacularly?

Many observers looked at the asset sheet and assumed that was where the problem lay. It was apparent that the company had little in the way of tangible assets – such as buildings, vehicles and machinery – and that, when push came to shove, there was nowhere for it to go. It was, some said, a salutary lesson in the perils of companies built on intangible assets. But, while it’s true that intangibles represented 77 per cent of Carillion’s non-cash assets, the real problems lay in the mix and type of intangibles on its balance sheet – and the foolish ways in which these assets were valued.

Not all investments are things you can touch. As well as machinery, vehicles and buildings (tangibles), companies also invest in R&D, design, creative work, market research and training (intangibles)."

It certainly doesn’t follow that intangible assets are a bad thing per se. After all, many businesses based on intangibles are wildly successful and eminently well run. Take Apple, for example, with its instantly recognisable brand, its elegant designs, its software, and its supply chain that enables it to bring new products to market quickly and in sufficient numbers to meet customer demand. Apple owns almost no tangible assets at all – but its intangible assets are clear sources of huge growth and long-term value.

In fact, for businesses of all kinds, investment in intangible assets has become increasingly important in recent decades – in R&D, branding, training, software, artistic creations, market research and business process reengineering, for example. At the same time, tangible investments have been declining. In some developed countries, including the UK, US and Sweden, they were outstripped by intangible investments some years ago.

To understand how economies perform and businesses innovate, you need to understand their different attributes. In the book, we refer to these attributes as ‘the four Ss’: scalability, sunkenness, spillovers and synergies. Why does this matter? Well, if intangible investments behave differently from tangible ones, then it follows that an economy dominated by intangibles is likely to behave differently from those we’ve seen in the past. In other words, its impacts on all of us are likely to be different too.

Here, the intangible economy could be causing, or at least contributing to, the problem in several ways. The first is simply an issue of mismeasurement: since intangible investments are harder to measure than buying a building or a fleet of vehicles, for example, these investments have not been accurately factored into estimates of business investment and GDP growth. Once rectified, however, we can see that this mismeasurement effect is pretty small.

More significantly, the scalability of intangibles has allowed very large and very profitable firms to emerge, ones that leave their competitors lagging behind. Laggards consequently have less incentive to invest; a larger, more successful company is better placed to appropriate the spillovers of a laggard’s intangible investments than vice versa. Finally, since intangible investment, just like tangible investment, has remained subdued since the financial crisis, spillover effects have been muted, too. In short, there have been fewer good ideas flying around to imitate.

Another key impact of the intangible economy – and one with particular public resonance – is inequality. In a city like London, we can see with our own eyes the construction work under way on luxury apartment blocks located just a stone’s throw from some of the UK’s most deprived communities. This pattern can been observed in most developed countries. The rich are getting richer and the poor are getting poorer – and there’s a clear case for arguing that this is down to the growth of intangible investment.

Just as the scalability of intangible investment favours large companies that come to dominate their market sector – by pouring money into new ideas, new technologies, new ways of doing things, new forms of creativity – so the employees who work for these companies do well in terms of pay. Their counterparts at smaller companies do less well, leading to income inequality.

The rise of the intangible economy holds clues to one of the most troubling and widely discussed puzzles in economics today: secular stagnation. In short, why has business investment and productivity growth remained stubbornly low in recent decades, even during the ‘recovery’ years since the 2008 financial crisis, despite low interest rates making it extremely cheap to borrow money?

Then there’s the effect of spillovers and synergies: these tend to flourish in cities, driving up property prices to the benefit of the rich. San Francisco is a case in point. Finally, intangible investments are mobile, in the sense that they can be easily shifted across corporate and geographic boundaries, making them harder to tax. In turn, that makes it harder to redistribute taxation in order to reduce wealth inequality.

In the business world of the future, a ‘good’ organisation will be one with managers in place to carefully coordinate sunk costs and spillovers, and exploit the opportunities that arise from scale and synergies. Managing large firms is hard, but managing large, intangible-intensive firms is even harder. When a company is building information and ideas, rather than physical objects, it becomes even more important to share information so that everyone understands the big picture of how their activities fit together. That is an important role for the modern manager. At the same time, the manager must also keep valuable knowledge workers on side. This is because if they leave the company, their tacit knowledge leaves with them. Unlike tangible assets, this asset cannot be secured by lock and key.

For financial investors, success in the intangible economy will be about understanding the complexity of intangible-rich firms. After all, their intangible assets are less certain sources of value and their accounts less useful, because finance departments tend to count intangible spending not as investments, but as day-to-day expenses. That means that the investor must rely on information beyond the usual financial statements. They must develop new insights into how firms are managed by leaders who motivate and inspire – and the results they are able to deliver.

Policy-makers, meanwhile, will need to focus on facilitating knowledge infrastructure, such as education, internet and communications technology, urban planning and public science spending. They will need to clarify intellectual property regulation – but not necessarily strengthen it, as this could damage productivity gains from synergies. Above all, they must tackle the inequality that arises from an economy reliant on intangibles.

I’d like to say I have the answers, but along with most politicians in the developed world, I don’t. What is clear is that this tension looks set to dominate the political and economic landscape for years to come. The country that is able to resolve it, however, will be on course for great prosperity.

THE FOUR ATTRIBUTES OF AN INTANGIBLE ASSET [THE FOUR Ss] 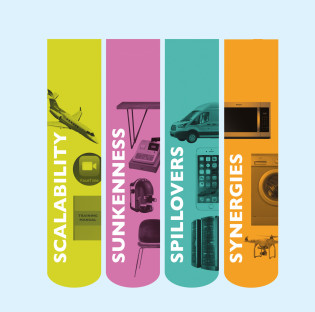 SCALABILITY: This refers to the way in which, once an intangible asset exists, it can be used over and over again, in multiple places at the same time – a mobile app, a training manual or a design for a jet engine, for example.

SUNKENNESS: This, meanwhile, is what we’ve seen at Carillion: once an intangible investment has been made, the resulting asset has little resale value.

SPILLOVERS: We also see how an intangible asset sometimes benefits companies beyond the one that originally invested in it. When Apple launched the iPhone, for example, it also launched the smartphone sector, with its rival handsets and operating systems.

SYNERGIES: Finally, intangible assets can be combined with others to create marketable products. Ideas can go well together, after all, as was seen when US defence contractor Raytheon and white-good manufacturer Amana combined their thinking on microwave technology and kitchen appliances, respectively, in order to invent the microwave oven.

About the authors of Capitalism Without Capital: Jonathan Haskel is Professor of Economics at Imperial and a member of the Financial Conduct Authority Competition Decisions Committee. In 2017 he won the Indigo Prize, celebrating radical and creative thinking measuring the modern economy. Stian Westlake is a policy adviser to the UK’s innovation Minister and a Senior Fellow at NESTA. He was previously at McKinsey.