Multiscale computational tools for Optogenetics, include a GUI and installations of NEURON and Brian. PyRhO project page.

A systematic investigation of the possible models of the ChR2 photocycle. The final model consists of two closed and two open states. Simulation results suggest that they might represent the dark-adapted and light-adapted branc 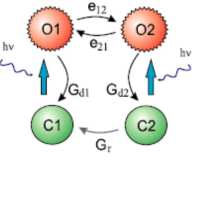 hes. It reveals an adaptation mechanism of the ChR2 molecule. Hence very simple organisms (such as green algae) expressing ChR2 can use this form of light adaptation. The model is widely used for functional modelling of the ChR2 photocycles. It is an essential tool for computational neuroscience simulations of neurons expressing ChR2. 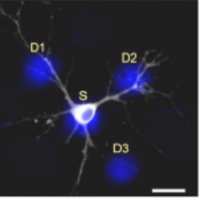 individual neurons or sections of dendritic tree. My role was in designing this device on the basis of insights gained from my models, and also analysing the experimental results and writing the paper.

An illustration of our optogenetic retinal prosthesis concept. Despite more than 25 years of efforts to create a viable retinal implant that goal still seems to be elusive. There are several clinical trials of electrical retinal implants with up to hundred electrodes which stimulate retinal ganglion cells, but all that blind patients are able to "see" are flashes of white noisy dots (phosphenes). However, the optogenetic route holds a new promise and it has been investigated by several groups. 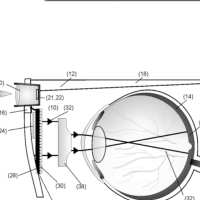