The recovery and re-use of low-grade waste heat and effective utilisation of renewable resources for heat and power provision are essential components of a sustainable energy future. In the UK, for example, natural gas consumption for heating purposes is double that of electricity, while in the domestic sector the demand for heat is currently somewhere between 3 and 5 times that of electricity, even though the energy debate focuses mainly on the latter. The availability of most alternative energy sources (e.g. solar, wind) exhibits appreciable fluctuations (caused by day-night cycles, weather, etc.), while the consumption also fluctuates considerably, according to users’ needs. The resulting mismatch between energy supply and demand gives rise to a need for reliable and efficient energy storage systems to smooth out the imbalance. A disparity between supply and demand is also an important factor that arises when considering the opportunities for low-grade waste heat utilisation, which is abundantly available in the industrial and commercial sectors, and also in the domestic environment, especially when considering ‘over the fence’ solutions which offer an improved scenario, both from an investment and an emission reduction perspective, over the self-contained re-use and/or conversion of heat within individual plants.

The research activities conducted by the Energy Division are:

The heat and power division team is focused on technologies for thermal energy conversion and utilization; in particular, the low grade heat from renewable energy sources (solar and geothermal) and the waste heat from industrial processes. Many industrial processes produce immense amounts of thermal energy, albeit at low temperatures for which the Carnot efficiency that limits conversion to power is inherently low. The conversion of low grade heat into electricity can be achieved by means of Organic Rankine Cycle (ORC) systems, which are capable of converting this low grade heat more efficiently compared to conventional steam Rankine cycle systems.

This research aims to investigate how to make ORC systems capable of converting this low grade heat more efficiently. Previous research indicates that the main components which destroy exergy in ORC systems are the evaporator (heat exchanger) and expander. Therefore, the main focus of this research is to improve the exergy efficiency of these two components.

Work on expanders focuses on the use of volumetric machines, such as the reciprocating expander, as alternatives for conventional turbines in small-scale applications. In the evaporator, exergetic losses occur as a result of large temperature differences between the heat source and the cycle. The use of zeotropic working fluid mixtures can provide a better thermal match, thereby improving thermodynamic efficiency and power output from the ORC. Therefore, investigation of novel working fluid mixtures and additives which will further improve heat exchanger performance is essential.

Alternative heat engines for the conversion of low-grade heat to useful work are also being researched. The heat and power division is involved in the European Up-THERM project, which is aiming to provide an affordable alternative to conventional heat engine prime-movers for combined heat and power (CHP) applications (for more information see the Up-THERM project summary).

The group is also leading the “Energy-Use Minimisation via High Performance Heat-Power-Cooling Conversion and Integration: A Holistic Molecules to Technologies to Systems Approach” project (iHPC). The project is a four-year multidisciplinary project funded by the Engineering and Physical Sciences Research Council (EPSRC) aimed at minimising primary-energy use in UK industry with next-generation technological solutions for waste heat recovery and conversion to power or cooling.

The IEA projects that solar energy has the potential to cover one-third of the world’s energy consumption by 2060, while solar-thermal technologies in particular can make a significant contribution to primary fuel and emissions reduction targets, and energy security. A key challenge is in enabling feasibility in regions of low irradiance and at small scales of application where land area is limited. Solar thermal collectors are a mature technology for the conversion of the solar irradiance into thermal energy for industrial, commercial or domestic application. The solar irradiance can be converted directly into electricity by means of solar cells. Low-temperature thermodynamic cycles for thermal energy conversion, such as organic Rankine cycle (ORC) technology, offer the possibility of using simple and affordable non-concentrating solar collectors in small systems.

The Heat and Power Division is interested in whole-system modelling of the solar ORC as part of a versatile, co-generation (heating and power) or tri-generation (cooling, heating and power) system. Such a system has potential for domestic applications, where they can be integrated with conventional solar hot-water systems at low cost (Section 2.1).

Photovoltaic (PV) cells for the direct conversion of solar radiation to electricity also produce a significant amount of low-grade waste heat. The solar to electricity conversion efficiency of PV cells can be improved by cooling down the cells with a cooling medium. The low grade heat obtained from such a hybrid PV/thermal collector (PV/T) can be used in domestic heating applications or employed for cooling via an absorption refrigeration cycle (Section 2.2). 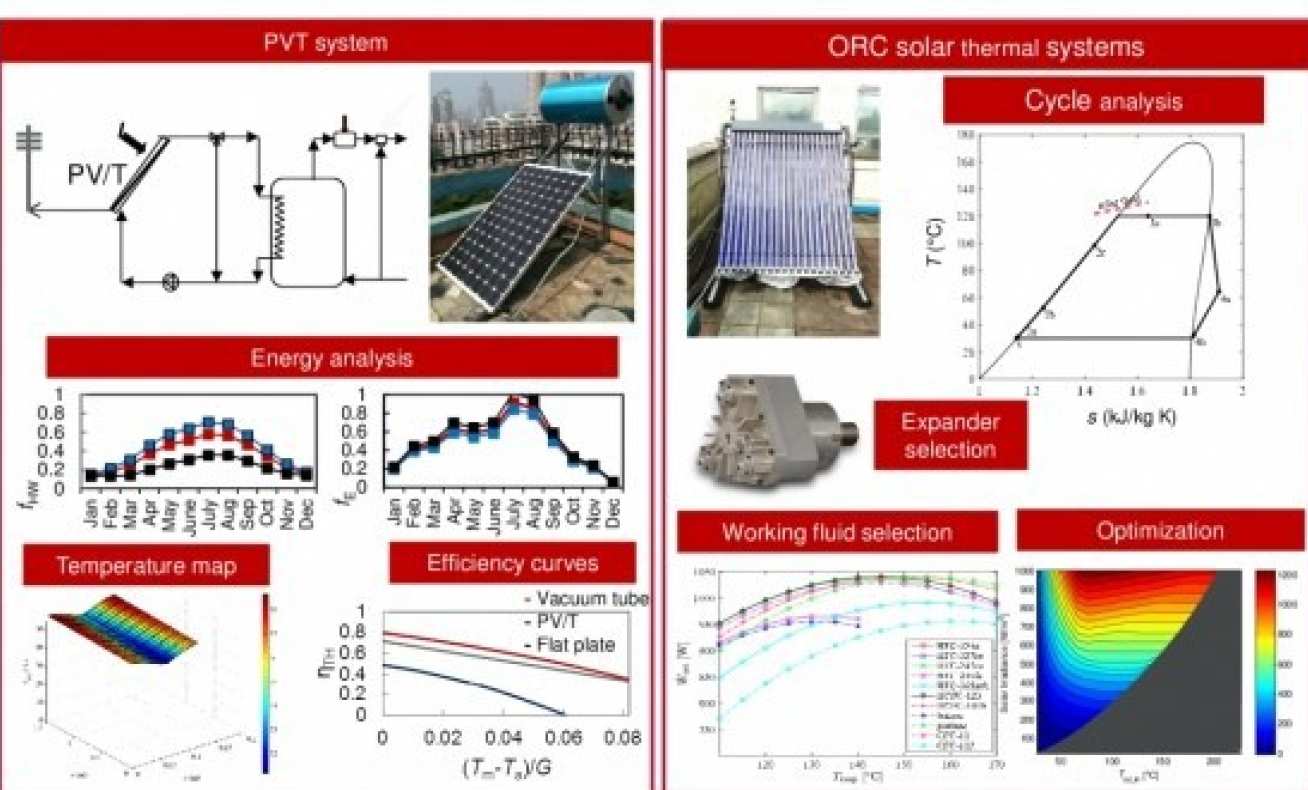 The CEP laboratory is currently investigating the use of thermally-powered absorption refrigeration systems in solar cooling and combined cooling, heat and power (CCHP or trigeneration) systems. Thermally-powered refrigeration technologies such as the ammonia-water Diffusion Absorption Refrigeration (DAR) cycle can be easily integrated with solar thermal collectors to provide solar-powered cooling. The DAR cycle exploits the principle of partial pressure to provide cooling, through the use of an auxiliary gas in the evaporator (typically hydrogen or helium). DAR systems use bubble-pumps for fluid circulation (hence have no moving parts) and can be manufactured as single-piece units suitable for small-scale (< 1kW output) low-cost applications.

A solar ORC engine uses an organic working fluid (e.g. a HFC or hydrocarbon-based refrigerant) instead of water/steam as in the conventional Rankine power-cycle. The thermal energy needed to evaporate the working fluid is provided by solar thermal collectors. The heat rejected during de-superheating and condensation may also be used for useful downstream processes such as water heating.

The performance of renewable energy (and particularly solar power) systems can vary significantly with location. In order to optimise the design of a solar combined heat and power (SCHP) system for the UK, a dynamic system model was constructed in MATLAB (Freeman et al. 2015). The model allows the various system configurations to be simulated under realistic climate conditions. The results of the annual simulation are used to select an appropriate working fluid and evaporation temperature for the ORC engine.

An ORC rig was constructed in the CEP lab in order to characterise the performance of all system components over a wide range of operating conditions. Heat input is provided by an electrical oil heater, mimicking the thermal output of a solar thermal collector array installed on the roof of the Department.

The CEP laboratory is currently investigating for the development of High-Temperature High-Efficiency Hybrid PV-Thermal Solar Systems. Custom PV-T HIT solar cells capable of full infra-red absorption for thermal generation and high efficiency at high operation temperatures are ideal for PV-T applications. Research at the Heat and Power Division is centered in the modelling, design, fabrication and testing of the proposed PV-collector as part of a wider solar-energy-based heat, power and cooling (solar-based tri-generation) system. Collector-unit models will be incorporated into ‘system’ models of a complete energy infrastructure capable of the combined provision of heat-power-cooling, which will then be used to design PV-T collectors with optimal flow rates and geometries in chosen cases (specifically, maximising the thermal output, electrical output, and cooling capacity with suitable sub-systems technologies, as well as minimising emissions, and maximising flexibility/demand tracking). For more information, visit 'project website'.

One of the research activities of the group involves the design of low-carbon technologies specifically targeted for heat decarbonisation. This involves the development of holistic, multiscale modelling frameworks, within which alternative heat provision solutions are compared and simultaneously optimised (design, operation) in an effort to replace widely-used gas boilers. Focus is placed on the detailed modelling of relevant technologies in order to capture the complex characteristics and trade-offs between underlying components and materials of the possible solutions within whole-energy system models, thereby providing insights not only to policy makers and system operators, but also to technology manufacturers and installers, along with innovative, optimal designs from a whole-system perspective. This research is a core element of EPSRC Programme Grant ‘Integrated Development of Low-Carbon Energy Systems’ (IDLES), within which collaboration is required with research groups across a number of Departments at Imperial (Electrical Engineering, Business School, CEP, etc.) as well as external partners (EDF, ABB, IBM, etc.).

Recent progress includes the development of comprehensive technoeconomic models of single-stage-compressor low-temperature heat pumps (air-source, ground-source), which combine dedicated heat-exchanger models, compressor efficiency maps and suitable equipment costing techniques to assess various designs with alternative, ‘green’ working fluids. These are been utilised to provide reliable off-design performance characteristics to whole-energy capacity-expansion and unit-dispatch models focusing on the electrification of heat, assessing the implications on the generation mix of the future energy network. Investment and operation decisions at the end-use level can significantly contribute to attenuating impacts of electrification on the power grid.

Cost and performance data for relevant heating technologies (heat pumps, cogeneration systems, boilers etc.,) were acquired for hundreds of commercial units by conducting an extensive analysis of the UK market. Data from this analysis is used in a comprehensive comparison of combined heat and power (CHP) systems and heat pumps in centralised and distributed heating systems. The novelty of our work lies in the use the thermo-economic models (data-driven, thermodynamic, sizing/costing) to capture realistic technology characteristics (scale effects and off-design performance) and therefore provide an informed comparison of the possible technology and design/sizing options from a whole-energy system’s perspective. Unncertainty propagation analysis is also conducted to quantify the uncertainty on the final results with multi-fidelity approaches and demonstrate the necessity of using refined comprehensive design models to reliably capture the full potential of considered technologies.

The desire to utilise energy efficiently has led recently to an increased interest in thermal energy storage (TES) systems. TES can play a vital role in future energy systems, by enabling a reduction in the discordance (in time or rate) between the production or availability of energy and its consumption. By storing thermal energy locally, for later use when this is required (i.e. for space heating, or hot water), the peak energy load can be reduced and a lower-cost, off-peak energy input utilised instead.

The integration of latent heat storage solutions into modern heating and cooling systems has the potential to enhance the overall system performance compared to standard hot-water systems (radiators and tanks) due to an augmentation of the stored heat by the latent heat of a suitable material.

Aiming to characterise the dynamic behaviour and performance of an active thermal storage system for domestic applications, CEP has undertaken an investigation involving computational predictions complemented by experimental measurements in order to capture the time-varying interplay between fluid flow and heat transfer in a system based on the use of a hydrated salt Phase Change Material (PCM).

Computational modelling makes use of CFD toolbox OpenFOAM®. The CEP laboratory is also equipped with facilities for the experimental study of TES systems.

Thermodynamic models of these technologies are used for their technical performance analysis and the identification of influential parameters. Preliminary economic assessments are undertaken based on economic models which also account for the thermodynamic characteristics associated with each technology for its charging, storage and discharging elements. Economic evaluations consider different cost components such as initial capital expenditure, energy costs, and operational and maintenance costs. Also, financial indicators such as power capital costs (i.e. capital cost divided by power capacity), energy capital costs (i.e. capital cost divided by the energy capacity), levelised cost of storage, and required sell-to-buy electricity prices are studied and compared for the different systems.

The economic competitiveness of newly proposed technologies can be challenging due to the lack of cost data or case studies. The combination of thermodynamic and economic analyses through a thermo-economic framework can give estimates of the technical and economic competitiveness of these systems under different scenarios as well as in comparison to other electricity storage technologies.