[7/12/17] How to include noise in dynamic density functional theory? Using elements from probability theory and stochastic calculus, our recently published article in the New Journal of Physics offers a rigorous derivation of fluctuating hydrodynamics (FH), stipulated a long time ago by Landau and Lifshitz. In particular, it is shown that FH has a direct link with classical density functional theory (DFT), which is found to be the most-likely realisation of FH. This advances the long-standing debate, and in fact provides closure to this debate, in the classical density-functional-theory community about the inclusion of fluctuations in DFT. But even more, it opens the door to the discovery of new physical laws governing the dynamics of soft-matter systems out-of-equilibrium under noise-governed conditions.

[8/11/17] Discrete self-similarity and the formation of iterated structures.  Iterated patterns are "patterns within patterns" where the same structure repeats itself at different time- and lengthscales. We found, for the first time, a scenario in which such structures may appear via a bifurcation from self-similar solutions to discretely self-similar ones where scale invariance occurs only at discrete times, resulting in the infinite repetition of some pattern at a discrete sequence of time and length scales. Discrete self-similarity has proven to be present at some instances of gravitational collapse and has also been proposed as a mechanism for the development of turbulence and formation of singularities in Euler’s equation through chaotic self-similarity. Our study reveals the mechanism for discrete self-similarity and ensuing complexity on all scales via a model system consisting of a reduced-order hydrodynamic evolution equation.

Our study has been accepted for publication in Physical Review Letters and also received great publicity at the recent Annual Meeting of the American Physical Society Division of Fluid Dynamics (APS-DFD Meeting) at Denver, in particular the Sanley Corrsin Award Lecture by Prof. Jens Eggers, Bristol University, who spent part of his Award Lecture summarising our results: 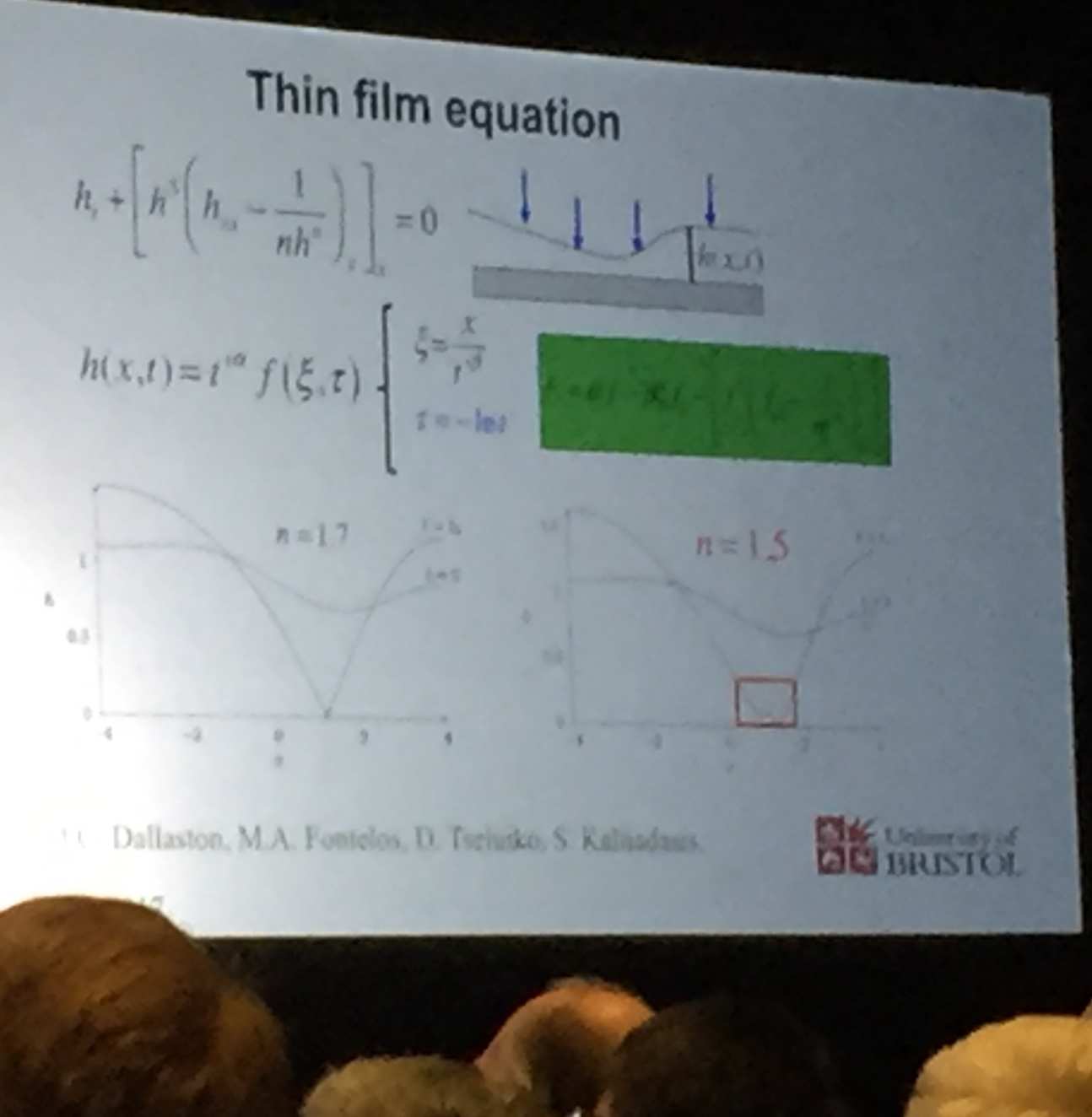 [22/06/17] Get together of group members and friends to celebrate Dr Michael Dallaston’s recent success of securing a Lectureship in Mathematics at Coventry University.

[30/05/17] Prof. Serafim Kalliadasis gave an invited lecture at the CECAM Workshop on State of the Art in Mesoscale and Multiscale Modeling, School of Physics, University College Dublin, Dublin, Ireland.

[10/04/17] The British Applied Mathematics Colloquium (BAMC) now has a dedicated session on density functional theory (DFT), largely due to the group's intensive efforts over the last few years in disseminating our DFT work on this and other conferences, both in the UK and overseas.

[05/04/17] Congratulations to group member Peter Yatsyshin for wining the prestigious Sir William Wakeham award for his highly novel theoretical-computational work in statistical physics and classical density functional theory for fluids. The award panel, which was chaired by Prof Julia Higgins (in photos below), and included Profs Geoff Maitland, Paul Luckham, George Jackson (in photos below) and Dr Kyra Campbell, has commend Peter’s outstanding research achievements and excellent teaching activities. The award was presented at the annual departmental Post-Doc Symposium on April 27th, where Peter was an invited speaker. 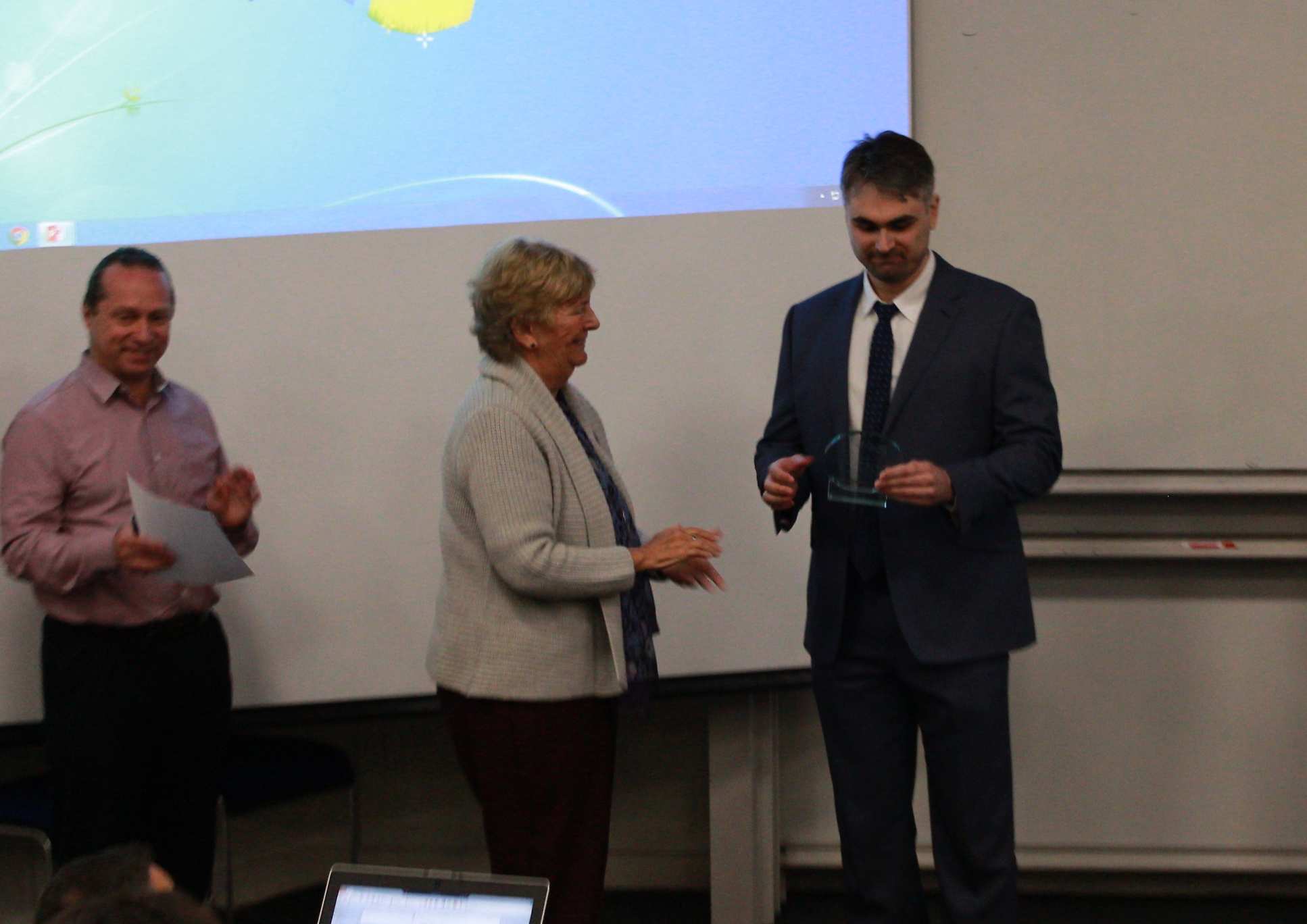 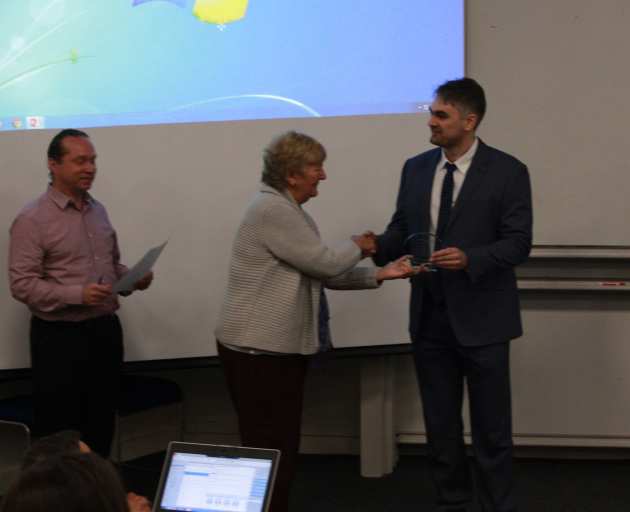 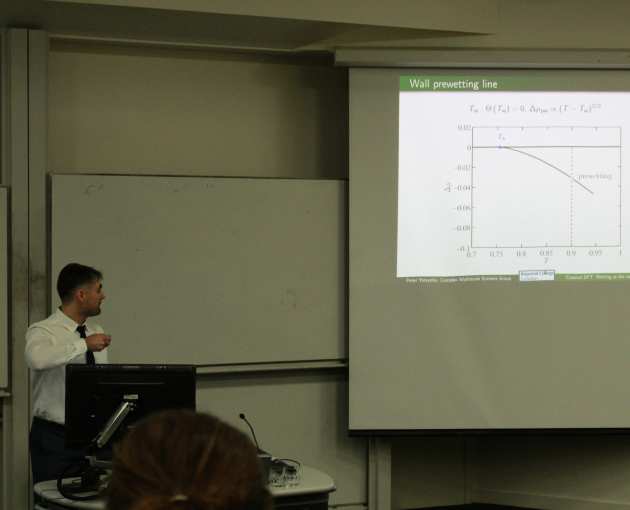 [08/03/17] Prof. Serafim Kalliadasis gave a seminar at School of Mathematics, The University of Manchester, as part of their Physical Applied Mathematics seminar series.

[28/01/17] A novel numerical scheme for classical density functional theory (DFT) and all its approximations including fundamental measure theory (FMT).  Our efforts to develop novel, efficient and systematic numerical schemes for the equations of DFT and its dynamics extensions (DDFTs) governing fluid and soft matter dynamics, including our own general DDFT framework we developed a few years ago (Phys. Rev. Lett. and J. Phys.: Condens. Matter), culminated in an article at the Journal of Computational Physics (PDF). The numerical scheme is based on an appropriately modified accurate and robust pseudo-spectral method that allows to solve the (D)DFT equations — and their approximations including FMT — in bounded and unbounded domains.

[09/01/17] Prof. Serafim Kalliadasis gave an invited talk at the XLVI Winter meeting on Statistical Physics 2017 at Taxco, Guerrero, Mexico. The title of his talk was “Complex dynamics in multiscale systems”.