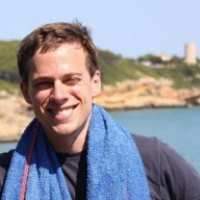 I am a PhD student under the joint supervision of Prof. Grigorios Pavliotis and Prof. Serafim Kalliadasis. Before my PhD, I obtained an MRes in Mathematical Sciences from Imperial College London and an MSc in Mechanical Engineering from the Université catholique de Louvain.

During my MSc thesis, under the supervision of Jean-François Remacle, I focused on the development of a discontinuous Galerkin method for the Kirchhoff-Love equation, widely used to study the deformation of thin plates subjected to external forces and moments. In the first part of the project, the method was implemented and pre-existing theoretical findings were confirmed by means of numerical experiments. In the second part, an analysis was carried out to determine the dispersion and dissipation errors introduced by the numerical scheme, and the method was extended to study buckling phenomena.

During my MRes and the first half of my PhD, I worked in the Department of Mathematics on the investigation, through rigorous analysis and numerical experiments, of a spectral method based on Hermite polynomials for multiscale stochastic equations. Error estimates for the super-algebraic convergence of the method were proven and confirmed numerically with a number of examples, and the method was shown to work extremely well for the simulation of multiscale stochastic partial differential equations.

After joining the Complex Multiscale Systems group in March 2016, I began to work with Benjamin Aymard on the development of a finite element method to solve the Cahn-Hilliard equation in complex geometries, with the aim of tackling specific engineering problems in multiphase flows. One application that we are particularly interested in is the separation of gas-liquid mixtures using a micro-engineering device.