There has been much debate about whether mantle plumes exist and if so how many there are and what their nature is. Some first tomographic images of whole mantle plumes have emerged, but these features are difficult to resolve seismically and until now there is limited agreement between different models on the location and geometry of plume anomalies. We have been working on forward modelling what a seismic plume signature might look like, for dynamically plausible plumes. 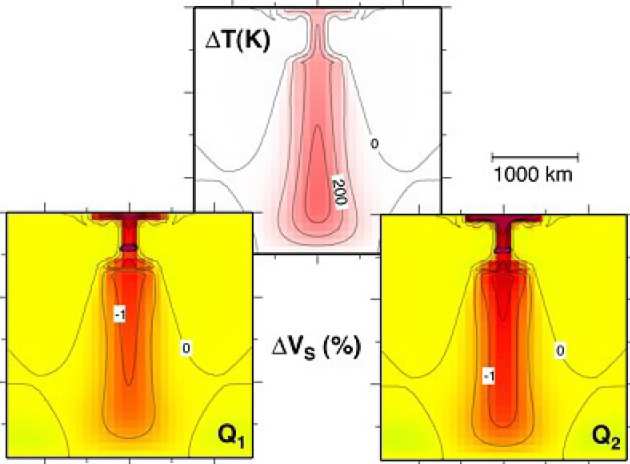 For a large range of likely mantle viscosity, expansivity and conductivity structures, thermal whole mantle plumes attain a similar amplitude and width, close to that displayed in the top panel. The bottom two panels show two translations of this thermal structure to S velocity anomalies. The two velocity structures differ in the assumed temperature dependence of anelasticity (Q). Tomographically imaged anomalies attributed to plumes have widths and amplitudes similar to these models. However, plume buoyancy fluxes inferred from surface observations are generally (much) lower than those expected from thermal whole mantle plumes, indicating that compositionally dense material may affect plume dynamics (from Goes et al. 2004)