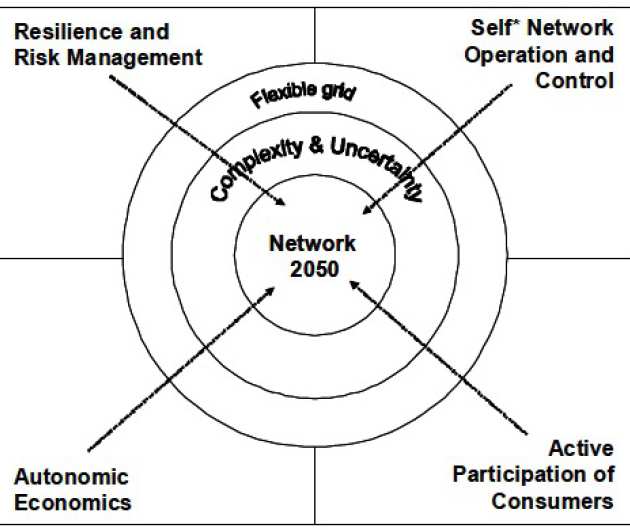 This multi-disciplinary EPSRC project focuses on the electricity system of 2050, characterised by increasing energy prices; increased variability in the availability of generation; reduced system inertia; increased utilisation due to growth of loads such as electric vehicles and heat pumps; electric vehicles as randomly moving loads and energy storage; increased levels of distributed generation; a more diverse range of energy sources contributing to electricity generation; and increased customer participation in system operation. In this context, we are expected to witness new physical and commercial patterns of consumption, a high degree of operational / short-term (due to massive use of stochastic sources of renewable energy and changes in demand scale, profile and behavioural patterns) and planning / long-term (in terms of the size and location of sources, sinks and links in the network) uncertainty, and a high degree of complexity due to the large number of diverse and independently controlled devices.

The main research question addressed is whether a fully distributed intelligence and control philosophy can deliver the future flexible grids required to facilitate the low carbon transition, allow for the adoption of emerging game changing network technologies and cope with the accompanying increase in uncertainty and complexity. Additionally, it considers to what extent intelligence and decentralised decision-making can displace investments in copper, steel and concrete, i.e. the standard solutions to capacity issues. In this context, the project aims at the design of an autonomic power system, which relies on distributed intelligence and localised goal setting. The autonomic power system is a completely integrated and distributed control philosophy which self-manages and optimises all network operational decisions in real time. No centralised control is evident, and behaviour emerges from low-level interactions.

Goran Strbac has been leading the Work Package Autonomic Economics, which explores novel frameworks, methodologies, and models for decentralised / localised economic decision making in both operational and planning timescales. In terms of operational economics, the traditional centralised trading philosophy with a small number of participants and a single objective will not be able to support the vision of widespread market participation of millions of small generators, consumers and prosumers that are not willing to disclose their private information. Research in this WP aims at developing a framework of fully decentralised trading, respecting the limited available network capacity and incorporating business models of different participants. In terms of investment economics, decisions on network reinforcement are also made centrally, using a top-down approach to achieve a single objective. In a similar vein with short-term economics, a bottom-up approach allowing users with different objectives to support investment projects and tackling relevant uncertainties is envisaged.

Dimitrios Papadaskalopoulos has been working on the development of a distributed coordination approach producing system operation solutions of proven global optimality without assuming centralized knowledge of any distributed energy resources (DER) characteristics, in order to avoid communication, computational and privacy limitations. This is achieved through the iterative exchange of price signals and DER responses, founded on dual decomposition principles. In order to address the challenge of DER response synchronisation at the lowest/highest-priced time periods and the resulting creation of new demand peaks with adverse economic and technical effects, different measures have been explored and compared. The applicability and effectiveness of the proposed mechanism in has been demonstrated through several case studies in both national electricity markets and local distribution network management contexts, considering the inter-temporal operational complexities of different DER, such as smart charging electric vehicles, heat pumps, deferrable wet appliances, energy storage and micro-generators.

Antonio de Paola has also been exploring distributed management of DER, addressing response synchronization effects. However, in this stream of work, a very large number of small DER are modelled as competitive rational players and mean-field game theory is applied to account for the interactions between the strategies of a single DER and the rest of the population, in order to reach a stable solution of the coordination problem. Through the resolution of Coupled Partial Differential Equations (PDEs), it is possible to calculate a distributed control strategy for the devices which induces a Nash Equilibrium in the system. The case of micro-storage devices owned by domestic consumers has been considered to exemplify the concept.

Roberto Moreira has been working on new tools for optimal allocation of DER services across different and potentially conflicting sectors adopting a bottom-up “DER centric” modelling framework, in order to facilitate market based investment in flexible DER in future systems. This work has developed a stochastic optimization algorithm maximising the profits of storage DER by optimising resource allocation in multiple market segments, including energy, reserve, frequency response, and distribution congestion management markets. A stochastic approach has been employed in order to address uncertainty in market prices and balance rewards against risks.

Panagiotis Fatouros has been working on modelling uncertainty in different flexible loads’ operating characteristics making use of available data from trials and surveys on consumers’ behaviour. These models are incorporated into a stochastic optimization framework to quantify the cost of uncertainty and therefore the reduction of the potential value of flexible demand due to the users’ uncertain preferences and requirements. Potential areas of application include the uncertain response of domestic, commercial and industrial consumers to dynamic pricing, the uncertain travelling times and energy requirements of electric vehicles, and the uncertain time of use of domestic appliances.

Fan Ying has been investigating an alternative network planning framework, where instead of relying on a central entity deciding on transmission network capacity by maximising social welfare, market participants (including generation companies and coalitions of consumers) have the opportunity to finance their own network projects. This work adopts a game-theoretic framework to capture the impact of strategic investments aiming at manipulating locational prices and exercising market power. Nash equilibria of the formulated game are sought through both analytical and iterative algorithms, and measures to reach transparent, compromising solutions when a Nash equilibrium does not exist or cannot be easily reached are explored.

Spyros Giannelos has been exploring a stochastic approach capturing the value of flexibility in long-term decision-making, demonstrating that smart technologies may offer the possibility to defer a costly conventional reinforcement until the uncertainty about the state of the system is partially resolved. A stochastic optimization algorithm is used to assess this value, where uncertainty is incorporated as a multi-stage scenario tree. The work has so far focused on distribution network planning with uncertain volume and location of PV, and smart technologies including soft normally-open points, coordinated voltage control and demand side response.

Yang Yang has been investigating and developing techniques, methods and algorithms for quantifying the risk profile of the APS, which will primarily depend on advanced control technologies performing various automatic corrective actions based on local and wide area measurements, rather than investment in assets redundancy. His research includes modeling of the reliability performance of the APS information and communication infrastructure through the application of failure mode and effect analysis. In the same context, it also explores various forms of probabilistic modeling techniques primarily based on Markov chains and Monte Carlo simulation, supported by detailed time domain dynamic simulations, in order to investigate system responses.

Hadi Karimi Khouzani has been developing a novel conceptual framework facilitating the inclusion of ultimate consumers’ choice in distribution network operation and planning decisions. Instead of relying on a perceived, uniform valuation of electricity supply by all consumers, this framework allows the latter to determine themselves the differentiated value they place on electricity supply. In combination with the introduction of locational pricing at the distribution level, this leads to a regime where consumers with higher valuation of supply enjoy higher reliability at the expense of a higher network charge, while consumers with lower valuation of supply are rewarded for their higher willingness to provide demand response during contingencies through lower network charges.