The objective of the eStorage project is to develop cost-effective solutions for the widespread deployment of flexible, reliable, GWh-scale storage across EU, and to enhance grid management systems to allow the integration of large share of renewable.

The key issue to be addressed in the project is the need for power regulation during low demand periods, when only inflexible baseload generation and intermittent renewable generation are operating. In contrast to conventional generation, a storage plant able to regulate its consumption could help to avoid curtailing wind. Conventional Pumped Storage Hydro Plants (PSP) can only regulate their power in generation mode; variable speed technology for PSP can bring the additional flexibility in pumping mode as well. Developing technically and economically feasible solutions in eStorage will allow upgrading a significant part of European PSP capacity to variable speed, providing up to 10 GW of additional regulation capability with no environmental impact and little administrative burden, all at a much lower cost than developing new plants.

The project will also develop and demonstrate solutions for coupling the dispatch of storage plants with renewable generation using advances Energy Management Systems. This will enable storage plants to maximise their value in the balancing markets. From simulation studies, demonstration results and storage potential analysis we will evaluate the system-level benefits of storage and identify development barriers in order to draw recommendations for efficient market and regulatory framework to maximise the impact of project outcomes. eStorage gathers major stakeholders from the entire value chain across EU: Elia – TSO, EDF – Generation Company, Imperial College – Academic Institution, Kema – Engineering Consultancy and Alstom – Equipment Manufacturer. 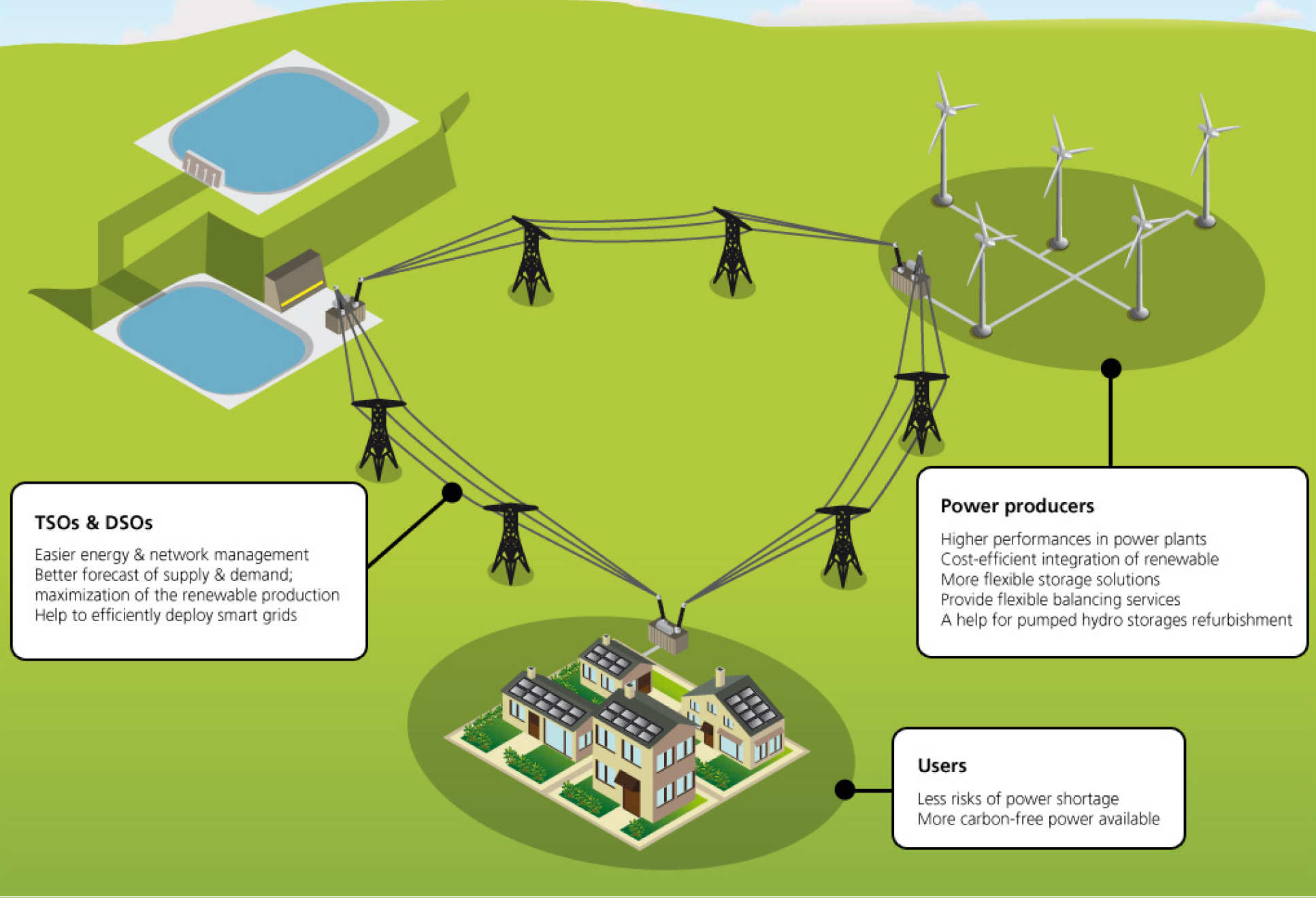 EU electricity system is facing changes on an unprecedented scale. Meeting climate change targets requires that massive amounts of wind and other intermittent renewable capacity are added to the system. According to the Strategic Energy Technology Plan (SET Plan), the EU’s objective is to strongly encourage the development of renewable technologies; the vision of SET Plan is wind power contributing with up to 20%, and solar power with up to 15% of total EU electricity supply by 2020. The contribution of renewable electricity is expected to increase even further beyond the 2020 horizon.

Electricity produced from intermittent renewable sources is highly variable in time, difficult to predict and cannot be controlled apart from curtailing their electricity output. This is very different from the majority of conventional generation that not only provides energy but also vital control services (energy and network balancing) necessary to maintain integrity of the power system.

Integration of significant intermittent renewables in the EU electricity system in 2020 and beyond will impose a very considerable demand for additional flexibility, particularly ancillary services associated with system balancing. Increased requirements for real-time ancillary services, if provided by conventional generation running part-loaded, will not only reduce efficiency of system operation but will significantly undermine the ability of the EU system to absorb intermittent renewable output, increase emissions and drive up cost for the consumer.

The key barrier to the cost-effective integration of intermittent renewables is the necessity to deliver increased levels of ancillary services, with synchronised conventional generation units as the main source. Due to dynamic constraints, provision of real-time balancing services by conventional plants is inevitably accompanied with delivery of energy. In other words, conventional generation technologies such as large coal, gas or nuclear plants, given their typical dynamic constraints, can only provide the ancillary services for real-time balancing when operating part-loaded and also generating a significant amount of electricity that is unwanted, particularly during night periods when demand is low. This becomes a major problem during off-peak i.e. night hours, particularly if combined with high renewable output, as there can be a surplus of available electricity, and the only means to balance the system is to resort to curtailing renewable output, which is highly undesirable. 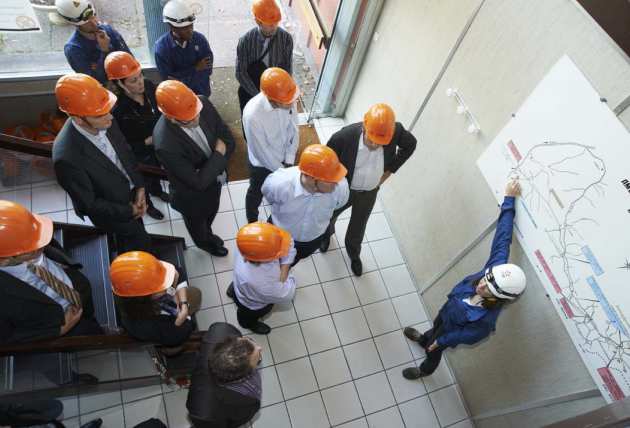 In contrast, Pumped Storage Hydro Plants (PSP), when equipped with variable speed technology (which is not the case at present), could vary the level of load in the pumping mode much more flexibly and hence provide ancillary services cost-effectively even during low-demand conditions, while significantly enhancing the capability of the system to absorb increased intermittent renewables. This project hence proposes to demonstrate the technical feasibility and cost-effectiveness of retrofitting an existing PSP with variable speed technology. This proposal is particularly appealing as there is currently around 40 GW of PSP installed in Europe. They are typically used to pump water i.e. store energy during night hours, in order to be able to generate electricity later, typically during system peak load hours. However, when operating in pumping mode, a large majority of PSPs have limited operational flexibility, as their pumping units can only be used either at full power or switched off. Due to this lack of flexibility in pumping mode, the existing design of PSPs cannot offer the same range of flexible balancing services as in generating mode, although the need for such services in future will be the greatest at times when PSPs normally operate in pumping mode.

In order to tap into this vast potential source of flexibility, this project proposes to investigate and demonstrate the option of retrofitting existing PSPs with variable speed motor-generator. This proposition is especially attractive given that up to 30 GW of PSP capacity will need to be refurbished in any case by 2020. The variable speed technology would enable PSPs to continuously provide flexible balancing services both in generating and in pumping mode, thus replacing costly provision of these services by part-loaded conventional generators and most importantly greatly enhancing the ability of the EU system to absorb significant amounts of intermittent generation. The cost of retrofitting to variable speed is an order of magnitude lower than the construction cost of new plants. This is hence a very cost-effective approach of developing a new source of flexibility that would greatly enhance the ability of the EU system to absorb increased levels of intermittent renewables. Enhancing the capability of the existing PSPs also avoids the highly complex planning and environmental permitting procedures, making this option highly acceptable from the societal perspective. 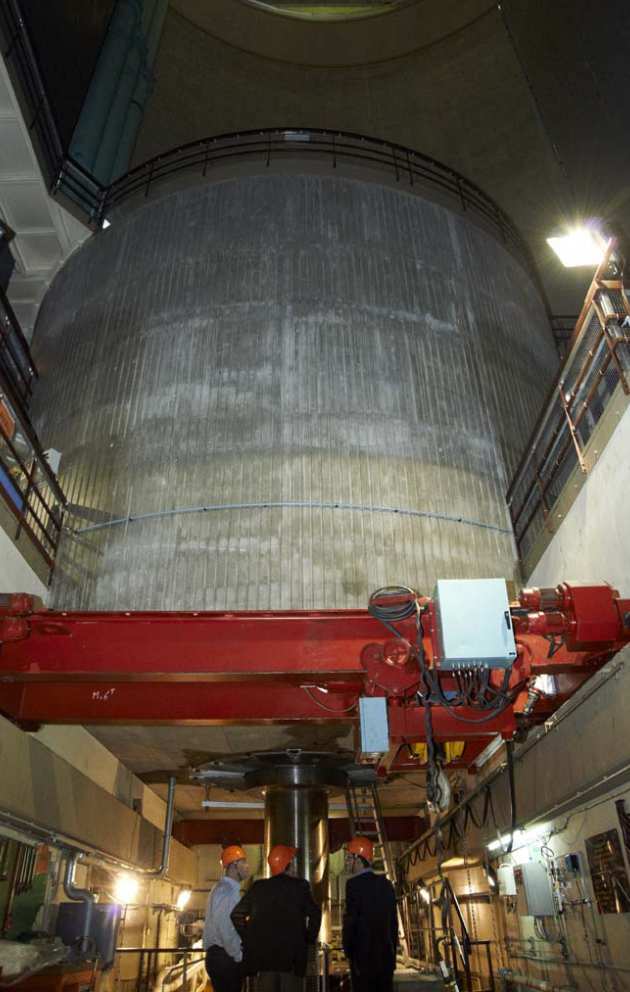 It is therefore the objective of this project to demonstrate the technical and economic feasibility of converting an existing PSP to variable speed technology, and use the insights thus obtained to investigate the requirements and implications of an EU-wide rollout of this technology in order to significantly improve the ability of the system to accommodate large penetration of intermittent renewable sources.

At present, flexible ancillary services are not widely shared across national systems. In order to enable sharing of ancillary services provided by the converted PSPs to variable speed technology across EU regions the existing IT infrastructure for real-time system management needs to be enhanced as it may present a barrier for efficient integration of flexible services. This project will therefore aim to enhance and validate the functionality of IT systems, in order to demonstrate new balancing capabilities by looking at closer to realtime market systems whilst enforcing network constraints.

Furthermore, today’s electricity market rules and regulatory framework are unable to adequately reward the providers of real-time flexible balancing services, given that its design was based on predominantly conventional generation system. For that reason, the eStorage project will investigate the gaps and barriers in current market and regulatory regimes in Europe, in order to create a viable business model for energy storage and enable a wide deployment of flexible storage technologies in the EU. By compensating the flexible providers for the value of their services, the new market rules should enable a more cost-efficient integration of renewables into future European electricity system.

CAP people involved in the project

External partners involved in the project