Description:Sn-0.7Cu-0.05Ni has been used as a Pb-free solder since 1999 and has become a popular choice for wave-soldering. This project seeks to understand microstructure formation during reflow soldering and microstructure evolution in service when any Sn-Cu-Ni alloy is soldered to Cu or Ni substrates. The research aims to control and predict solder joint reliability in this system and to understand the how joint miniaturisation affects microstructure formation and stability. This project involves controlled solidification experiments, reflow soldering and analytical electron microscopy.

Lead-free solders, which have been developed to substitute lead based alloys, suffer greatly from anisotropy compared to the original tin-lead alloys due to the tetragonal crystal structure of the majority component, βSn. Additionally βSn suffers from nucleating difficulties usually leading to a single nucleation event which results in a single βSn grain, cyclic-twinned βSn grains, and/or interlaced-twinned βSn grain morphology. This nucleation-difficulty phenomena is seen clearly when repeatedly melting and solidifying Sn-based alloys and measuring the nucleation undercooling. The stochastic value of the nucleation undercooling can vary (depending on sample purity and size) from 45K to 80K, this is in stark comparison to the melting which is seen to always happen at a fixed repeatable value. Nucleation kinetics will be studied in lead-free solders, with and without soldering substrates, in order to understand fundamental nucleation laws with experimental data, as well as the implication of nucleation onset on the resulting microstructure. By understanding the nucleation phenomena of βSn in lead free solders we seek to control the microstructure sufficiently to alter the mechanical, and electrical properties of solder joints to improve reliability of electrical devices. Finally, the gained knowledge of nucleation in the studied system will be generalised and extended to any system.

Mg alloys are attractive for the fields of transport and aerospace due to their high strength to weight ratio. However, corrosion issues, especially micro-galvanic corrosion, have been significantly restricting their commercial applications. Although some high corrosion-resistant Mg alloys, like AZ91E, have been developed in industry, there is still a lack of understandings of the underlying mechanisms. Previous studies proved that intermetallic compounds within the Mg matrix play an important role in terms of interior micro-galvanic corrosion. Therefore, this project aims to build up the understanding of how these compounds are affected by alloy composition and processing steps, with an ultimate goal to find out how to control phase selection and manipulate intermetallic morphologies for improved corrosion resistance.

Description: Ag3Sn crystals are important in the performance of Ag-containing Pb-free solders. The size, shape and volume fraction of Ag3Sn crystals in forms of primary and eutectic influence the reliability of joints.  This project focuses on characterising the crystal growth of primary Ag3Sn crystals during solidification and quantifying the coarsening mechanisms of eutectic Ag3Sn particles during isothermal ageing and thermomechanical cycling. The interplay between Ag3Sn crystals and beta-Sn dendrite arms during solidification is also studied by controlling the nucleation undercooling of beta-Sn. The project uses analytical electron microscopy combined with real-time synchrotron radiography to reveal Ag3Sn crystal growth characteristics and develops automated image analysis algorithms to quantify the Ag3Sn particle ripening and coalescing kinetics. 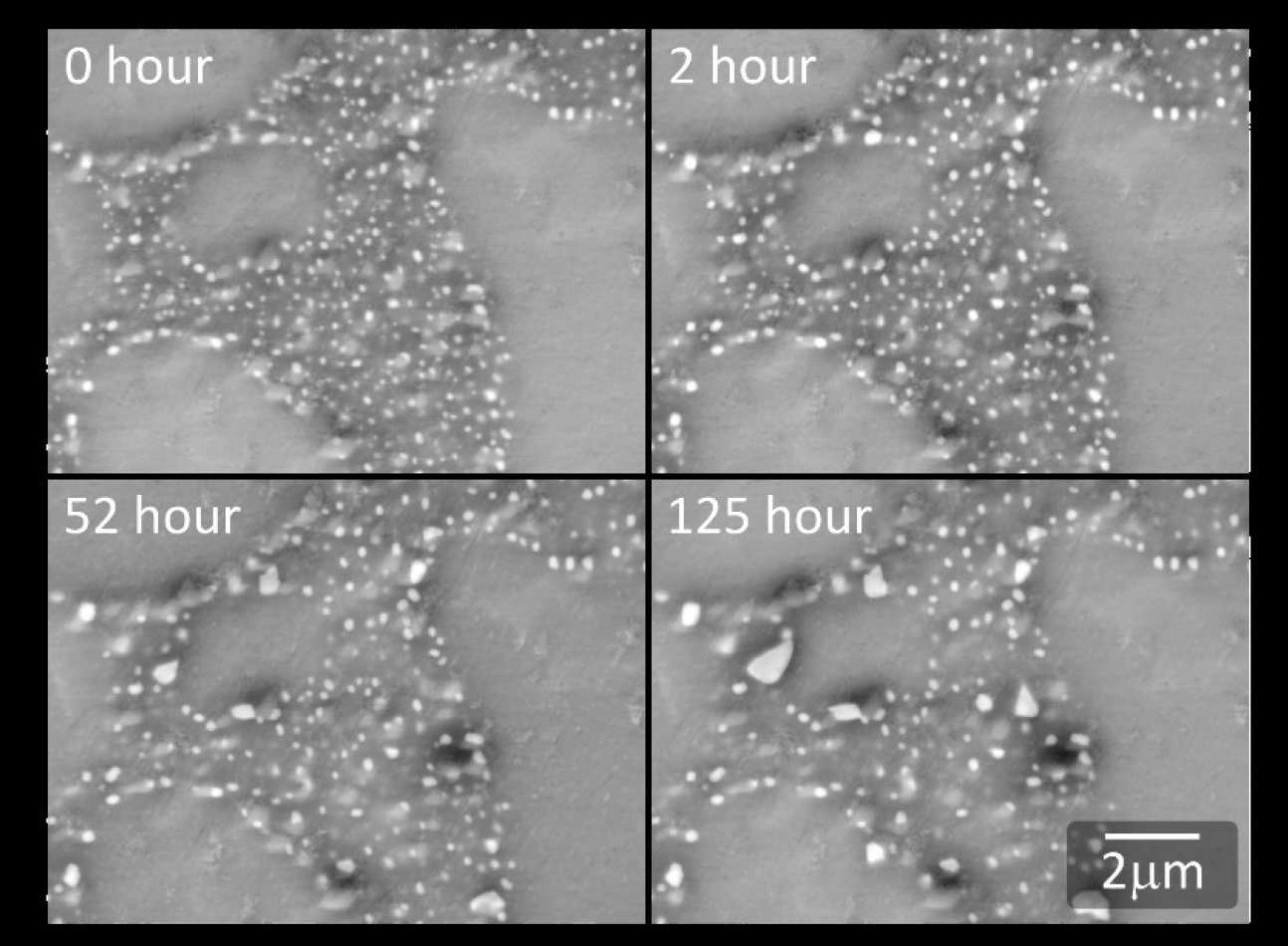 New approaches to the grain refinement of Mg-Al based alloys

Abstract: Grain refinement is vital for enhancing magnesium alloys in terms of castability, formability, strength and ductility. The four main known methods of grain refining Mg-Al based alloys are superheating, the Elfinal process, native grain refinement and carbon inoculation, but these refining processes have not found widespread industrial use. Part of the reason for this is that the mechanisms of grain refinement in these methods is not fully understood. For instance, in the carbon inoculation method, the active Nucleant has been reported as Al4C3, Al2Mg2C2 and Al2CO, but this has not been confirmed. In this study, analytical electron microscopy approaches are being used to identify nucleants and investigate orientation relationships with the Mg-matrix. This new understanding is then being applied to develop an improved grain refiner for Mg-Al based alloys.

In the Mg industry, liquid Mg-Al alloys are commonly melted, ladled and/or poured from steel containers because the ceramics used by the Al industry would react with liquid Mg and because there is a low solubility for Fe in liquid Mg. However, Fe reacts with the Al and Mn in AZ91 when the molten alloy is held above the liquidus temperature, e.g. for many hours before handling in high pressure die casting (HPDC). This can lead to the formation of Al-Mn-(Fe) intermetallic particles that build up as die-casting sludge, block filters in DC casting, and affect the corrosion performance of Mg components. In this study, electron backscatter diffraction (EBSD) and energy dispersive X-ray spectrometry (EDX) are utilized to understand the nucleation and growth mechanisms of Al-Mn-(Fe) intermetallics in liquid AZ91 in contact with mild steel, at a range of temperatures and holding times. The quantitative results are used to discuss (i) the build-up of die-casting sludge and methods to minimize this and (ii) the impurity pick-up from the steel crucibles.

Solders have always played a critical role in electronic engineering as they link different parts together and carry signal and power between them. However, our understanding on the relationship between reliability and the microstructure of the solder joints is limited. In this project, the effect of β-Sn nucleation undercooling, β-Sn grain orientation and secondary Ag3Sn particle size on the fatigue life of SAC305 solder joints under isothermal shear cycling and thermal cycling is studied. A Nordson DAGE bondtester is used to perform isothermal shear cycling tests. Characterization methods including optical microscopy, scanning electron microscopy and electron backscatter diffraction analysis are used to obtain microstructural information. Once the relationship between the solder joints’ microstructures and their fatigue performance is well-understood, it becomes possible to optimise the reliability of solder joints by controlling their microstructures.

New magnesium alloys such as Mg-4Al-4RE (wt%, RE = rare earth) have better elevated temperature creep resistance and competitive room temperature properties when compared with current magnesium alloys (AM series and AZ series). HPDC (High pressure die casting) is widely used in the magnesium industry because it allows thin walled and complex shaped components to be mass-produced economically, as well as providing a good surface finish and finer microstructure than other casting routes. However, the rapid and complicated multi-phase solidification process in magnesium HPDC results in casting defects such as porosity and cold flakes that degrade mechanical properties. This project investigates alloy – processing – microstructure – properties relationships in Mg alloys and aims to improve properties through controlling microstructure and defects.

In the casting of Al alloys, Al-Ti-B master alloys have been commonly used as grain refiners. A large number of studies have focused on the α-Al grain refinement effect of this master alloy and it was found that the two compounds, Al3Ti and TiB2, are mainly responsible for the nucleation of α-Al matrix. The detailed nucleation mechanism in this alloy system is still a controversial question and one of the widely accepted explanations suggests that the TiB2 is a highly potent substrate for Al3Ti to nucleate, promoting the subsequent nucleation of the Al matrix on Al3Ti. In this study, by investigating the location, growth morphology and orientation relationship between Al3Ti and TiB2, we aim to gain a better understanding on the nucleation and growth mechanism of Al3Ti.