Over the past 5 years we have worked to develop our relationship with Imperial into one of our top strategic partnerships with an academic institution. The current portfolio demonstrates the depth and breadth of work that can be achieved when two partners perform so well together."

We were thrilled to be awarded the prize.  One year on, we thought it was the perfect opportunity to look back at the evolution of the partnership.

The signing of a Master Collaboration Agreement in 2013 aided co-ordination of the growing portfolio by negotiating key commercial terms.  This paved the way to focus on producing award-winning joint research.

The research projects cut through P&G's business interests; from consumer product research into silkier hair to leveraging the leadership expertise of Imperial's Business School to empower P&G's R&D scientists and managers.  Below we have compiled a few highlights. 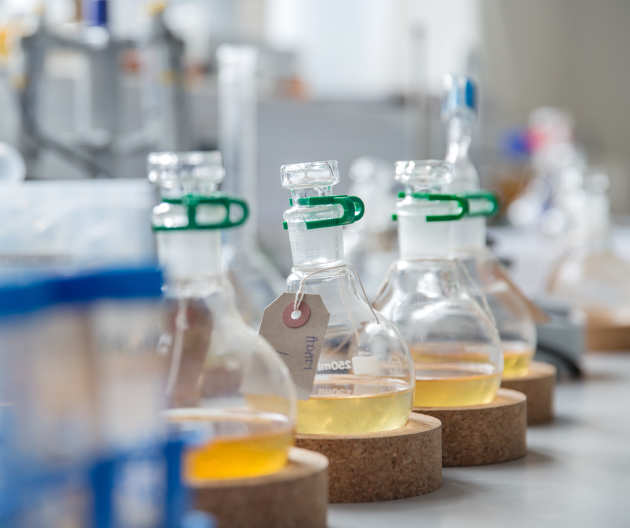 Dr Joao Cabral, a Reader in Soft Matter from the Department of Chemical Engineering, has been involved in a number of P&G projects over the past 5 years.

Imperial is one of the leading centres in the world focussing on soft matter studies of liquid product stability and so forms the perfect partner to help improve P&G's household product ranges.  Amongst other projects, Dr Cabral has been looking after a cluster of 4 co-funded studentships and a postdoctoral associate.  Together they have focussed on understanding the behaviour of surfactants (in this context detergents, soaps and foaming agents) at low temperatures.

This research has big implications for preserving P&G's product integrity as it could be used to reduce the effect of temperature shocks experienced by products during transport and storage.

Several other academics are recurrent features in the P&G portfolio; a testament to the strong relationships that have been constructed during the partnership's growth.

Both Imperial and P&G recognise that a key success factor in collaboration is the development of strong interactions amongst individual project partners in the two organisations, aimed towards mutual success."

As time has progressed and relationships have become more established, projects have become more complicated.  The MEMPHIS project, a 5-year £5M EPSRC programme concentrating on the modelling of multiphase flows, is one such example.  Led by Professor Omar Matar for Imperial, the project involved 33 postdocs and 12 PhD students and the Universities of Birmingham, Nottingham and University College London.  P&G acted as the project's industrial sponsor.

The project's highly innovative nature also yielded high levels of exposure.  Over 100 papers and presentations at international conferences had been delivered as it ended in 2017.

The team are looking forward to commercialising the project outcomes to enable P&G engineers to run increasingly complex and difficult models.  This will drive innovation in the infrastructural elements of P&G, such as large-scale industrial processes and equipment design.

In addition, the Imperial-P&G partnership has included MRes projects with students from the Institute of Molecular Sciences (IMSE) and multiple Knowledge Exchange Secondments (KTS) for more experienced academics.  Both have facilitated the flow of knowledge between business and academic environments.

Today, more than 30 people are engaged in maintaining the Imperial-P&G relationship at all levels.  Activities are overseen by a joint steering group with representatives from Imperial and P&G, which meets at least once a year.

Relationship management and coordination on Imperial's side is undertaken by the Corporate Partnerships team, which manages the College's strategic corporate relationships.

"Both Imperial and P&G recognise that a key success factor in collaboration is the development of strong interactions amongst individual project partners in the two organisations, aimed towards mutual success," said Professor Alan Armstrong, Imperial Project Sponsor and Head of the Department of Chemistry at Imperial.

"These close working relationships are the backbone from which we can deliver Imperial's strategy to achieve impact externally and strengthen collaboration with businesses such as P&G."

Imperial and P&G's relationship is steadily growing stronger, becoming more strategic and complex.  Remaining at the heart of every project, however, is innovative science with the potential to make a critical impact.

"Over the past 5 years we have worked to develop our relationship with Imperial into one of our top strategic partnerships with an academic institution.  The current portfolio demonstrates the depth and breadth of work that can be achieved when two partners perform so well together," said Dr David Jakubovic, P&G Project Sponsor and Director of Open Innovation EMEA for P&G.

"Imperial's reputation for innovation, academic thought leadership and world-class research has helped us to reach key breakthroughs.  It has allowed us to continue delivering market leading products and services to our customers."

For more information or to discuss partnering with Imperial please contact Dr Fiona Jamieson, Corporate Partnerships Associate for the Faculty of Natural Sciences.