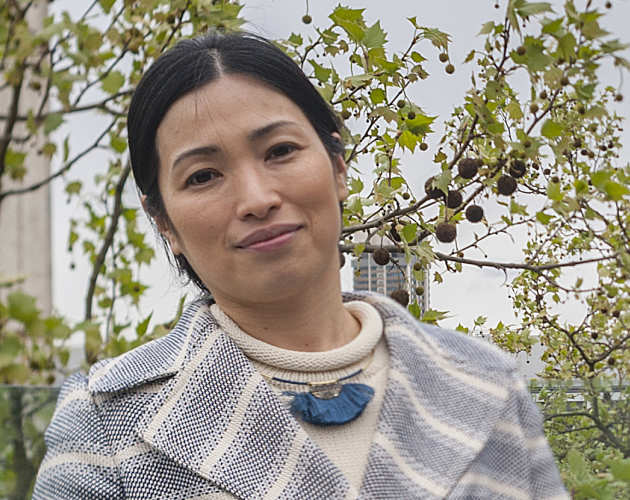 Cyanobacteria are single-cell bacteria that can live in water and on land, and like plants use photosynthesis to convert light into chemical energy. About 2.4 billion years old, these microorganisms are believed to be responsible for the Earth’s oxygen-rich atmosphere.

During photosynthesis, molecules of water are split into oxygen, protons and electrons. As well as generating electrons in the light, cyanobacteria can continue to generate electrons in the dark using reserves from earlier light reactions. This is because the cells have a built-in energy store, like a battery.

However, this form of green energy is so far limited to the laboratory because power outputs are relatively low. One obstacle to scaling up this technology is the lack of a well-designed device to contain the microbes and harvest the energy they produce.

Dr Sawa continues: “This is usually done with cyanobacterial or algal cells in liquid solution within a three-dimensional electrochemical container. I wanted to try a new approach – to get rid of the water volume that resulted in the heavy container and experiment instead with a dry system on a solid support.”

“I found I could create a very concentrated solution of cyanobacteria, like an ink, and print the cyanobacteria onto a sheet of paper using an ordinary printer. The most important revelation was that the printed cells on paper could grow and photosynthesise with the same efficiency as they would in water.”

This unusual approach is a reflection of Dr Sawa’s unconventional background. She gained her PhD through a collaboration between Imperial and Central Saint Martins, University of the Arts London, with a focus on using design in biotechnology.

Using her ‘bioink’ and computer-aided design, Dr Sawa was able to control how the algae and cyanobacteria were deposited on the paper. And by combining this technique with electronic circuitry also printed onto the paper with conductive carbon nanotubes, Dr Sawa and her colleagues created a first of its kind ‘biophotovoltaic paper’.

“The advantage is that it doesn’t involve steel or heavy metals in production, or non-degradable plastic. Because it’s made of plants and bacteria printed on paper it’s greener, more carbon neutral. When we need to get rid of it, it can biodegrade in the garden.”

The bioink can be printed in precise and beautiful patterns and can produce enough energy to power a small device such as a digital clock or an LED bulb.

Dr Sawa applied for the Techcelerate programme because she wanted to explore the potential for producing electricity using her paper-based bioreactor. “Techcelerate was great because took me out of lab. For a few months, I wasn’t working on the technical side, so I was able to work on the commercial side.”

Because biological energy technologies never really reached the market, Dr Sawa had something of a challenge in finding potential clients. “I talked to wide range of people in research and in industry. For example, researchers in environmental monitoring – people who measure air quality or soil toxicity, those who use biosensors for water pollution. No one uses this kind of technology at the moment, so I also talked to innovation leaders in industry – heads of innovation at Anglian Water and other water companies.

“We had some interest from an urban farm just setting up in Florida who were looking for different types of renewable electricity system. They liked ours because they thought it was prettier than traditional solar panels and more eco-friendly because it’s mostly made of organic materials.”

Halfway through the programme, Dr Sawa made a major breakthrough when she secured £30k of in-kind support from Arm, the Cambridge-based technology company that makes 95 per cent of microprocessors for smartphones.

“Arm is the world’s largest provider of microprocessor intellectual property – it’s a big deal! We’re partnering with their Research department in Cambridge to demonstrate if a solar bio-battery can power an ultra-low energy microprocessor. These could be used to drive future ‘internet of things’ products, or in new medical implants, which are currently being developed to treat diseases by regulating electrical pulses between nerves and organs.”

This in turn has led to a further £100k in funding from the UK Engineering and Physical Sciences Research Council to develop the ‘solar bio-battery’. Dr Sawa continues to work on the technology, seeking patents for her new developments, while also working to raise public awareness about biotechnology.

She adds: “Techcelerate is a really great programme because it helps you develop an understanding of how a business is created. Terms like ‘patent’ and ‘spin-off’ can seem very abstract and vague. Now I’ve had first-hand experience, as well as the opportunity to talk to people in different industries and explore who would be interested in our technology.”