This year I graduated from the University of East Anglia with an integrated Master's degree in Natural Sciences. I began specialising in biology but very quickly moved over to applied mathematics and more specifically, fluid dynamics. I have done research investigating instabilities representing mixing near the stomach wall, and, following the work of Crowdy et al. (2011), I investigated the use of complex analysis to model a low Reynolds number swimmer beneath a free surface. I would like to continue to model biological flows, however some of these situations will have high Reynolds number - which I have not really worked with. I chose this program to investigate different flow situations to give me a wider background knowledge to work with, and also to help me to decide where to specialise in the future. 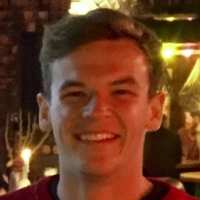 For my undergraduate degree I studied Mathematics & Physics at the University of York. My dissertation was on hydrodynamic stability theory, and in particular deriving and applying criteria for instability in cases involving velocity shear, thermal convection, and rotation. Following this I worked for a while at Applied Intelligence - the technology consulting arm of BAE Systems.

My degree gave me a lot of exposure to fluid mechanics and many of its sub-disciplines, but I wasn't too sure in which area I wanted to specialise, and so the diverse and interdisciplinary nature of the CDT appealed to my indecisiveness. After spending time outside of academia too, I knew the MRes year would be a great re-introduction to a lot of the concepts that I'd learnt and forgotten. 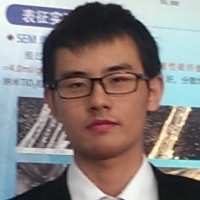 Before joining this CDT, I completed my BEng in Thermal Energy and Power Engineering at Harbin Institute of Technology in China. During the last four years, I learned a lot about fluid dynamics, especially the flows in the steam turbine and the gas turbine, and I finished my graduation thesis with respect to the simulation of the turbulence and transition on the low-pressure turbine blade of the gas turbine.

Following my interest in fluid dynamics, I came to Imperial College London with the hope of acquiring broader and deeper knowledge of this subject. The core courses of this CDT programme which involve theoretical, computational and experimental expertise in fluid dynamics are quite suitable for students, such as myself, who want to obtain a comprehensive understanding of this topic. What is more interesting is that the programme is actually an interdisciplinary one. So your fellows and lecturers may come from different backgrounds and they may think of a problem from different perspectives, which is helpful to your self-improvement. A real example is that one of my fellows from mathematics once taught us a new method, which I had never heard of, to solve a differential equation in class.

I am of German-Malaysian heritage, and have lived in Germany, Malaysia and Hong Kong throughout my youth. Since 2010, I have been at Imperial College London where I recently completed my MEng in mechanical engineering.

Within a few months of starting my studies, I was relatively certain that I would like to specialize in fluid mechanics. I am simply fascinated by the fluid dynamic phenomena that surround us and how relevant the field is to many industries. I particularly enjoy looking out for the shadowgraph of shockwaves on an airplane wing’s suction surface, as well as comparing the dominant form of drag acting on runners and swimmers to that acting on cars and aircraft, respectively.

At university, all my major projects were in fluid mechanics. The most noteworthy were the development and testing of an engine exhaust pulse replicator for turbocharger performance evaluation, and a theoretical project on the magnetic control of shock-turbulence interactions in a plasma with application for spacecraft re-entry. To experience fluid dynamics in industry, I also completed a year long placement as an aerodynamics performance engineer at the Red Bull Racing Formula 1 team. There, I was exposed to aerodynamic development in top-level motorsport and, amongst other things, improved the correlation between wind simulated in their vehicle simulator and on-track wind.

Applying to the CDT in Fluid Dynamics across Scales was the most logical next step. The program exposes students to fluid mechanics across seven faculties and provides the opportunity to complete a further Master’s project before choosing a PhD topic. 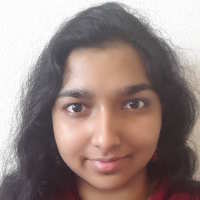 I've been a student in Imperial's Mathematics department for the last four years, and I chose to stay on for four more thanks to the CDT. I first heard about the CDT by word of mouth, and decided to apply for it because of a few simple reasons: The CDT allows me to continue broadening and deepening my understanding of fluid dynamics, it gives me an opportunity to see the experimental aspects of fluid dynamics, it provides classes for refining various computational skills, and it gives me a firm foundation for a PhD to continue researching low Reynolds number fluid dynamics.

I am Polish and I did my BA (Maths) and MMath (Applied Maths) in Peterhouse, Cambridge.

I joined the CDT mainly to learn proper CFD and scientific computing/modelling which I hope are going to play a significant role in my PhD - four years of mostly pen-and-paper maths were great but I do not want to stop there (can you tell that I am not a pure mathematician?).

Topics in fluids I have enjoyed the most so far include stability theory, creeping flows (with applications to microorganisms), climate dynamics, asymptotics and perturbation theory - hopefully there will be much more coming this year! 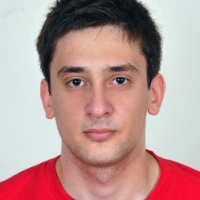 Before I joined the CDT, I received a Diploma degree (Dipl.-Ing.) in Mechanical Engineering from the Aristotle University of Thessaloniki, Greece. During my senior year, I moved to EPFL in Switzerland to conduct experiments in flow dynamics and heat transfer. My undergraduate studies and the hands-on experience that I acquired at EPFL sparked my interest in academic research.

The CDT appealed to me because of the diverse nature of its 1st-year programme, which allows students to get a fairly broad specialisation in the area of flow dynamics, while also laying the foundations for the research project in years 2 to 4. 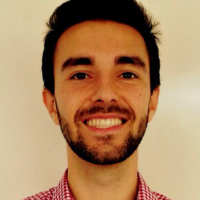 I am Sergio and I am originally from Madrid, in Spain. There I studied Aerospace Engineering at the Technical University of Madrid, and Mathematics at the National Distance Education University. Since 2015 I have been working at the Department of Mathematics of Imperial College, under the supervision of Professor José Carrillo and Dr. Young-Pil Choi, thanks to an UROP and an Erasmus stay. Our project deals with numerical methods for collective behaviour systems, and has been recognized with the UROP prize for the best project of the Department of Mathematics in 2015. Our main results are published in a book chapter of Springer.

My interests are focused on the numerical simulation of engineering problems that involve an intense use of Applied Mathematics. The CDT in Fluid Dynamics across Scales offers an appealing program that attracted my attention due to the different applications and approaches to study fluids.

During the last years I have taken part in scientific and entrepreneurial programs at University of Oxford, Tsinghua University, InDeWaG (Horizon 2020), Beihang University or Aernnova. I am a founder member of the social startup UrbanBees, focused on reducing air pollution in cities with drones. In my free time I enjoy learning foreign languages, specially Chinese and French.

You can know more about me in my website: www.sergioperezresearch.wordpress.com 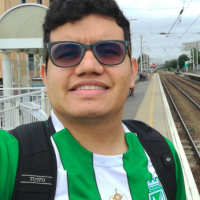 I studied my BEng in Mechanical Engineering at Universidad Nacional de Colombia, in Bogotá, Colombia (South America). At my home university, I had the opportunity to do some research related to the numerical simulation of the flow field inside the combustion chamber of a spark ignition combustion engine. After this experience, I was convinced I wanted to continue my studies in the field Fluid Mechanics. I was attracted to this CDT due to its interdisciplinary approach to Fluid Dynamics, and the high quality of the research facilities and Faculty at Imperial. 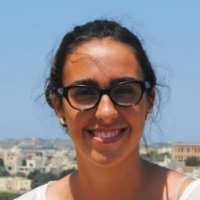 I come from a small town in Spain, San Sebastian, where I studied my undergraduate degree in Mechanical Engineering at Universidad de Navarra. As part of my degree, I took several Fluid Mechanics courses which encouraged me to do my final project in CFD simulations of a wing. After this, my interest in Fluid Dynamics only grew so I decided to extend my studies with this MRes. 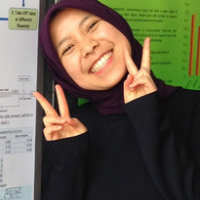 Hi! My name is Nindya and I'm originally from Indonesia. Prior to the CDT program, I completed my MEng degree in Chemical Engineering at the University of Manchester. I find fluid dynamics to be an interesting topic based on the modules that I took during my undergraduate and that it is very applicable to a wide range of industries where there are mixing and multiphase flow processes. However, I didn’t get much exposure to the subject hence I decided to join this CDT program, in addition to wanting to specialise in the area. Also, there’s the opportunity to learn about simulation (i.e CFD) which I think would be a valuable skill to have in the future. So far, I’ve been enjoying the programs!

I decided to stay on at Imperial College after completing an MSci in Physics here. I did my master’s project in Switzerland at CERN, and whilst this was an amazing experience, I realised that particle physics wasn’t quite my calling. What I did realise is that I really liked research, the computational aspect of my work and that I wanted to work with something more widely applicable and physically intuitive. That’s how I ended up at the CDT. I was particularly attracted by the diverse nature of the CDT since I wanted the opportunity to develop my skills in a variety of subjects. 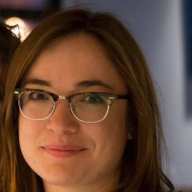 Hi I'm Carolanne, I come from Nice in France. Before joining the CDT I did a MEng in Aeronautical Engineering in Imperial College London and spent my third year in Centrale Lyon. My final year project involved looking at the effects of distributed propulsion on a hybrid aircraft.
After studying fluids applied to aeronautics in my undergraduate, I decided to join the CDT to discover what else fluid dynamics has to offer. 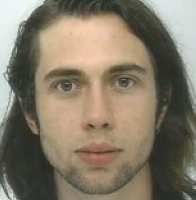 Before starting the CDT, I had previously completed an MSci degree from the University of Birmingham, in Mathematics. My project involved developing a mathematical model for a new form of wave energy device. One of the reasons I joined this Fluids CDT was due to the multidisciplinary approach, and the skills and insight I hope to gain because of this. 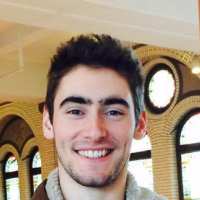 I'm originally from Canterbury, England and my undergraduate degree at the University of Nottingham began as a Physics and Philosophy joint honours, though after my second year I transferred to the Physics with Theoretical Physics course. I studied  for four years in Nottingham and as part of my MSci year, I traveled to the Observatorio Nacional in Rio de Janeiro to assist in analysing x-ray spectra from distant galaxy groups. After graduating from Nottingham, I then obtained a Master's in Elementary Particle Physics and Cosmology from UAM in Madrid before coming to Imperial to participate in the Fluid Dynamics CDT.

My research interests encompass the more theoretical and mathematical aspects of fluid dynamics, and those with a strong tie to physics especially pique my curiosity: the simulation and statistics of turbulent flows, cosmological fluid behaviour, non-Newtonian fluids, quantum fluids, and magnetohydrodynamics to name a few.