In recent years, the development of offshore wind farms has become a major focus in energy industry, particularly in areas of the world with high seismicity like South-East Asia. While large-scale wind farms are considered a reliable and renewable alternative to conventional energy sources in future, there is at present no established design practice for the foundations of offshore wind turbines in seismic areas.

Current design codes for offshore foundations are based on experience from numerous wind farm projects in the North Sea, where seismicity is very low. Thus, important phenomena such as soil liquefaction due to earthquake excitation as well as the interaction of wind-, wave- and earthquake loads on the pile are not included in these provisions. The available tools for liquefaction assessment of soil during an earthquake are empirical. These are based on on-shore surface manifestations of historic liquefaction events and empirical correlations with field measurements of soil properties, which are only valid for shallow depths (Idriss and Boulanger, 2008). Simplified one-dimensional models of piles with lateral springs are most commonly adopted in design, where the stiffness of the springs is reduced in soil layers where liquefaction occurs (Lombardi et al., 2017). Due to the vast simplifications and limitations of this current design-procedure, it is crucial to understand better the pile behaviour in a three-dimensional boundary value problem. This research project therefore aims to provide a better insight into the behaviour of offshore piles through numerical finite element analyses.

The constitutive model adopted in these analyses is a modification of the bounding surface plasticity model by Manzari and Dafalias (1997), which is able to reproduce the most important features of sand behaviour such as phase transformation, strain softening and liquefaction. The version used in this project incorporates changes to the original model formulation introduced by Papadimitriou and Bouckovalas(2002), Taborda (2011) and Tsaparli (2017). Through the use of an empirical parameter representing the evolution of soil fabric, the development of plastic strains under cyclic loading can be controlled (Papadimitriou and Bouckovalas, 2002). Flexibility is granted in the calibration process for a large range of void ratios and initial confining pressures by redefining the shape of the critical state line and the hardening modulus (Taborda, 2011). A secondary yield surface for low effective stresses reduces the computational costs and improves the accuracy when modelling liquefaction. The model performance has been further improved for cyclic loading under various stress levels by altering the formulation of the flow rule (Tsaparli, 2017).

These recent modifications of the bounding surface plasticity model enable an accurate representation of laboratory element tests and provide credible results in one-dimensional site response analyses (Taborda, 2011; Tsaparli et al., 2016; Tsaparli, 2017). Building up on this work, the application of the model is to be expanded to more advanced two- and three-dimensional problems. The main goal is to model accurately the response of soil and the offshore pile for complex load cases, realistic non-uniform soil profiles, large depths and different earthquake excitations. 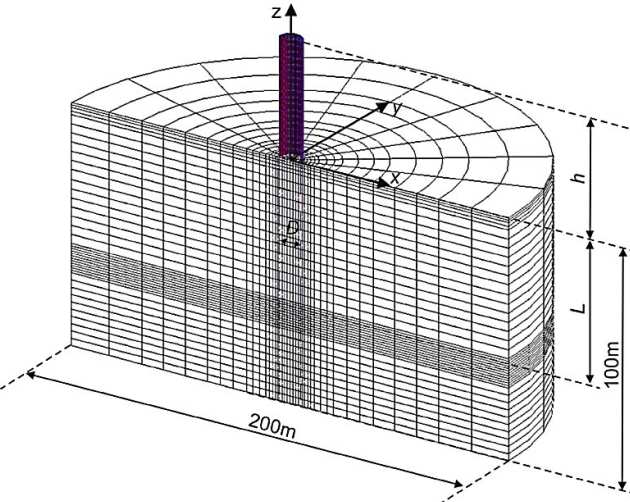 This research project aims to apply and further develop the numerical tools implemented in the Imperial College Finite Element Program ICFEP (Potts and Zdravković, 1999) to assess the liquefaction susceptibility of sands and to model the soil-structure interaction in various load cases under earthquake excitation for deep offshore piles. The main objectives are: