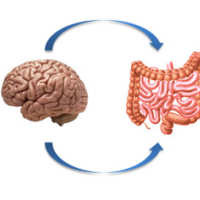 The actions of the gut microbiota are not confined to the gut and the liver, to which the blood from the gut drains and is processed.  There is a body of work building which shows that the gut microbiota can play a role as a driver of behaviour, stress response and some brain diseases, such as dementia.  While many examples exist of pathogens which can alter the host behaviour, for example Toxoplasma gondii reduces predator fear in its host, there is also interesting work showing that the gut commensal microbes can play a role in neurological development and behaviour too.  This communication with the brain can be via the vagus nerve or via neuroactive metabolites, such as gamma aminobutyric acid (GABA) made by the gut bacteria.

The recent increase in autism has focused researcher’s attention to turn to environmental factors, which may be driving the increases in reported cases of autism.  A significant reason for looking at the gut microbiota as a factor in this disease, is that host’s genetics are not changing fast enough to explain the increase in autism.  However, we hypothesize that the recent introduction of antibiotics and dietary changes are changing the composition of the gut microbiota and this results in overproduction of microbial metabolites which are responsible for behavioural changes.

The role of the gut microbiota on how the mind functions is a key research theme within the centre and we are exploring how this facet of superorganism biology can play a role in influencing stress, satiety and obesity, autism, cognitive development and depression.