A passion for science from an early age 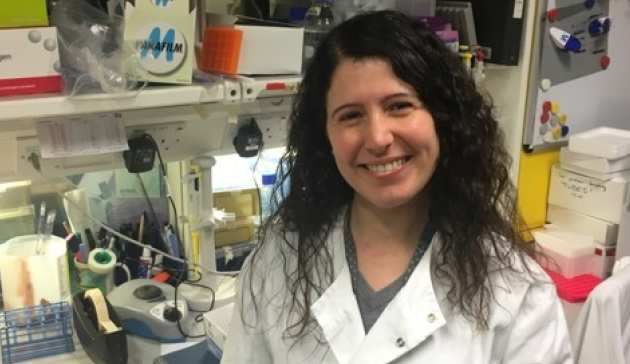 Dr Biancastella Cereser is a Research Associate in our Department of Surgery and Cancer where she is researching the link between breast cancer and the age of pregnancy.

Breast cancer is amongst the most commonly diagnosed cancers in the world and yet the effect of age of pregnancy on breast cancer occurrence is still not well studied.

Biancastella is part of a team that is helping to understand how the normal breast modifies during the reproductive years, with a view to enabling better prevention strategies, such as monitoring programmes which could be implemented in clinical settings.

She reflects on her career so far, which began with a very early interest in science, inspired by very engaging teachers at school.

"STEM gives you lots of transferable skills for other things as well – you don't have to go into research.

A degree like maths opens up so many pathways and is fundamental to many industries."

Where did your interest in science start?

It started fairly early on as a result of inspirational science teachers in both primary school and secondary school.

They really prioritised making science engaging and fun rather than just speaking at the front of class. That really helped to spark my interest in science, which I continued through to university.

I'm Italian so I remained in my home country initially. It was during the course of my BSc in Molecular Biology at Padua University that I first became interested in breast cancer, working in the group of Professor Antonino Carbone and Dr Annunziata Gloghini in the National Cancer Institute Aviano, Italy.

From there, I went on to complete an MSc in Molecular Biology, which also allowed me to work for one year in the Department of Microbiology, Tumor and Cell Biology (MTC) in the Karolinska Institute in Sweden, where I studied genetic instability in cancer cells.

I then moved to Queen Mary University of London to complete my PhD, investigating the non-canonical functions of telomerase, an important protein involved in many types of cancers, in keratinocytes.

What are you working on at Imperial?

I joined Imperial in 2016 as a research associate in Professor Justin Stebbing's research group, which is interested in different aspects of cancer, in particular the genetic and epigenetic changes underlying breast and colon cancer.

I'm really fortunate as the head of our research group has given me a lot of freedom in my research which is unusual for a post-doc position.

I decided to work on a project observing the risk of developing breast cancer and how it was linked to the age of pregnancy.

I manage a small team, analysing lots of breast tissue samples from healthy women and observing DNA changes to try and see how the normal breast changes during pregnancy and whether these changes are different between older and younger women.

It is, in fact, known that having a child at a younger age (below 24) means that you have a lesser risk of developing breast cancer compared to someone who has children later, but the biological mechanisms for this are still unknown.

Breast cancer is currently one of the most commonly diagnosed cancers in the world. What impact do you think your research will have in the future?

I hope that my research will contribute the future development of a test to determine the risk of developing breast cancer.

What's special about my current work is that it's such an innovative project as it looks at healthy women rather than those who have the disease. The tissue bank in the USA where we obtain our samples is the only one in the world which keeps samples of breast tissue from healthy women.

It's exciting that more and more researchers are trying to approach these challenges from a different point of view e.g. analysing healthy rather than diseased samples or creating 3D models of cell linings.

Technological developments make this more possible and the speed at which technology advances means that every day you learn something new.

My work is particularly rewarding because breast cancer is such a real and relatable issue which means that I really feel like I could make a big difference.

How do you find being a woman in STEM, particularly at Imperial?

Imperial is a good place to be for a woman, particularly in Medicine and Biological Science where it's the case in most institutions that there are more women than in Physics, for example.

More and more young women are choosing to study STEM and get into research, but not many are becoming scientists in senior positions. There are not too many visible senior women in science.

My department at Imperial is doing some work to see why this is by creating a career survey to analyse why female post-docs do not move on to senior research positions in universities. I see it as a challenge that there are not many senior women in STEM and that gives me more motivation to continue to progress.

Do you have any advice for women looking to follow in your footsteps?

My advice would be to never give up!

It can be difficult to secure a long-term job in science but don't give up hope because there is no better career if you really enjoy STEM and you will get somewhere if you continue to try.

STEM gives you lots of transferable skills for other things as well – you don't have to go into research.

A degree like maths opens up so many pathways and is fundamental to many industries.