A ray of sunshine 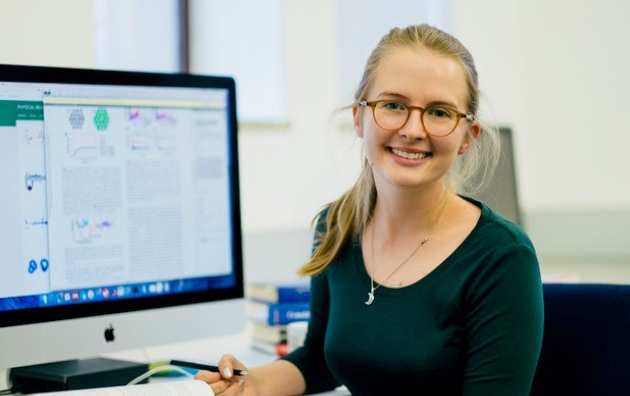 Samatha Hood is a Research Assistant in Photovoltaic Materials Modelling in the Department of Materials.

Having moved from her homeland of Australia in 2018, Sam is working on next generation photovoltaics, which combines her love of maths and science with a passion for contributing to the sustainability of the world around us.

"When I was at school, I really enjoyed maths. I have also been passionate about the environment since I can remember, so I wanted to combine my maths skills and my passion for the environment in my career."

What inspired your decision to study a STEM subject at university?

When I was at school, I really enjoyed maths.

In particular, I wanted to design better sources of renewable energy to help our fight against climate change. So I studied an undergraduate degree in Maths and Physics (which then lead to a PhD in Physics), which was a great foundation for solar technology research.

What brought you to Imperial?

When I came to give a seminar at Imperial in 2017, I walked into a lecture theatre in the Chemistry building and thought I was in the wrong place because there were so many women in the room.

It really stunned me that more than half of the attendees were women, and I really wanted to be a part of that community and learn how Imperial works to improve diversity in an academic setting.

I eventually joined the College in April 2018 as a researcher in the Materials Design Group in the Department of Materials.

The group itself is what influenced me most to choose Imperial, because they (now we!) do cutting-edge research in developing sustainable materials for energy applications.

It also helps that the group are super welcoming and fun to work with!

How are you finding being a woman at Imperial?

I have not been disappointed by my initial impressions – I have made so many wonderful connections with inspiring women geniuses in the College.

I’m also really impressed by the equality and diversity work that goes on here.

What are your plans for your next career steps?

In a few years, I’d like to return to my homeland of Australia to apply what I have learned at Imperial to creating my own research group.

Australia is one of the sunniest places in the world, so encouraging people to move away from coal and towards renewables would be really impactful — both economically and environmentally.

Read more about Sam's career so far on her website.