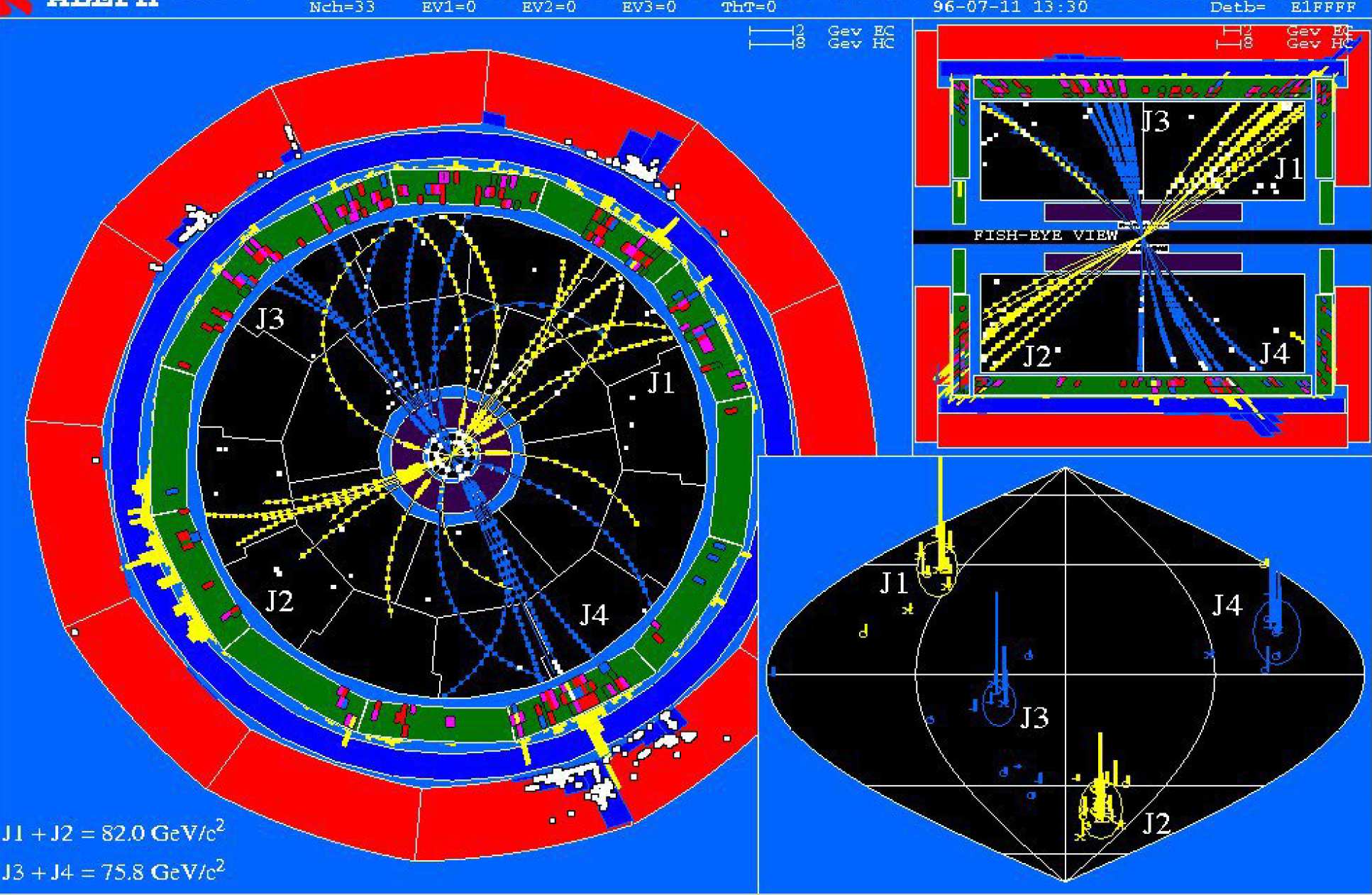 The ALEPH experiment started in 1980. The first years were occupied with the design and construction of the experiment, which took place while the Large Electron Positron (LEP) collider was being built at CERN. The group here was responsible for designing and constructing the Inner Tracking Chamber (ITC) and also all the associated readout electronics, and online and offline software. LEP came online in 1989, and that is when the first ALEPH data were taken. LEP ran until the year 2000 when it was shutdown in order to make way for the Large Hadron Collider (LHC) which was built in the same tunnel as LEP at CERN. The ALEPH collaboration has now completed all its major analyses and is essentially at an end.

The data taken at LEP allowed precision tests of the electro-weak Standard Model (SM) to be undertaken. The group here concentrated our analysis efforts mainly in Heavy Flavour (beauty and charm) physics, in searches for the the Higgs boson, the particles postulated to generate particle mass, and for physics beyond the SM, e.g. Supersymmetry, and in W physics.

The ALEPH data included the first candidates of the Higgs boson. The Higgs analysis was completed early in 2002 and the final publication produced.  Our final project on ALEPH was to complete an accurate measurement of the W boson mass, an important ingredient for verifying the Standard Model and for predicting the mass of the Higgs boson.

Further information on ALEPH and CERN is available at the following links.

The following sections describe the final main areas of ALEPH analysis pursued by the group.

During the last year of data taking at LEP, ALEPH collected 217 pb-1 of data, at collision energies up to 209 GeV. Shortly after the closing down of the machine in December 2000, ALEPH published its preliminary results on the search for the Standard Model (SM) Higgs boson. An excess of events was found in the search, consistent with a possible SM Higgs boson signal with mass ~115 GeV/c2. The compatibility of this observation with the background-only scenario had a probability of a few per mil (~3 sigma level). The excess was mostly due to three high-purity events selected in the four-jet channel, e+e- → hZ → bbqq. In December 2001 ALEPH published the final paper entitled "Final results of the ALEPH Searches for neutral Higgs Bosons" which updated the publication of 2000, confirming the results.

The group at Imperial College participated in the W mass measurements using all the data collected at centre-of-mass energies between 183 and 209 GeV over the four years up to the closure of LEP in 2000. The data sample corresponds to an integrated luminosity of 683 inverse picobarns. The mass of the W boson was determined from the direct reconstruction of its decays into purely hadronic events (4 quark channel) and semi-leptonic events (2 quarks + lepton + neutrino). To minimise any effect from colour reconnection a new procedure was adopted in which low energy particles were not considered in the mass determination from the purely hadronic channel. The final paper “Measurement of the W boson mass and width in e+e- collisions at LEP” was published in 2006. The combined result from all channels is
Mw = 80.440 ± 0.043(stat.) ± 0.024(syst.) ± 0.009(FSI) ± 0.009(LEP) GeV/c2
where FSI represents the possible effects of final state interactions in the purely hadronic channel. From two-parameter fits to the W mass and width, the W width is found to be
Gw = 2.14 ± 0.09(stat.) ± 0.04(syst.) ± 0.05(FSI) ± 0.01(LEP) GeV.