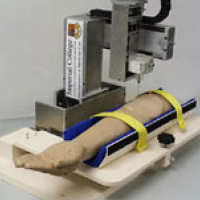 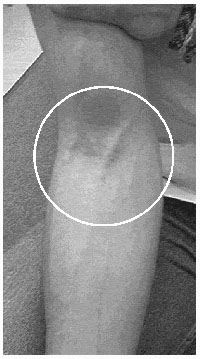 The pattern of veins in the area varies from individual to individual.

The Bloodbot identifies the location of a suitable vein by pressing a probe against the surface tissue of the ante-cubital fossa and measuring the force on the probe. The difference in the characteristics of the tissue from its surroundings, in response to the applied force, indicates the presence of a vein.

Once a suitable vein has been found, it inserts a needle under force control. When the needle penetrates the vein (identified by its force/position profile), the control system prevents further insertion, thus avoiding overshooting the vein.

Initial tests were carried out on a phantom made by Limbs and Things, designed to accurately simulate the behaviour of the tissues of the ante-cubital fossa.

It is a pad on which there is a layer of jelly in which rubber tubes are embedded. The tubes are filled with artificial blood. The whole pad is covered by a latex membrane, simulating the skin. The picture shows the 'skin' removed and some of the tubing exposed.

Initial tests showed that it was feasible to develop a special-purpose robot to take blood from the forearm. 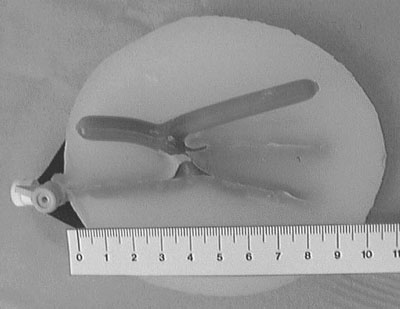 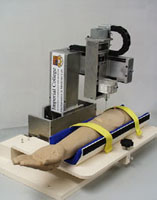 The Bloodbot has three powered (linear motion) axes and one unpowered (rotational) axis. All the motors are inexpensive stepper types.

The first axis moves a carriage up and down, so that it goes towards and away from the arm that is strapped in under it. This carriage is used to hold either a blunt probe (for finding a vein) or a syringe and needle. A piezo-resistive force sensor is mounted on the carriage to measure the force on the probe or needle.

The third axis, which is unpowered, enables a human operator to tilt the robot. This is so that, once a vein has been found, the needle can be inserted into the arm at the correct angle.

The fourth axis moves the whole robot along the length of the arm. This was designed to compensate for the slight difference between where the probe has identified a vein, and where the needle enters the skin, once the robot has been tilted.

Identifying the position of a vein

The graph shows the way the force changes with position as a probe is pressed against the surface of the skin.

At point A, the probe starts pressing against the skin. From B to C the force/position is linear and the gradient of the line represents the elasticity of the tissue. The gradient is different if a vein is present.

Inserting a needle without overshooting

The force on a needle was measured as the needle was inserted throught the skin and into the vein. Vein breakthrough is indicated by a force drop after a peak. The Bloodbot recognises this feature and halts the insertion of the needle.

The system was tested on the phantom and the results obtained were consistently good.

The ideal situation would have been to test the system on a wide range of patients. However, because of the difficultly in obtaining permission to test medical devices, the system was tested on only one human patient. The vein location phase was tested on the patient and the vein was located correctly about 78% of the time. The needle insertion was also tested and worked. This test was not repeated, so as to avoid multiple scarring.

More tests need to be carried out on a wider range of patient types (elderly, infants, obese, etc.) to more accurately determine the performance of the robot and to enable further developments to be carried out.

The links in this section may expire. Please email Alex Zivanovic if this happens.

This article was then used as a source of numerous other articles, including:

The BBC's popular science TV programme "Tomorrow's World" took up the story and filmed the first trial of needle insertion on a human. The episode was aired on Wednesday 7th March 2001, with an associated article on the Tomorrow's World website.

The Bloodbot is on display in the Wellcome Wing of the Science Museum in London from Thursday 8th March 2001 to Thursday 22nd March 2001.

The "Tomorrow's World" screening led to a number of articles, including:

There was a short film clip aired on a RTL, a German TV channel, on Monday 12th March 2001.

There was an article on the Sky News website.