Nature is often a good inspiration for demanding engineering tasks and, particularly, a novel smart actuator has being inspired by the penetration strategy developed by ovipositing wasps: these insects can penetrate different kind of tissues (wood, leaves, host larvae) to lay their eggs. The ovipositor of the wood wasp, Sirex noctilio, for example, has the main function of delivering eggs through a hollow tube along its length. Its tip is about 0.2~0.3mm in diameter and can drill to a depth of up to 20mm into the sapwood of a tree. The applicability of the wood wasp’s anatomy resides in the mechanism of drilling, which does not require rotary motion or impaction.

The ovipositor is made of two interlocked halves, or “valves,” rather like the zip on a “zip-lock” polyethylene bag, which slide relative to each other. Backward pointing teeth (numbered in Fig. 1b) hold on to the substrate, resisting pulling forces. The pull on one of the valves provides stabilization along the length of the ovipositor to prevent buckling so that the other valve can be pushed with an equal and opposite force, to produce a net force near zero. The reciprocating motion of the two valves drives the ovipositor’s penetration, as one valve is pushed deeper into the wood stabilized by tension generated in the other valve. Since there is no net force in the ovipositor assembly, there are no stability problems and there is no theoretical limit on its length.

Model of the biomimetic flexible and steerable probe:

ROBOCAST is a 3 year European project (Framework 7 funding) to develop an integrated neurosurgical suite. Robotic assistance, smart sensors, augmented reality and an intelligent user interface are among the deliverables of the project. Imperial’s involvement in ROBOCAST pertains to the development of the biologically inspired flexible probe for brain interventions, described above. Visit www.robocast.eu for more information. 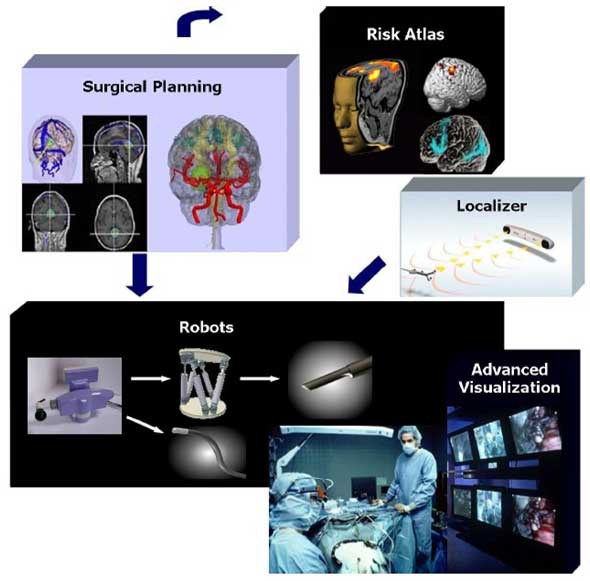