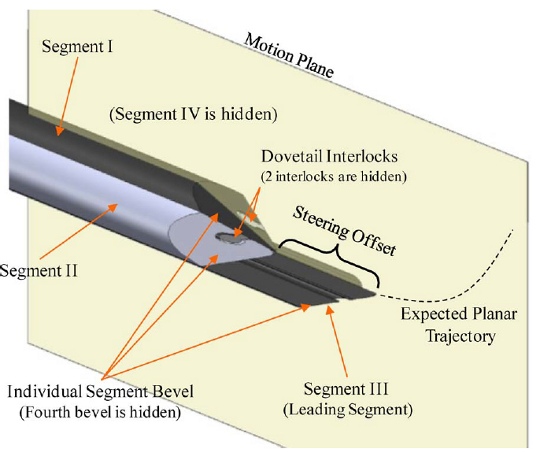 In the model, x, y, θ, and φ indicate the x-axis coordinate, y-axis coordinate, the approach angle, and the steering angle of the bicycle model, respectively, and v1 , v2 , and L indicate the forward velocity of a bicycle’s body, the rate of change of the steering angle, and the distance between front and rear wheels, respectively.

In the above model, the relationship between the forward velocity v1 and the rotational velocity θ ̇ determines the instantaneous curvature ρ of a real trajectory, and it is a function of the steering angle φ, i.e., ρ = tan(φ)/L [2]. Contrary to the bicycle model, however, in our probe, the instant curvature is assumed to be a function of the steering offset δt at the tip of the probe, as follows:

Where f(δt) is empirically assumed to be a monotonically increasing function of the steering offset. 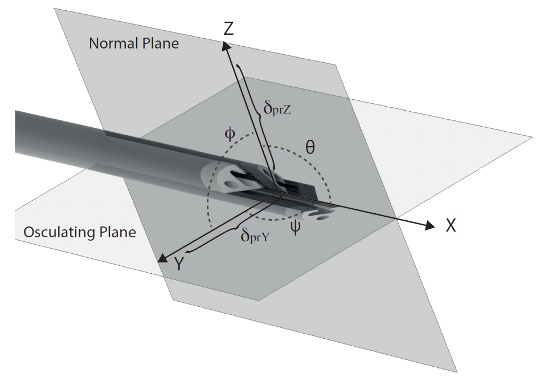 In the 3D kinematic model, a similar assumption as in the 2D Model, has been made for both the osculating and normal planes (see Figure), with the assumption that the ”effective steering offset” in 3D, which is a definition we use to describe how the different relative offsets between segments work together to produce a single overall tip orientation, is a function of all 4 parts of the needle.

As in the 2D model, the curvature in the osculating plane as well the torsion in the normal plane have been defined as proportional function to the virtual offset projection in the corresponding planes. 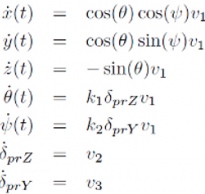 with v1 the cruising speed and v2 and v3 the relative speed of the segments in order to change the projections at the tip of the probe.

We have shown, previously [3], the concept of the ‘Programmable bevel’ where the steering angle of the needle, related to the curvature of the path taken, is a function of the offset between segments in 2D (Offset-Curvature relationship). We showed that this relationship is approximately linear between a bounded set of offsets. In the kinematic models above this is represented by setting κ to a constant. 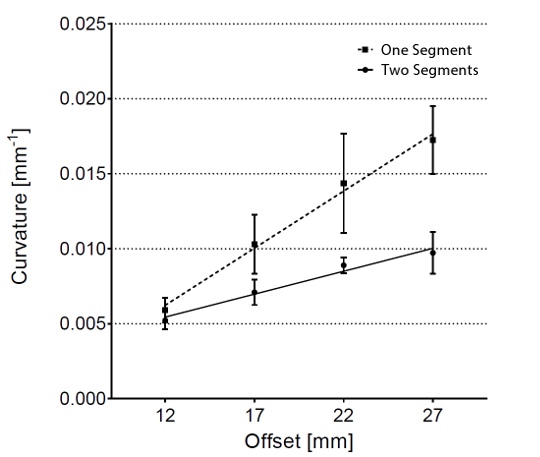