Neural surgery  may be of fatal risk.  To improve surgery safety, the  Mechantronics in Medicine (MIM) lab of Imperial College London has develop a new Minimal Invasive neurosurgery robot which is  soft and compliant needle capable of steering in the soft tissue of the brain.  Its design is inspired by the ovipositing wasps, which are capable of steering their stings in different tissues towards a target point. Besides the new robot,  MIM lab also develop many new technologies in surgery planning and execution. In further, the robot and new technology of  surgery planning and control will make the neural surgery produce less trauma, avoid the key functionality of the brain and reach the target deep in brain despite the  vibrating and deforming motion of a living brain.

To be reusable and extensible, the software system adopts a modular structure. Components areroughly categorized into three layers, as shown in Figure 4 The visualization and interface layer2) The communication managing layer3) The driver layerTo minimize coding work, for many components, several available open source software librarieshave been used.

The brain is very important and delicate organ, some areas serve key functionality, where trauma will be fatal (the white area). Surgery paths avoid such areas. The planning software first generates many safe paths, likes growing a tree.

The path is refined further because of the bending (curvature) behaviour of the flexible STING, which only bends gradually with a limit. 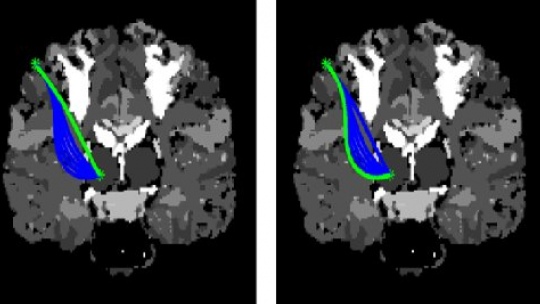