Computational technology towards future therapies for itchness via neuro-skin interactions

Skin is the largest organ of the body, and skin conditions are the most common reason for patients to consult their GP in the UK. Itchness is a main symptom of many skin diseases, including atopic dermatitis (AD), the most common chronic skin disease. This project aims to devise novel computational technology that will help developing future therapies and supporting self-management of health and wellbeing for skin conditions by intervention to neuro-skin interactions for the perception of itchness. Itchness is triggered at the periphery neurons in the skin, and then the neuronal signal is sent to the brain. Previous neuroimaging studies demonstrated a profound deactivation pattern in itch-processing brain areas for AD patients without clinical symptoms, suggesting a potential of suppression of perception of itchness and subsequent scratching behaviour, which could lead to skin barrier damage and the negative spiral of the skin condition. In this project, we will develop computational tools to identify the main neuro-skin regulatory mechanisms in the population of neurons leading to perception of itchness, and use it to artificially trigger itch-inhibiting deactivation pattern. Together with clinicians, we already developed mathematical model that explains the dynamic interplay between skin barrier homeostasis and immune reactions in AD, from a control engineering perspective. Control-theoretical analysis of the combined model of neuro-skin and skin-immune reactions will identify the possible points of intervention to regulate the perception of itchness and stop the negative spiral of the skin condition. Computationally identified points of intervention at the periphery neurons in the skin will be tested with AD mouse models. 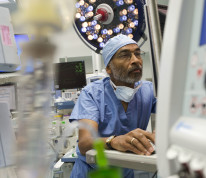