An international team of astronomers has announced the discovery of the most distant quasar yet seen. The quasar is an extremely bright source of light visible at infrared wavelengths, emitted as gas falls into a very massive black hole. The scientists have named it ULAS J1120+0641.

The discovery came to light thanks to data from an ongoing survey of the sky that is being conducted by scientists at the UK Infrared Telescope in Hawaii. Dr Daniel Mortlock from Imperial College London is lead author on the paper describing the discovery, which is published in the journal Nature today.

Looking further away in space means looking back in time, because of the time the light takes to travel. Therefore by looking further away astronomers can view the history of the universe. Light from the quasar reaching Earth now has travelled for nearly 13 billion years (13,000 million years), meaning that we are seeing the quasar as it was when the universe was only six per cent of its present age, just 770 million years after the Big Bang. The newly discovered quasar lies in the constellation Leo, a few degrees from the bright galaxy Messier 66.

"The thing that is particularly important about this quasar is how bright it is," said Dr Mortlock. "It’s hundreds of times brighter than anything else yet discovered at such a great distance. This means that we can use it to tell us for the first time what conditions were like when the universe was young."

Looking back in time

A quasar is formed when matter falls into a massive black hole at the centre of a distant galaxy. As it spirals in, the gas becomes extremely hot, emitting intense ultraviolet radiation. As the light emitted by a quasar travels towards us it is stretched by the expansion of the universe. This stretching is known as the redshift. The further the light travels, the greater the redshift. So by measuring the redshift astronomers can establish the distance of the light source, and how far back in time they are seeing. 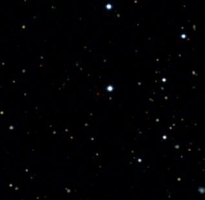 Ultraviolet light emitted by the quasar is stretched as it travels through space, so it appears as infrared light.

Ultraviolet light from the quasar has been stretched to infrared light, which can be seen on Earth by the telescopes in Hawaii. Cosmologists can study this light in detail to find out what conditions were like in the gas surrounding the quasar at that early time.

Most of the gas in the universe is hydrogen, and at the present time it is mostly ionised, meaning that the atoms have been stripped of electrons. The hydrogen was ionised by quasars and hot stars, when they first formed, at a moment in the early history of the universe called the 'epoch of reionisation'. Before that time the hydrogen was mostly neutral, meaning the electrons and protons of hydrogen were combined. The scientists say that this quasar is seen far enough back in the history of the universe, that for the first time they can see the signature of neutral hydrogen.

The signature of neutral hydrogen was predicted in 1998 but it has never been observed before. "Being able to analyse matter at this critical juncture in the history of the universe is something we’ve been long striving for but never quite achieved," said Professor Steve Warren, leader of the quasar team in Imperial's Department of Physics. “Now it looks like we have crossed the barrier with this observation. It’s like discovering a new continent which we can now explore."

The mass of the black hole at the centre of the quasar also came as a surprise. Measurements of the light from the quasar show that the black hole had a mass of two billion of our suns. "This gives astronomers a headache," said Dr Mortlock. "It's difficult to understand how a black hole this massive can have grown so early in the history of the Universe. It's like rolling a snowball down the hill and suddenly you find it’s 20 feet across!"

The team plans further detailed observations of ULAS J1120+0641, but also hope to find more such distant but bright quasars. Dr Mortlock said: "There may be 100 such objects spread around the whole sky, but finding them amongst the billions of other objects in astronomical images is a serious challenge!"