A synthesised compound which is also found in bear bile could help prevent disturbances in the heart’s normal rhythm.

Under embargo until
Tuesday 2 August 2011

A synthesised compound which is also found in bear bile could help prevent disturbances in the heart's normal rhythm, according to research published today in the journal Hepatology by a team from Imperial College London.

Source: World Society for the Protection of Animals

Ursodeoxycholic acid (UDCA) is manufactured as a drug to decrease production of cholesterol in the body and to dissolve gallstones. It is also present in many traditional Chinese medicines made from bear bile. However, the farming of bears for their bile has been condemned as cruel by animal rights groups, and the use of bear bile products is not encouraged by the study authors.

The new study suggests that UDCA could also potentially treat abnormal heart rhythm or arrhythmia, both in the fetus and in people who have suffered a heart attack. Laboratory tests suggested that UDCA acts on non-beating pathological heart cells called myofibroblasts, which interfere with how electrical signals travel across the heart.

UDCA is already used to treat a condition called obstetric cholestasis, which affects around one in 200 pregnant women in the UK and is linked to a higher risk of arrhythmia and sudden death in the fetus. UDCA lowers the levels of harmful bile acids which build up in the mother's blood in the disease and can pass into the infant through the placenta.

The study published today demonstrates for the first time that UDCA can prevent arrhythmia by altering the electrical properties of myofibroblasts. These cells are found in the fetal heart but disappear shortly after birth. However, they reappear in patients that have had a heart attack, when they are involved in laying down scar tissue.

The study found that these cells disrupt the transmission of electrical signals that control the heart's rhythm. The study is the result of a long-term collaboration between two Imperial research groups, headed by Dr Juila Gorelik, at the National Heart and Lung Institute and Professor Catherine Williamson at the Institute of Reproductive and Developmental Biology.

Since UDCA can be synthesised chemically, there is no need to inflict any cruelty on bears and we do not encourage this.

"These findings are exciting because the treatments we have now are largely ineffective at preventing arrhythmia in patients who develop an abnormal heart rhythm after a heart attack," said Dr Julia Gorelik, the study's senior author. "Our results from the lab suggest that UDCA could help the heart muscle conduct electrical signals more normally. We're hoping to set up a clinical trial to test whether these results translate to patients with heart failure.

“The medical uses of UDCA are not a reason to take bile from bears. Since UDCA can be synthesised chemically, there is no need to inflict any cruelty on bears and we do not encourage this.” 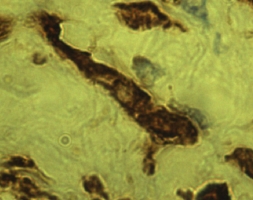 A micrograph of the human fetal heart, showing ordinary heart muscle cells in yellow and myofibroblasts in brown.

The researchers became interested in the role of myofibroblasts after observing that they appear in the heart tissue in the second and third trimesters of gestation, when sudden death of the infant is most common in pregnancies affected by obstetric cholestasis.

The researchers grew myofibroblasts on top of heart muscle cells in the laboratory to create a model for studying the fetal heart. Then they used a number of specialised microscopic techniques to study how the cells communicate to relay electrical signals.

Exposing the cells to high level of bile acid, as found in the mother's and fetal blood in obstetric cholestasis, caused the cells to conduct electrical signals more slowly and increased the likelihood of arrhythmia. This effect was not seen when there were no myofibroblasts present among the heart muscle cells, as in the healthy adult heart.

When the cells were exposed to bile acids and UDCA, it altered the electrical properties of the myofibroblasts, and the electrical signals propagated across the cell culture more regularly, as the video below shows.

"Myofibroblasts affect the propagation of electrical signals that co-ordinate the pumping function of the heart," said Dr Michele Miragoli, first author of the study. "Complications from obstetric cholestasis occur most commonly in the last trimester of pregnancy, when the density of myofibroblasts is highest in the fetal heart.

"Our study suggests that it is the appearance of myofibroblast cells that make the fetus vulnerable to arrhythmia in obstetric cholestasis. We think that targeting these cells could be an important new approach for preventing abnormal heart rhythm, not just in the fetus, but also in people who have had a heart attack."

The study was funded by Action Medical Research, the Wellcome Trust, the Swiss National Science Foundation, and the Imperial Comprehensive Biomedical Research Centre, which was e stablished by a grant from the National Institute of Health Research.

Consistently rated amongst the world's best universities, Imperial College London is a science-based institution with a reputation for excellence in teaching and research that attracts 14,000 students and 6,000 staff of the highest international quality. Innovative research at the College explores the interface between science, medicine, engineering and business, delivering practical solut ions that improve quality of life and the environment - underpinned by a dynamic enterprise culture.

Since its foundation in 1907, Imperial's contributions to society have included the discovery of penicillin, the development of holography and the foundations of fibre optics. This co mmitment to the application of research for the benefit of all continues today, with current focuses including interdisciplinary collaborations to improve global health, tackle climate change, develop sustainable sources of energy and address security challenges.

3. The Wellcome Trust is a global charitable foundation dedicated to achieving extraordinary improvements in human and animal health. It supports the brightest minds in biomedical research and the medical humanities. The Trust's breadth of support includes public engagement, education and the application of research to improve health. It is independent of both political and commercial interests.

4. Action Medical Research is the leading UK-wide medical research charity dedicated to helping babies and children. We know that medical research can save and change children's lives. For nearly 60 years we have been instrumental in significant medical breakthroughs, including the development of the UK polio vaccine and ultrasound scanning in pregnancy. Today, we continue to find and fund the very best medical research to help stop the suffering of babies and children caused by disease and disability. We want to make a difference in: * tackling premature birth and treating sick and vulnerable babies * helping children affected by disability, disabling conditions and infections * targeting rare diseases that together severely affect many forgotten children.