Improving the energy efficiency and environmental impact of the oil industry will be the focus of a $US 10 million international partnership, announced today in Russia.

Imperial College London, the Boreskov Institute of Catalysis and the Skolkovo Foundation jointly announced the signing of a Letter of Intent, which could lead to an international research consortium for reducing heat loss in oil refining by up to 15%. The work will aim to improve refining operations, enhancing oil production processes, increasing safety in plants, and reducing COâ emissions.

Imperial will play a key role in the consortium, carrying out research to find ways of reducing heat loss by improving the design of heat exchange equipment and energy recovery networks within refineries. The three-year project will also see the College’s knowledge transfer consultancy, Imperial Consultants, facilitating academic and industrial partnerships to ensure that the research carried out by the consortium will be translated into benefits for society and industry.

Professor Sir Keith O’Nions, FRS, Rector of Imperial College London, says: “The ongoing development of Russia’s oil industry is a major part of the country’s efforts to modernise its economy and infrastructure. Imperial has worked on projects for oil companies around the world and we look forward to ensuring that the research from this collaboration translates into real energy savings and environmental improvements.” 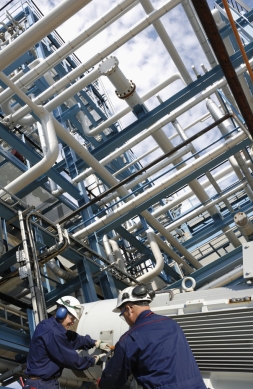 Crude oil fouling in refinery pipes damages the process and can increase COâ emissions in the environment.

One of the major problems that consortium partners will focus on is crude oil fouling - the largest cause of heat loss in the refining process. This happens when oil impurities are deposited in piping, causing corrosion and wear. This creates a build up of deposits that can lead to oil production losses and additional fuel being burnt in the refining process. The fouling also causes increases in COâ emissions, which are estimated to be responsible for 2.5% of all man-made COâ emissions, and causes significant operational and safety problems, with large economic impact.

Imperial’s academics will build on research they are already carrying out, to investigate in more detail how fouling occurs, so that they can determine the best ways of reducing it. They will carry out research in state-of-the-art labs in the College’s Department of Chemical Engineering and develop computer modelling and simulations of the process.

The College will also run a series of exchange visits and collaborative workshops with Russian research colleagues to strengthen research capacity and to close the gap between scientific research and industrial application.

The project will be funded by the Skolkovo Foundation’s Energy Efficiency cluster.