King's and Imperial join the partnership behind the Francis Crick Institute, as a time capsule is buried under the building site for future scientists

King's College London and Imperial College London have formally joined the partnership behind the Francis Crick Institute.  The two universities have become part of the project to create the world-leading medical research institute in central London founded by the Medical Research Council (MRC), Cancer Research UK, the Wellcome Trust and UCL.

The Institute will have a distinctive vision of how medical and scientific research will be conducted. Its work will focus on understanding the underlying causes of health and disease and accelerating discoveries made in the laboratory into the clinic.

The impact of the Francis Crick Institute will go well beyond improvements to our health and wellbeing and invaluable job creation. It will keep London and the UK at the forefront of the battle to understand health and disease and further anchor the capital as a world leader in scientific research.

The signing ceremony followed the burial of a time capsule at the site of the Institute at St Pancras and Somers Town in London witnessed by the Mayor of London Boris Johnson, the science minister David Willetts MP, and the Director and Chief Executive of The Francis Crick Institute Sir Paul Nurse. Francis Crick's daughter Gabrielle, accompanied by several members of the Crick family, buried the time capsule.

Once the time capsule was buried on the site, Imperial College London and King's College London formally joined the partnership at a ceremony at the Wellcome Trust's offices in London.

Sir Keith O'Nions, the Rector of Imperial College London, said: "The Francis Crick Institute will bring an unparalleled level of science and engineering research to bear on the diseases and health issues the world now faces. This is an exciting venture for Imperial, for London and for UK science, and we are delighted to be signing the agreement today."

David Willetts, the Universities and Science Minister said: "The UK has a proud record of scientific achievement built on the work of great institutions like those involved in The Francis Crick Institute. It's been a great honour to contribute to the time capsule being buried today. The Institute will maintain our country's leading position in biomedical research and help translate the findings into benefits for patients and the economy." 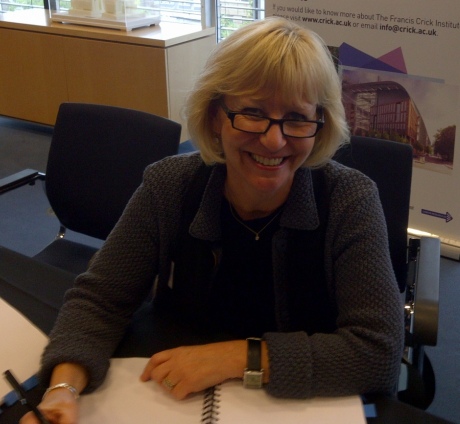 The Mayor of London, Boris Johnson added: "London is home to some of the world's foremost scientific and medical institutions, who are responsible for extraordinary innovations that benefit people not just here but across the globe. The impact of the Francis Crick Institute will go well beyond improvements to our health and wellbeing and invaluable job creation. It will keep London and the UK at the forefront of the battle to understand health and disease and further anchor the capital as a world leader in scientific research. I am delighted that the London Development Agency has been able to play an important role in supporting project partners, the Medical Research Council, Cancer Research UK, UCL and the Wellcome Trust, to see this project come to fruition."

The Director and Chief Executive of The Francis Crick Institute, Sir Paul Nurse, said: "This is a symbolic moment. In this time capsule, we are making clear our aspirations for the Institute to future generations who will be the final judges on whether we have succeeded in this extraordinary endeavour. With the accession of Imperial and King's to the partnership, we will have an opportunity to work with many of the best scientists and clinicians in the world. We hope that together they will improve lives and help deliver the innovations that will bring long-lasting benefits to the economy and people's health."

The chairman of The Francis Crick Institute, Sir David Cooksey said: "King's College London and Imperial College London have extraordinary clinical and scientific skills which will help to foster new ideas and will bring enormous value to the partnership. The Institute will become a national asset - working with universities, institutes and hospitals, connecting scientists from different disciplines with clinicians and industry to bring health and economic benefits to the UK and beyond."

The Principal of King's College London Professor Sir Rick Trainor said: "King's is delig hted to play a key role in this world-leading Institute, bringing experts from a wide range of disciplines to work collaborat ively under one roof.

"King's has an excellent track record in bringing scientists and clinicians together to translate research into innovat i ve treatmen t s as quickly as possible. Our exp ertise will strengthen further the Institute's ability to bring basic and applied science together with clinical knowledge, to benefit patients across the UK as well as society as a whole."

Adapted from a press release issued by The Francis Crick Institute

The Director and Chief Executive of The Francis Crick Institute, Sir Paul Nurse, is speaking at Imperial at 18.00 on 22 November 2011. To register for a free place at his talk, 'What is life?', please email events@imperial.ac.uk. The brass capsule, placed 12 metres under the foundations of the Institute, is not expected to be unearthed for decades to come. It contains letters from world-leading scientists, local children's artwork (from St Mary and St Pancras School and Hampden Youth Club), architects' sketchbooks, two biographies of Francis Crick – including David Willetts' personal copy of Matt Ridley's book – as well as photographs and memorabilia.