The capacity of terrestrial ecosystems to absorb carbon dioxide emissions from human activity may be greater than previously thought, according to a new study - News

The capacity of terrestrial ecosystems to absorb carbon dioxide emissions from human activity may be greater than previously thought, according to a new study published in Nature Climate Change, which looks at how plants react to environmental change. The authors say these results improve our ability to look into the planet's future and predict the magnitude of climate change before it happens.

The scientists from Imperial College London and University of York were investigating how changes in temperature and atmospheric carbon dioxide levels - such as those predicted under the effects of global climate change - affect soil respiration and a plant's rate of growth, photosynthesis and respiration.

The research addresses a key question in environmental science about whether an increase in global temperatures will cause an increase or a decrease in the ability of ecosystems to absorb carbon dioxide from the atmosphere, a problem for which scientists do not yet have a convincing answer. Some scientists have suggested that increases in temperature will cause the release of greenhouse gases from ecosystems such as oceans and soils, possibly resulting in ‘runaway’ climate change, where environmental change passes a tipping point and exacerbates its own effects. Others have suggested that an explosive growth of plants and algae will help to mop up excess carbon dioxide from the atmosphere. Following the results of this study, the scientists conclude that, with the help of plants, the Earth’s terrestrial ecosystems may well have more capacity to buffer against ‘runaway’ climate change than scientists previously thought.

The scientists grew plants in sealed experimental cabinets, providing them with soil, light, water, and a controlled atmosphere that mimicked possible future temperatures and levels of atmospheric carbon dioxide. Over several months they measured how well the plants absorb carbon dioxide under these changing environmental conditions. They noted that the plants absorb a large proportion of additional carbon dioxide gas that was introduced to the cabinet, preventing the temperature from increasing more than 2.3ºC. They observed this under the environmental conditions that match one of the Intergovernmental Panel on Climate Change (IPCC) optimistic scenarios of man-made greenhouse emissions by 2100, in which the population rises to 9 billion in 2050 before declining, and efforts are made to reduce human effect on the environment. 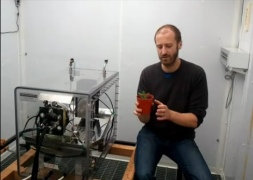 Dr Alex Milcu from Imperial's Department of Life Sciences, who is the corresponding author of the research, said: "Experiments of this nature are key to accurately predicting the future levels of carbon dioxide and global temperatures. We are really improving our understanding of how plants react to global environmental changes, but a discrepancy exists between our results, those from 'open' unsealed experiments, and data from the best computer simulations. Right now, the best way to improve these simulations is through more experimental work to understand the way that carbon cycles between soil, vegetation and the atmosphere.

Co-author Dr Martin Lukac, now based at the University of Reading, said: “Our results from the climate-controlled cabinets suggest the role plants have in cleaning up excess carbon dioxide from the atmosphere may be pretty good – at least at lower levels of anthropogenic carbon dioxide emissions. We do have to be cautious in scaling up the results from our sealed-cabinet experiments to the whole world, and probably would not expect to see such a strong effect in real ecosystems due to additional limiting factors such as nutrient and water availability." 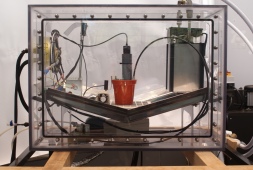 The experiments were carried out at the Natural Environment Research Council (NERC) Ecotron facility at Imperial's Silwood Park Campus. Scientists hope that this type of experiment with real plants will complement work done with computer simulations of the carbon cycle. Some computer simulations have suggested a much less robust ability of plants to continue to absorb carbon dioxide emissions from human activity. Researchers are now looking to repeat the experiments, with the inclusion of an analogy of the world’s oceans – one of the other key global systems influenced by and affecting atmospheric carbon dioxide levels.

Co-author Professor Phil Ineson, from the University of York, said: "Computer climate models have become increasingly complex and I wanted to go back to basics. We achieved this by somewhat radically building a 'physical' model of the terrestrial carbon cycle. This is equivalent to using a wind tunnel, as opposed to a computer simulation, to test the aerodynamics of a new structure. Our experimental findings made total sense but suggested that the capacity of the Earth to buffer against rising carbon dioxide may be gre ater than the computer models imply – we still have the same major concerns about climate change , but the Earth system may ha ve some tricks up her sleeve!"