More than 600 million people could be fed each year by halting the spread of fungal diseases in the world's five most important crops, according to research published today in the journal Nature.

Furthermore, data reviewed by scientists suggests that in 70% of cases where infectious disease causes the extinction of a type of animal or plant, an emerging species of fungus is behind the problem. Evidence suggests this figure is increasing.

The scientists behind the study, from the University of Oxford, Imperial College London, and institutions in the US, are calling for new solutions to prevent the proliferation of existing and emerging fungal infections in plants and animals in order to prevent further loss of biodiversity and food shortages in the future.

Fungal infections presently destroy at least 125 million tonnes of the top five food crops - rice, wheat, maize, potatoes and soybeans - each year, which could otherwise be used to feed those who do not get enough to eat. These crops provide the majority of calories consumed by people.

The damage caused by fungi to rice, wheat and maize alone costs global agriculture $60 billion per year. The effects are disproportionately catastrophic for those in the developing world, where 1.4 billion people live on less than $1.25 per day, and rely most heavily on these low-cost foods.

Diseases like rice blast, soybean rust, stem rust in wheat, corn smut in maize and late blight in potatoes affect more than just productivity; many have wide ranging socio-economic costs. Trees lost or damaged by fungi fail to absorb 230-580 megatonnes of atmospheric CO2, equivalent to 0.07% of global atmospheric CO2, an effect the scientists say is likely to be leading to an increase of the greenhouse effect.

In animals, new fungal diseases increasingly threaten the existence of over 500 species of amphibian, as well as many endangered species of bees, sea turtles and corals. In the US alone, studies suggest the decline in bat populations caused by white nose syndrome fungus will lead to a dramatic rise in the insect crop-pests that the bats would otherwise eat, and a cost to agriculture of more than $3.7 billion per year.

Dr Matthew Fisher, from the School of Public Health at Imperial College London, and a corresponding author of the study, said: "The alarming increase in plant and animal deaths caused by new types of fungal disease shows that we are rapidly heading towards a world where the 'rotters' are the winners. We need strive to prevent the emergence of new diseases as we currently lack the means to successfully treat outbreaks of infection in the wild." 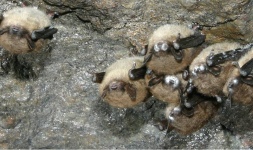 Bat populations have been affected by white nose syndrome

The article shows how instances of fungal diseases have been increasing in severity and scale since the middle of the 20th century, largely thanks to trade and travel, and now pose a serious danger to global food security, biodiversity and ecosystem health. The threat to plants from fungal infections has now reached a level that outstrips that posed by bacterial and viral diseases combined and is projected to continue rising.

The authors calculated that fungal infection could damage of up to 900 million tonnes of food if disease epidemics were to hit all the top five food crops in the same year. Although the chances of this happening are very slight, they estimate that this scenario would cause a global famine leaving over 4.2 billion people starving.

They are calling for tighter control of trade in plant and animal products that facilitate the spread of disease, and more research into tools that can predict emerging fungal infections so scientists can learn to halt the spread of existing diseases that are currently geographically isolated.

Corresponding author, Sarah Gurr, Professor of Molecular Plant Pathology at the University of Oxford, said: "Crop losses due to fungal attack challenge food security and threaten biodiversity, yet we are woefully inadequate at controlling their emergence and proliferation. We must have better funding channelled into the fight against fungal disease."

This work was supported by the BBSRC, NERC, Wellcome Trust, Leverhume Trust, Google.org, and the ERA-net project BiodivERsA, as well as the National Science Foundation and the National Institutes of Health in the US.

The Wellcome Trust is a global charitable foundation dedicated to achieving extraordinary improvements in human and animal health. It supports the brightest minds in biomedical research and the medical humanities. The Trust's breadth of support includes public engagement, education and the application of research to improve health. It is independent of both political and commercial interests. Website: http://www.wellcome.ac.uk.