The European Space Agency (ESA) has approved a new mission to explore Jupiter and its icy moons, to reveal fresh insights into the habitability of the ‘waterworlds’ orbiting the giant planets in our solar system and beyond.

Today at a meeting in Paris, ESA’s Science Program Committee voted to go ahead with the project, the Jupiter Icy Moons Explorer (JUICE), the first European-led mission to the outer solar system, and the first spacecraft destined to orbit an icy moon. The JUICE spacecraft is scheduled to launch in 2022, arriving in the Jupiter system in 2030.

Approval for the estimated billion euro contract for the mission came with UK researchers deeply involved in the leadership and planning for JUICE and playing a vital role in gaining approval for the mission ahead of rival bids. The proposal was led by a Professor Michele Dougherty from Imperial College London, and UK scientists make up four of the 15 members of the ESA Science Study Team for JUICE with the team including researchers from Imperial, Oxford University, University of Leicester, and UCL.

The primary target of the mission is the solar system’s largest moon, Ganymede, an icy world 8% larger than the planet Mercury. Ganymede is unique within the solar system – it is thought to harbour a deep ocean under the icy crust, it has its own internally generated magnetic field, and it has an ancient surface littered with more individual types of crater than anywhere else in the solar system.

If moons are common features of giant planets around other stars, then Ganymede may represent a whole class of potentially habitable environments in our galaxy. JUICE will carry experiments designed to study the sub-surface ocean, the geology and composition of the surface, and its interaction with its plasma environment, to assess its potential as a habitable environment in our solar system. The spacecraft will also investigate Jupiter’s other icy worlds, Callisto and Europa, as well as the giant planet’s complex atmosphere and extended magnetosphere.

Imperial, Oxford, Leicester and UCL will be among the UK institutions working to propose experiments to be carried as part of the spacecraft payload. These instruments will be specifically designed to study the gas giant, its icy moons and charged particle environment to an unprecedented level of detail, giving our most detailed characterisation of the Jovian system ever obtained.

Professor Michele Dougherty from Imperial's Department of Physics and lead scientist for the JUICE proposal, said: ‘Ever since Galileo’s discovery of the four largest moons of Jupiter, we’ve wondered what it must be like on their icy surfaces, looking into a night sky dominated by the gas giant Jupiter. From the volcanic moon Io, to the potential sub-surface oceans of Europa and Ganymede and the ancient cratered terrain of Callisto, these four moons are fascinating worlds in their own right.’ 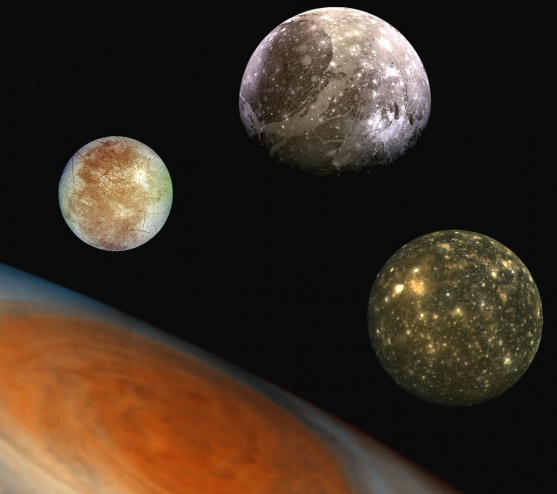 As well as making close measurements of the surface, sub-surface, magnetic and plasma environment of Ganymede the mission will also focus on the other icy moons; performing multiple flybys of Callisto and two flybys of Europa. By studying all three of these icy environments the mission’s studies of Ganymede will take on a broader significance.

Dr Leigh Fletcher of Oxford University, a member of the ESA Science Study Team for JUICE, said: ‘Scientists have had a lot of success detecting the giant planets orbiting distant stars, but the really exciting prospect may be the existence of potentially habitable ‘waterworlds’ that could be a lot like Ganymede or Europa. One of the main aims of the mission is to try to understand whether a ‘waterworld’ such as Ganymede might be the sort of environment that could harbour life.’

In order to assess whether Jupiter and its moons could provide habitable environments, and provide a model for gas giant systems orbiting other stars, the spacecraft will make an extensive study of the planet’s dynamic, evolving atmosphere, with its belts, zones and gigantic swirling storms, over the 3-year duration of the mission. JUICE will also study the magnetic and charged particle environment of Jupiter, which has the largest magnetosphere in the solar system, and its coupling to the moons (particularly Ganymede). 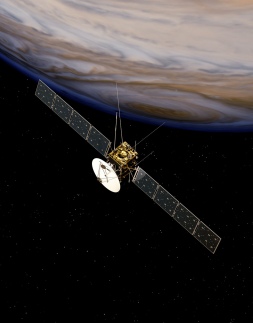 Dr Emma Bunce of the University of Leicester, deputy lead scientist for the JUICE proposal, said: ‘We need to place the possible habitability of these “waterworlds” into some broader context, and JUICE will do that by also studying the surrounding environment. Ganymede is strongly coupled to its parent Jupiter - through gravitational and electromagnetic forces – studying this interaction gives us further insight into its unique place in the solar system.’

Professor Andrew Coates of UCL, a member of the ESA Science Study Team, said: ‘Studying these watery worlds is the next vital step b eyond Mars in the se arch for the conditions for life in our solar system. Ganymede’s unique magnetic shield helps protect it somewhat from Jupiter’s harsh radiation belts and rapidly rotating magne tosphere, and we want to under stand its effectiveness. Europa and Callisto provide key comparisons as we search for the solar system’s ‘sweet spots’ for habitability.’

The data JUICE will send back about the varied environments of Jupiter and its icy moons will benefit many areas of science with geologists, astrobiologists, spa ce and atmospheric physicists all queuing up to see how the mission’s findings will affect their disciplines.

The announcement will lead to further opportunities for British companies as they look to bid for contracts to build elements of the JUICE spacecraft and its instruments. The UK Space Agency estimates that the space industry's overall contribution to UK GDP is £7.9 billion and that it employs nearly 27,000 people, with around 60,000 more jobs enabled by the space sector.