PET scanning study has important implications for future research into disorders such as schizophrenia, addiction and Parkinson's disease.

A study by Imperial College London scientists has provided an unprecedented insight into the roles nature and nurture play in our behaviour, with important implications for future research into disorders such as schizophrenia, addiction and Parkinson’s disease.

Dr Paul Stokes of the Department of Medicine and his colleagues spent over  three years performing brain scans on pairs of twins, measuring the function of the brain chemical dopamine. Dopamine has a reputation as the “pleasure chemical” because it is released in the brain in association with reward. “When people take a drug or drink alcohol, the reason that they get a feeling of pleasure or reward is because of dopamine release,” says Stokes. This chemical reward guides our behaviour and helps us to learn.“Dopamine is very important for normal processes within the brain, but also abnormal processes.”

Dopamine release in the brain varies among everyone, but very high or low amounts are associated with mental illnesses: excessive dopamine release occurs in people with schizophrenia, while very little is seen in those with alcohol and substance use disorders. A deficit in dopamine function is also thought to cause the slow working memory of people with Parkinson’s disease.

Neuroscientists are still deducing whether these changes in dopamine activity are the cause of mental illness or the result of it, but one of the most pressing mysteries to solve is whether they are inherited or not. As we now know that schizophrenia can be inherited, there is much interest in the possibility that dysfunctional dopamine activity could also run in families. The answer will have a huge impact on how such diseases will be treated in the future. “Understanding how genes and the environment have an influence on the dopamine system is very important,” says Stokes.

The striatum is located near the centre of the brain. (Image: Life Science Databases(LSDB))

Dopamine does most of its work in a part of the brain called the striatum, a roundish lump buried almost in the centre of your brain. “The striatum is a reasonably small area of the brain, but very important for reward, emotion, and some cognitive functions too,” explains Stokes. The striatum comes in three parts with different responsibilities. The limbic striatum hosts that sense of reward and the motivation it provides. The associative striatum controls working memory and other thinking processes, while the sensorimotor striatum helps govern movement. Stokes and his colleagues considered each of the three parts separately. 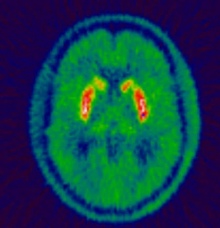 Their innovative study design involved a variant of the PET scan. PET detects tiny amounts of radioactivity within a subject’s body at high resolution, giving a series of “slices” that can be assembled into a 3D model. The radioactivity comes from a tracer injected into the subject. In this study, the scientists used F-DOPA, a chemical which acts as a marker of dopamine function. F-DOPA is converted into dopamine in the brain wherever dopamine is being released, so the  PET scans revealed where and how much dopamine activity was going on in the twins’ brains.

Looking at twins provides information about inheritance that is often unobtainable any other way. Because identical twins have exactly the same DNA, the differences between them have nothing to do with their genes. You can estimate how much of a trait, like height or intelligence, is inherited by finding out how similar it is in twins. For instance, height is highly heritable – twins are usually about equally tall – while intelligence is quite heritable and twins often have different IQs.

Like most twin studies, this one compared identical and non-identical twins. Non-identical twins share 50 per cent of their DNA, just like any other brother or sister pair, but are a better comparison to identical twins as they are also born at the same time. Stokes and his colleagues compared the dopamine function in the brains of the twin pairs and used statistical models to estimate how much of the difference was due to their genes and how much was due to environmental effects .

They reached two main conclusions. Firstly, the genetic inheritance and the individual experiences that make each of us unique have an important influence on dopamine function in the striatum. “These are normally experiences that happen a little bit later on in life, in adolescence or early adulthood,” explains Stokes. In contrast, factors in the familial environment, like the experience of sharing a home and growing up together, has little or no influence.

Secondly, the limbic striatum – the part central to reward and motivation – is much more affected by those experiences than the other parts. This suggests, intriguingly, that the pleasure centre and the behaviour it guides are sculpted mostly by life experiences rather than by our genes . This challenges previous assumptions that dopamine function could be straightforwardly inherited, making the causes of schizophrenia and addiction even more mysterious.

Stokes hopes that these findings will inform future research using such brain imagining techniques.  “What I’d like to do is try and make PET more useful in terms of diagnosis, treatment and outcome measures.” As a consultant psychiatrist for a large West London community mental health team, Stokes wants his imaging studies to feed back into his clinical care. By recriting patients from his clinic into his studies, he wants them to be the first to benefit from advances in scientific diagnosis and therapy resulting from his research.

This research was supported by a grant from the Medical Research Council and is published in the journal Neuropsychopharmacology. Offering a reward can improve visual awareness in stroke patients