Three projects based on Imperial research will share almost half of &#163;20 million (GBP) new funding from the UK Government.

The projects aim to reduce the cost of low carbon energy. Carbon Capture and Storage (CCS) technologies, if developed on a large scale, could reduce the contribution that coal and gas power plants make to national carbon emissions. In the future, this could include strategies to store greenhouse gasses underground or convert them to commercially useful products.

Thirteen projects run by scientists in universities and energy companies were given a financial boost by the Department of Energy and Climate Change (DECC), who hope to advance technology for CCS and make it more attractive to investors in the UK. 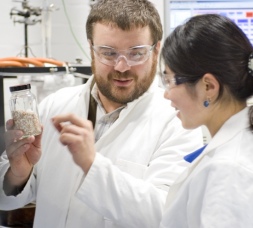 Dr Paul Fennell is working with the Millenium Generation project

The Millennium Generation project aims to build a prototype power plant in Doncaster in the north of England, incorporating a combination of low carbon technologies that could reduce the costs of implementing CCS by 20%. Imperial’s Dr Paul Fennell, from the Department of Chemical Engineering, is working with chemical technology company Calix and energy engineers at HEL-East to develop a plant to generate up to three megawatts of electricity while capturing 90% of the carbon waste and creating agricultural lime – a product that farmers use to improve soil conditions for their crops – using a byproduct of this process. The project will receive £5.8 million towards demonstrating that these ideas could make it economically attractive to decarbonise electricity generation on a large scale in the UK.

Dr Daryl Williams, from the Department of Chemical Engineering, is working to reduce the amount of energy required to carry out carbon capture after the combustion process has occurred. His team hopes to do this by improving the efficiency of fluids called amines, which are used to capture carbon dioxide. The team are designing equipment that can be retrofitted to existing power plant designs and avoids problems with corrosion that affects current designs. Dr Williams and colleagues are working with an Imperial spinout called Process Systems Enterprise Limited and the technology company Clean Carbon Solutions. Their project has received £3.35 million funding. 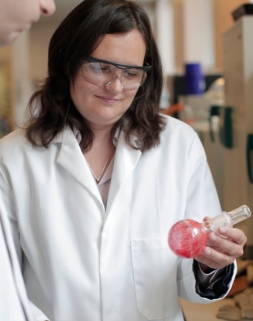 A third project will receive £100 thousand to make commercially valuable organic plastics from the waste carbon dioxide emitted by power stations and industrial plants. Led by Professor Charlotte Williams, from the Department of Chemistry, scientists at start-up company Econic Technologies hope to perfect a technique to help CCS pay for itself by creating substitutes for expensive oil-based hard plastics such as those used to make protective mobile phone casings, foam for furniture stuffing or insulation and flexible plastic coating such as electric cables.

In a public statement in December, Secretary of State for Energy and Climate Change, Edward Davey, said: "These announcements help maintain the UK's place leading the world in CCS and delivering an affordable and secure low carbon energy mix. Carbon Capture and Storage is a huge opportunity for our world class research industry. Through the projects we have selected, pioneering companies and universities will be able to create new jobs and expand their markets."

In December 2010, Professor Martin Blunt (Earth Science and Engineering), wrote in a briefing paper for the Grantham Institute for Climate Change -

“The UK is in a unique position to really capitalise on carbon capture and storage technology, thanks to a combination of industry expertise, the right kind of geology and concentration of industry along the coast. We could be a beacon to other countries, showing them how new industries could help mitigate the effects of climate change and generate jobs in the process. However, the UK is moving at a frustratingly slow pace. Our research shows that carbon capture and storage technologies are feasible and safe on commercial scale, however, governments and industry need to do more to ensure that CCS can play a vital role in reducing carbon emissions."