Blood thinners can be beneficial for some patients with bleeding disorders Contrary to medical opinion, blood-thinning medications may be safe and beneficial for some patients with an inherited bleeding disorder.

Contrary to medical opinion, blood-thinning medications may be safe and beneficial for some patients with an inherited bleeding disorder, according to survey results published in the New England Journal of Medicine today.

Blood thinners are taken to reduce risk of dangerous blood clots, but many doctors are reluctant to give them to patients who bleed excessively because it might make their symptoms worse, even though many of these patients also have a higher risk of blood clotting disorders such as deep-vein thrombosis (DVT) and stroke.

In an online survey, sufferers of an inherited bleeding disorder reported that blood thinners often make no difference to their symptoms. The data may help doctors to save more lives by prescribing these drugs to prevent DVT and stroke.

A team of medical students led by Dr Claire Shovlin from the National Heart and Lung Institute at Imperial College London recruited people with hereditary haemorrhagic telangiectasia (HHT), a disease affecting up to 1 in 5000 people that causes nosebleeds, often along with intestinal bleeding and large blood vessel malformations. The survey asked questions about their experiences of taking blood-thinning medications.

The responses showed that out of 379 people with HHT who had taken blood thinners about 43 per cent experienced no change or even an improvement of their nosebleeds. Only 13 per cent reported other bleeding events. When asked about their deceased relatives who had HHT, as many people reported that not taking blood thinners had contributed to their deaths as reported that blood thinners were detrimental.

I think there has been a tendency to be too cautious.

Dr Shovlin expects that the data will help doctors make more informed decisions about when and how to prescribe drugs for patients with HHT. “I think there has been a tendency to be too cautious. Our findings suggest that we ought to make an individual, personalised assessment for each patient and discuss the risks and benefits with them. Where the risks due to clotting are substantial, the data suggest it is reasonable to use blood thinners.”

Dr Shovlin believes the importance of excessive clotting in those with bleeding disorders is largely unrecognised. Her group recently showed that iron deficiency increases the risk of DVT in HHT sufferers. Iron deficiency is common in those who bleed regularly because they cannot replace the iron in their blood quickly enough. “People who bleed become short of iron, and certainly those with HHT, may end up with stickier blood. If this leads to complications, there is a need for blood thinners,” she says.

The survey analysis was performed by Hannah Devlin, a medical student completing her project for a BSc in Cardiovascular Medicine, supported by Anna Hosman of the Academical Medical Center School of Medicine, Amsterdam. The study was supported in part by the National Heart and Lung Institute’s BSc Project Funds and donations from families and friends of HHT patients. Dr Shovlin receives support from the Imperial Comprehensive Biomedical Research Centre, established with a grant from the National Institute of Health Research. 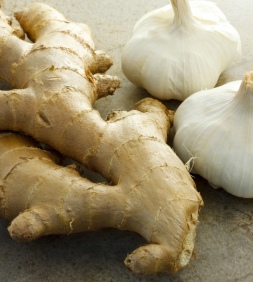 In another paper recently published in The Laryngoscope, Dr Shovlin’s group used data from the same survey to reveal how various lifestyle choices affected the severity of nosebleeds in people with HHT. Responses about medicines, habits, food and drink were analysed by Maneesha Silva, another BSc medical student.

"Certain findings were expected, with the study highlighting known culprits for worsening nosebleeds, such as dry air, alcohol and hot spices," Dr Shovlin said. "But when Maneesha brought her findings to me, the other dietary findings made no sense."

Ms Silva went on to research the composition of the food substances reported to make nosebleeds worse.  She discovered that all were rich in compounds with antiplatelet activity. Antiplatelets such as aspirin are one of the main classes of blood-thinning drugs. Many foods, such as chocolate and coffee, contain compounds related to aspirin. Others, such as garlic, ginger and ginseng, have other components with antiplatelet effects. A major surprise was omega-3 fatty acids, found in fish oil and health supplements, usually purported to have beneficial health effects. Many people with HHT reported that omega-3 made their nosebleeds worse.

“I was not expecting the reports to have such an obvious explanation,” remarks Dr Shovlin. “These results will enable people to go away, look at their diet in relation to the nosebleeds they experience, and plan.” The data could be particularly useful for people who have to attend important work meetings, perform in front of audiences or travel by plane, when an unexpected nosebleed can be unacceptable. “These findings give them an opportunity to modify their lifestyle to see if their bleeding episodes can be restricted to less important times. This kind of study provides results that go straight back to the patients.”

“We suspect the research also has implications for wider treatment decisions, because patients’ lifestyles might be masking or enhancing the effect of other prescribed medications. We are very grateful to the respondents who gave up their time to make these findings possible, and to the HHT Foundation International who advertised the study”