Huawei and Imperial have signed a memorandum of understanding (MoU) to consider the development of a research and innovation centre.

Huawei, a leading global information and communications technology (ICT) solutions provider, and Imperial, a world top ten university, will seek to develop the next generation of big data technologies.

Imperial and Huawei plan to collaborate on a joint R&D hub, enabling academic researchers and business experts to collectively develop innovations and applications in research areas including digital, energy, healthcare, future cities and life sciences.  The centre will focus on the emergent field of data science as Imperial and Huawei work to harness the latest scientific and technological breakthroughs around big data and translate them into real world applications.  The proposed joint centre would be located on Imperial’s new research and translation campus, Imperial West, in White City, West London.

The MoU was signed by Sir Keith O’Nions, President & Rector of Imperial College London, and William Xu, Chief Executive of Huawei’s Enterprise Business Group.  Oliver Letwin MP, Minister of State at the Cabinet Office, attended the signing ceremony at Imperial and underlined the Government’s support for the partnership. 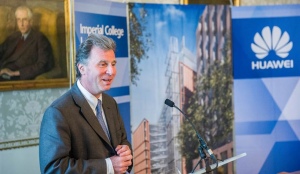 At the signing ceremony, Oliver Letwin MP said: “This particular venture is exactly what the government wants to see. Imperial is one of the greatest universities in the world, and there is a need for clear links between universities and industry. This initiative will be good for Imperial, Huawei and Britain.” 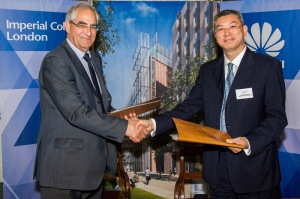 Under the terms of the MoU, Imperial and Huawei have also agreed to spend a year exploring other opportunities for collaboration over the next decade; a joint working party will be established to determine the next stages of the partnership.  Options being considered include a ‘Huawei-Imperial Joint Innovation Centre’ suite, which would be used by Imperial researchers, students and Huawei staff as a meeting and workspace. The suite could also act as a state-of-the-art demonstration centre where technology, including Huawei solutions, can be viewed by the public.

David Willetts MP, Universities and Science Minister, said: "Huawei's decision to collaborate with Imperial College London will keep the UK as a global leader in big data.  As one of the eight great technologies of the future, big data will allow scientists to research and analyse large information sets to support new innovations across industries such as space, bioscience and healthcare.  This initiative is good news for the UK's science base, universities and the economy."

Sir Keith O’Nions, President & Rector of Imperial College London, said: “We are excited to have taken the first step in what we hope will be a long-term collaboration with Huawei, a company which plays a major role in the global ICT industry.  Imperial and Huawei share a commitment to translating research, innovation and developing next generation data science technology for the benefit of society and the economy.  This parallels Imperial College’s broader vision for Imperial West.”

I am very excited by the potential of this partnership

William Xu, Chief Executive, Enterprise Business Group, Huawei, said: “Imperial is one of the world’s great universities and I am delighted to begin this relationship.  We intend for this Memorandum of Understanding to lead to a significant partnership in London and to reinforce our commitment to the UK.  R&D has always been a top priority for Huawei and this continues to be the case as we expand our UK operations.  Imperial College is a leader in global academic research, and the skills and expertise of the university will be invaluable in the development and success of Huawei Innovation Europe.  I am very excited by the potential of this partnership and look forward to working with the university over the next 12 months and beyond.”

Professor Gann explained that the Huawei partnership marks “the beginning of the next phase of our exciting and ambitious plans for Imperial West.” Professor Guo, an expert in data science, added: “Big data is the most exciting development in the world of ICT, and Huawei are a world-leader in its application.” 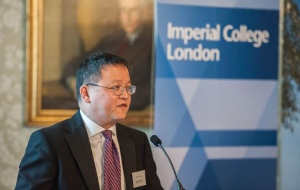 Victor Zhang, who has led Huawei UK as CEO since 2011, said: “Imperial, as one of the world’s leading Universities, has a reputation of innovation, leadership and rigor. This MoU is a symbol of Huawei’s continuous innovation collaborations with UK universities. I’m very excited that today will be the start of a long partnership and will mutually beneficial relationship for both Imperial and Huawei.”

Gordon Innes, speaking on behalf of the Mayor of London, highlighted the benefits to the capital: “The Imperial-Huawei venture is fantastic for London and exciting for both institutions, taking advantage of London’s great strength in R&D.”