Students rock on at the BBC 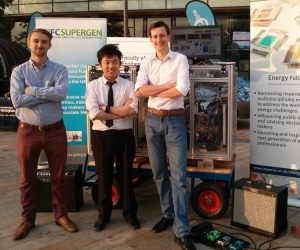 Sam, Billy and Michael at Media City with their generator in the background.

The PhD students, Billy Wu, Michael Parkes and Sam Cooper, took their zero-emission hydrogen fuel cell powered generator to the BBC’s Energy Day. By playing their electric guitar, which was powered by the prototype generator, live on the world’s longest running children’s show Blue Peter and on the BBC Breakfast programme, they demonstrated how noisy and environmentally unfriendly diesel generators that are typically found at music festivals could be replaced by their sustainable version.

You can watch the Blue Peter interview here.

The Imperial team built their prototype generator over the last five years in the Department of Mechanical Engineering as part of the Imperial Racing Green project, which brings students from different engineering disciplines together to design, build and race low emission vehicles. Developing the generator enables the students to learn about fuel cells and electric vehicle technologies. It also gives them the chance to raise public awareness about the environmentally friendly technology by taking it to events such as the BBC’s Energy Day.

"It was great being interviewed on Blue Peter - a show that many of us grew up watching."

PhD student working in the EFL on fuel cell research

Held at Media City in Salford, the BBC’s Energy Day showcased sustainable energy technologies to the public. Academics and other key figures were also invited to come and discuss on air the challenges the world faces in finding sustainable sources of energy for the future.

Billy Wu, who is also developing fuel cell technology as part of his PhD in  the Energy Futures Lab (EFL), the Colleges focal point for energy research, says: “The BBC is a great platform for public outreach and I think we generated a lot of awareness of hydrogen fuel cell technology. The event was open to the public and we got the chance to talk to people about the benefits of this zero-emission technology and its future potential.”

However, the team’s public outreach adventure didn’t all go off without a hitch. “As we were being interviewed live on BBC Breakfast, one of the EFL posters was caught by a gust of wind and fell onto Michael, my team mate,” said Billy Wu. “Luckily the news presenter was a real professional and handled the situation well, carrying on with the interview, while the backstage team acted swiftly to remove the poster off Michael and out of shot.”

Rosemary Peters also caught up with the team recently to hear first-hand about their prototype fuel cell generator in the latest edition of the Imperial Podcast.

One of the obvious highlights of the day for the team was being interviewed on Blue Peter, the iconic children’s television show. Michael Parkes was interviewed by hosts Barney Harwood and Lindsey Russell and got to play some tunes on his guitar.

“It was great being interviewed on a show that many of us grew up watching. I was a bit nervous after the poster had fallen on me during BBC breakfast, but it all worked out well and I was really pleased that they used my guitar playing,” said Michael.

The visit by the team to the BBC was funded by the Energy Futures Centre for Doctorial Training.

The fuel cell generator can produce up to 10 kW of electrical energy which is enough to power 3 typical UK households.

Hydrogen fuel cells combine hydrogen and oxygen, from the air, to make electricity with the only by-product being water.

The water produced by the fuel cell is 100 per cent pure and can be drunk, however this is not advised as it is ‘too pure’ and doesn’t contain the minerals that normal drinking water does. If you drank the water it would take the minerals from your body.