More than 100 Mechanical Engineering and Aeronautics staff and guests marked the naming of Imperial's City & Guilds Building on 18 September.

The ceremony marked the launch of a major redevelopment programme for what was previously known as the Mechanical Engineering Building on Imperial’s South Kensington Campus.

The City & Guilds Building, overlooking Exhibition Road, was built in the early 1960s and stands on the site of the former City & Guilds College building, constructed in 1885. It still houses the College’s original 19th century bell and clock mechanism.

City & Guilds College, founded in 1884 by the City of London Livery Companies, merged with the Royal School of Mines and Royal College of Science to form Imperial College London in 1907.

The refurbishment, due for completion in 2017, will provide new study and breakout spaces for students, improve all learning areas, upgrade the research environment, refresh administrative facilities and update the core infrastructure. Specialist facilities will include two new wind tunnels capable of producing 100mph wind speeds for use in research and teaching.

The City & Guilds Building’s Exhibition Road façade will be completely modernised, showcasing a flight simulator alongside other elements of the College’s work to passers-by.

We are proud of our historic connections with City and Guilds, which pre-date the founding of Imperial

Sir Keith said: “We are proud of our historic connections with City & Guilds, which pre-date the founding of Imperial College. It is wholly appropriate that we acknowledge this legacy. The Royal School of Mines and Royal College of Science already have permanent homes in South Kensington. We are completing the historic picture with the City & Guilds Building.

“The work that takes place here, within the Departments of Mechanical Engineering and Aeronautics, epitomises what makes Imperial great. The engineers, students, technicians and support staff working here are world-class; they deserve world-class facilities.”

Sir John spoke about the City & Guilds of London Institute as a pioneering provider of vocational education that still maintains deep links with Imperial. 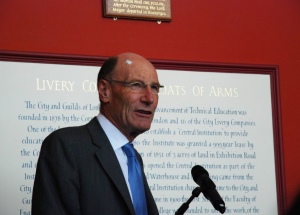 He said: “City & Guilds and Imperial are two organisations that will play important parts in the future of the UK, and they are bound together by a shared past. City & Guilds is the leading name in technological and vocational qualifications, while Imperial leads the world in engineering.