LUX's photon detecting mechanism is the most sensitive of its kind

They have set up the experiment to identify the nature of dark matter, an invisible substance that physicists believe is all around us, making up most of the matter in the universe, but that barely has any effect on our every-day lives.

Scientists have published the first results from the Sanford laboratory today, which, they say, validate the experiment's design and performance. The research challenges previous studies that claim 'sightings' of dark matter.

They are now beginning a process to uncover the exact identity of the dark matter particle - a process equivalent to the work done by the Large Hadron Collider in identifying the Higgs boson.

Seventeen universities and research institutes in the USA and Portugal, and Imperial College London, UCL, University of Edinburgh in the UK, run the LUX experiment, with most funding coming from the National Science Foundation and Department of Energy in the USA. 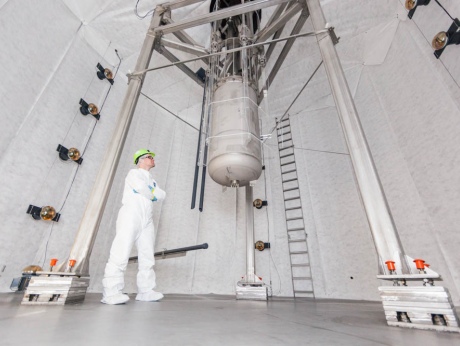 LUX detector is suspended in a large tank that will soon hold more than 70,000 gallons of ultra pure water

The new laboratory is sited in a former gold mine nearly one and a half kilometres below the Black Hills in the American state of South Dakota. Work on LUX started in 2008 and the experiment was completed ready for an initial run earlier in 2013.

Here, scientists are operating some of the world's most sensitive equipment in an extremely sheltered environment, because they are looking for tiny and extremely rare flashes of light that would indicate a collision between a dark matter particle and a normal matter particle.

"These instruments take many years to build and we are always pushing new technologies to the limit," says Dr Henrique Araújo from the Department of Physics at Imperial College London who leads the College's team working on LUX.

"It is very significant that LUX worked as designed when we finally pushed the 'on' button. Many experiments never reach this stage."

Physicists believe that dark matter accounts for about a quarter of the energy in the Universe, compared with ordinary matter, which makes up only a twentieth. The rest consists of the even more mysterious dark energy.

Since the experiment was installed underground in February, they have been looking for Weakly Interacting Massive Particles (WIMPs), which are the prime candidates to constitute the dark matter in our galaxy and in the Universe.

These particles are thought to have mass like normal particles and create a tiny gravitational pull, but cannot be observed directly since they neither emit nor absorb light at any wavelength. On the largest scales, its presence can be inferred from the motion of stars within galaxies, and of individual galaxies in galactic clusters. 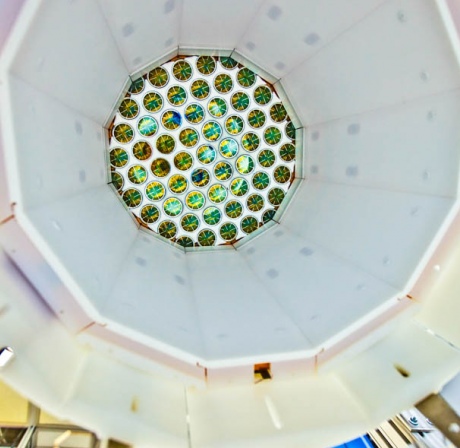 Collisions between WIMPs and normal matter are rare and extremely difficult to detect because cosmic-ray particles from space can overwhelm the already faint flashes expected from WIMPs.

Few cosmic rays can penetrate as deep underground as the LUX experiment and the detector is further protected from background radiation by being immersed in a shielding tank of ultra-pure water.

"LUX has significantly higher sensitivity than the previous world's best dark matter experiments – especially for the lightest WIMPs, which cause the faintest signals."

The new LUX result challenges evidence from other experiments where scientists have previously claimed to have data about the nature of WIMPs.

Dr Araújo says: "A number of previous results make it look like WIMPs exist with a particularly low mass. While this may still turn out to be the case, our new data reveal that, on that occasion, it was a case of mistaken identity."

A decade ago, scientists of the UK-led ZEPLIN programme deployed the first dark matter detector of this type underground at the Boulby mine in North Yorkshire.

"We had a pioneering role in what has become the world's most sensitive dark matter search technology, building and operating three detectors at Boulby."

"The last and most sensitive, ZEPLIN-III, was built by our team at Imperial – until we concluded our programme in 2011 – joining LUX soon after."

Scientists including Dr Araújo are already designing – and soon will start building – the next-generation experiment, LZ, which is the coming together of the two programmes – LUX and ZEPLIN.

With a 7-tonne liquid xenon target, LZ will be 30 times larger than LUX and have over 100 times better range. It will be so sensitive that it will be limited only by the interference of background signals from astrophysical neutrinos. These similarly illusive particles were once a candidate to explain the dark matter problem — but physicists now know they are not massive enough to do the job.

LZ is a collaboration of 26 institutes in the US, UK, Portugal and Russia. Dr Araújo from Imperial leads the UK team on LZ, which counts also with colleagues from Edinburgh, UCL, Oxford and Sheffield universities as well as the Rutherford Appleton and Daresbury national laboratories.

HOW DOES IT WORK At the heart of the experiment is a 6-foot-tall titanium 'thermal flask' filled with almost a third of a tonne of liquid xenon, cooled to minus 100 degrees centigrade.

When a WIMP hits a xenon atom it recoils – like a white billiard ball striking the opening triangle of coloured balls in a game of snooker – and photons of light are emitted; at the same time, this interaction also releases electrons from surrounding atoms.

The electrons are drawn upward by an electrical field and get absorbed into a thin layer of xenon gas at the top of the tank, releasing more photons.

Light detectors in the top and bottom of the tank are each capable of detecting these two photon signatures. The locations of the two signals can be pinpointed to within a few millimetres.

The energy of the interaction can be precisely measured from the brightness of the pulses of light. Any particles interacting in the xenon will cause these signals, but WIMP interactions are expected to have characteristic sizes which are quite different from those caused by ordinary particles.