Imperial has a rich heritage in the field of plasma physics and research into thermonuclear fusion energy, which continues apace to this day.

Ever since scientists discovered the secret behind the Sun’s prodigious energy output they have strived to replicate it. The goal: a near limitless supply of clean, zero-carbon energy that is inherently safer than conventional nuclear power.

Researchers at Imperial were some of the early pioneers who first devised experiments attempting to harness this ‘fusion’ power (see box, right).

The Sun is made up of plasma – hot, ionised gas – compressed by its own immense gravity. So it seemed logical that squeezing plasma might be a first step to emulate stellar fusion.

This is essentially what Nobel Laureate Sir George Thompson did while at the College in the 1940s. He found that passing electric current through a tube filled with hydrogen plasma generated a powerful magnetic field that compresses and heats the plasma.

The principle worked in a fashion, briefly, before the plasma became unstable and basically fizzled out. That set the tone for fusion research for the next 70 years.

“When it comes to confining plasma, a simple analogy is to imagine taking a handful of jelly and squeezing it as hard as you can — it’s going to end badly,” says Professor Roland Smith (Physics), Head of Plasma Physics at Imperial. “At the time people thought this would just work. What they didn’t realise was that when you squeeze plasmas they have so many different ways of going unstable.”

Still, thanks to the work of some pioneering plasma physicists over the decades – such as Imperial’s Professor Malcolm Haines, who sadly died last year – fusion research has tentatively progressed.

The most visible example of this is the $4 billion National Ignition Facility (NIF) in California (see our exclusive tour), where some 30 former Imperial PhD students are part of a team working to make fusion a viable energy source. NIF uses the world’s most powerful lasers to indirectly heat and compress fusion fuel.

Another large-scale approach is the ‘Z machine’ at the Sandia National Laboratories in New Mexico, which uses brief pulses of electricity at around 50 trillion watts to indirectly heat and compress its fuel.

In the past few years both of these facilities have been showing promising results with higher and higher output yields from their reactors. Yet they still don’t produce more energy than they actually need to kick start them. 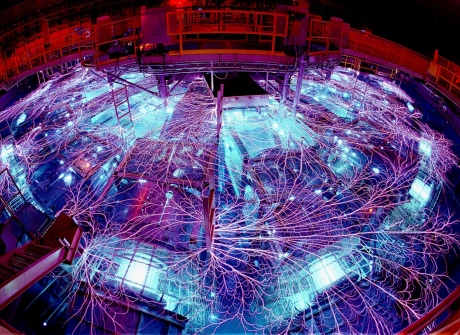 The Z Machine at Sandia Labs

Here at Imperial, researchers such as Jeremy Chittenden (Physics), Professor of Plasma Physics, look at data from NIF and Sandia and try to simulate the conditions by devising powerful computer models.

“It’s about working out where we should focus our efforts to improve. That can only be done by analysing the data that comes out, including x-ray images and neutron counts, that have embedded in them signatures of asymmetry that cause the instability,” says Jeremy. “Unfortunately, nature is much better at finding ways to make things go wrong than we are at anticipating them.”

Imperial also has its own lab scale experiment to probe extreme states of matter, dubbed MAGPIE. In a large room under the Blackett Laboratory, MAGPIE forces huge electrical currents through a web of wires several times thinner than human hair, which dissolve into plasma and are in turn compressed by magnetic fields, sending out a powerful pulse of x-rays. Studying those x-rays can help inform experiments at the larger Sandia Z machine facility. 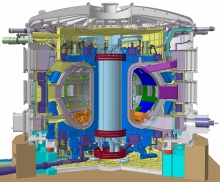 Looking to the future, an international collaboration is currently building a €16 billion fusion reactor called ITER in the south of France. Overseeing the UK’s involvement is Professor Steve Cowley, CEO of the UK Atomic Energy Authority and part-time academic at Imperial (formerly Head of Plasma Physics).

While it’s been a difficult road, the dream of fusion energy is very much still alive and it seems Imperial’s legacy in that is secure.

Professor Chittenden will give a talk on fusion energy on 5 February, register today for your place at Thermonuclear fusion versus Murphy's Law. In a fusion reaction atoms of hydrogen are squeezed together to form a helium nucleus. In the process, subatomic particles are expelled, such that the resulting mass is less than the sum of its original components. This extra mass is emitted as enormous quantities of energy – such that just one gram of fusion fuel has the potential to produce more energy than burning 10 tonnes of coal. The difficulty with fusion is that the the nuclei of the hydrogen atoms that make up the fuel are both positively charged and therefore repel one another. Squeezing them together and keeping them there for long enough to extract energy is the central challenge of fusion.