Four unknown galaxy clusters each potentially containing thousands of individual galaxies have been discovered some 10 billion light years from Earth.

An international team of astronomers, led by Imperial College London, used a new way of combining data from the two European Space Agency satellites, Planck and Herschel, to identify more distant galaxy clusters than has previously been possible. The researchers believe up to 2000 further clusters could be identified using this technique, helping to build a more detailed timeline of how clusters are formed.

What we believe we are seeing in these distant clusters are giant elliptical galaxies in the process of being formed.

Galaxy clusters are the most massive objects in the universe, containing hundreds to thousands of galaxies, bound together by gravity. While astronomers have identified many nearby clusters, they need to go further back in time to understand how these structures are formed. This means finding clusters at greater distances from the Earth.

The light from the most distant of the four new clusters identified by the team has taken over 10 billion years to reach us. This means the researchers are seeing what the cluster looked like when the universe was just three billion years old.

Lead researcher Dr David Clements, from the Department of Physics at Imperial College London, explains: "Although we're able to see individual galaxies that go further back in time, up to now, the most distant clusters found by astronomers date back to when the universe was 4.5 billion years old. This equates to around nine billion light years away. Our new approach has already found a cluster in existence much earlier than that, and we believe it has the potential to go even further." 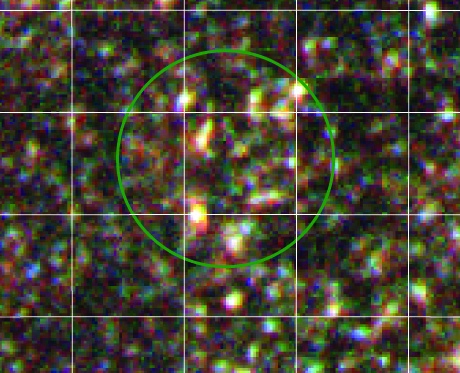 One of the most distant galaxy clusters ever found. The image is made up of three colour Herschel images of the clumps identified by Planck. Credit: Dave Clements/ESA/NASA

The clusters can be identified at such distances because they contain galaxies in which huge amounts of dust and gas are being formed into stars. This process emits light that can be picked up by the satellite surveys.

"What we believe we are seeing in these distant clusters are giant elliptical galaxies in the process of being formed," says Dr Clements.

Observations were recorded by the Spectral and Photometric Imaging Receiver (SPIRE) instrument as part of Herschel Multi-tiered Extragalactic Survey (HerMES). Seb Oliver, Head of the HerMES survey said: "The fantastic thing about Herschel-SPIRE is that we are able to scan very large areas of the sky with sufficient sensitivity and image sharpness that we can find these rare and exotic things.  This result from Dr. Clements is exactly the kind of thing we were hoping to find with the HerMES survey"

The researchers are among the first to combine data from two satellites that ended their operations last year: the Planck satellite, which scanned the whole sky, and the Herschel satellite, which surveyed certain sections in greater detail. The researchers used Planck data to find sources of far-infrared emission in areas covered by the Herschel satellite, then cross referenced with Herschel data to look at these sources more closely. Of sixteen sources identified by the researchers, most were confirmed as single, nearby galaxies that were already known. However, four were shown by Herschel to be formed of multiple, fainter sources, indicating previously unknown galaxy clusters.

The team then used additional existing data and new observations to estimate the distance of these clusters from Earth and to determine which of the galaxies within them were forming stars. The researchers are now looking to identify more galaxy clusters using this technique, with the aim of looking further back in time to the earliest stage of cluster formation.

The research involved scientists from the UK, Spain, USA, Canada, Italy and South Africa. It is published in the Monthly Notices of the Royal Astronomical Society. 2011 interview with Dave Clements on the Imperial College Podcast