Student callers reconnect with alumni and drum up support for scholarships With just over a week to go before the end of the spring 2014 telethon, student callers have raised almost &pound;152,408 in funds from 514 donors.

Imperial runs two telethons a year to generate support for the Rector’s Scholarship Fund and to provide almost 2,000 alumni with a chance to reconnect with Imperial. Over the course of each conversation, callers share the latest news from Imperial, update the alumnus’s contact details, and gather feedback on the College’s activities.

The telethon is also a professional development opportunity for the student callers, who get the chance to practise their communication and negotiation skills and receive informal careers advice.

Mala Mawkin (Medicine) is one of the student callers. She says the experience of interacting with alumni has been wonderfully diverse. “My conversations have gone everywhere”, she laughs. “People talk about how they’ve spent their time since Imperial, the companies they’ve set up, the babies they’ve had. I talked to someone who set up a fruit company and I talked to my lecturer’s dad once. Then there was someone who set up a company making iPhone apps for surgeons to use during surgery - that was quite cool.” 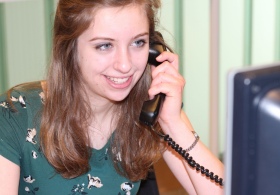 Alice Glyn (Biochemistry), pictured left, is another student caller who has appreciated the chance to reach out to alumni. “I like to talk about their career the most,” she says. “Some of the most interesting stories are of the scientists who have gone into research and then worked their way up into management. I spoke to someone the other day who had been living in the Ukraine and then spent 10 years moving across Russia.”

Alice and Mala note that the telethon has recently seen an increase in donations from recent graduates eager to support current students. The aim for this fundraising year is to create 110 new undergraduate scholarships and to provide £500,000 to the Imperial College PhD Scholarship scheme. All of the money raised during the telethon goes towards these causes.

Alice is in fact a recipient of a Rector’s Scholarship herself, and she says that the funding was the reason she chose Imperial. “It’s really helped,” she notes. “Imperial runs a really good bursary scheme, which paid for most of my first term accommodation, but it’s still tough to meet all my costs. With the scholarship I’ve actually got some living money.”

Mala has also seen how much a Rector’s Scholarship can transform a student’s experience at Imperial. She says, “A lot of my friends are recipients, and you can tell it’s made a proper difference. The money really motivates one friend - whenever we’ve been messing about she’s the one who’s like ‘guys, let’s knuckle down.’”

Give to the Rector’s Scholarship Fund. Find out more about the Rector's Scholarship Fund