Butterflies and dragonflies with lighter colours are out-competing darker-coloured insects in the face of climate change.

We now know that lighter-coloured butterflies and dragonflies are doing better in a warmer world, and we have also demonstrated that the effects of climate change on where species live are not something of the future, but that nature and its ecosystems are changing as we speak

For example, several Mediterranean dragonfly species have expanded their northern range and immigrated to Germany, such as the Southern Migrant Hawker (Aeshna affinis), the Scarlet Darter (Crocothemis erythraea) and the Dainty Damselfly (Coenagrion scitulum). In 2010, the Dainty Damselfly was also sighted in England for the first time in over 50 years. Butterfly species that thrive in warm climates, like the Southern Small White (Pieris mannii), have dispersed to Germany during the last ten years and are still continuing their northward shift.

As with lizards and snakes, the colour of an insect’s body plays a key role in how they absorb energy from the sun, and is crucial in fuelling their flight as well as regulating their body temperature.

Professor Carsten Rahbek, from the Department of Life Sciences at Imperial College London said: “For two of the major groups of insects, we have now demonstrated a direct link between climate and insect colour, which impact their geographical distribution.”

“We now know that lighter-coloured butterflies and dragonflies are doing better in a warmer world, and we have also demonstrated that the effects of climate change on where species live are not something of the future, but  that nature and its ecosystems are changing as we speak,” concluded Professor Rahbek, who is also Director of the Center for Macroecology, Evolution and Climate at the University of Copenhagen.

To identify whether colour lightness was correlated to temperature, the scientists combined digital image analysis, which scanned and measured colour values of butterfly and dragonfly wings and bodies, with distributional data which mapped where in Europe the species are found. 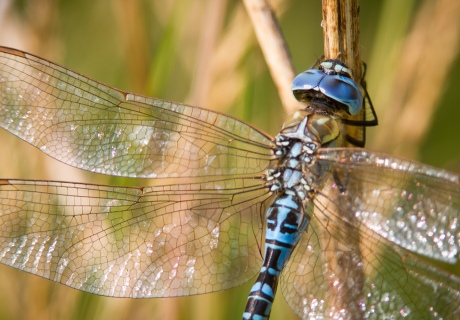 To test whether a warming climate had caused any shifts, they looked at changes in species distributions over an 18-year period from 1988-2006. Results showed that on average insects were becoming lighter in colour, and that darker-coloured insects were shifting towards the cooler areas in Western margins of Europe, the Alps and the Balkans.

Research has previously suggested that climate change is having an impact on the distribution of species, but this study provides evidence of a direct link and confirms basic assumptions about how changes in the climate can affect patterns of biodiversity.

Lead author Dirk Zeuss from Philipps-University Marburg in Germany said:  “When studying biodiversity, we lack general rules about why certain species occur where they do. With this research we’ve been able to show that butterfly and dragonfly species across Europe are distributed according to their ability to regulate heat through their colour variation. Until now we could only watch the massive changes in the insect fauna during the last 20 years. Now we have an idea of what could be a strong cause of the changes.”