However, this may be more successful if the donor is a close genetic match.

These are the conclusions of a new study by mathematicians at Imperial College London, in collaboration with the Institute of Biotechnology in Animal Production in Austria.

Mitochondria are the ‘powerhouses’ which fuel cells, and defects in mitochondria can leave the body with insufficient energy to function properly. Mothers pass vital mitochondrial DNA (mtDNA) to their children, and mutant mtDNA can be inherited from mother to child. Mutations in mtDNA are responsible for many inherited fatal diseases, such as Leigh Syndrome, which is a severe neurological disorder involving progressive loss of mental ability and movement. According to the latest figures, one in every 6,500 babies inherits a severely debilitating mitochondrial disease.

Scientists have proposed methods that allow prospective mothers who carry mtDNA mutations to produce children using a donor’s healthy mtDNA, through in vitro fertilisation, so that this healthy mtDNA takes the place of the mother's mutated mtDNA. This technique would create a so-called ‘three-parent’ baby, with nuclear DNA from mother and father, and mtDNA from the third-party donor. The UK fertility regulator The Human Fertilisation and Embryology Authority just announced guidance stating there is no evidence that ‘three-parent’ baby techniques would be unsafe, but recommended more research before formally approving the treatment.

In normal circumstances, the mother and the third-party donor may have different sequences of mtDNA, known as mtDNA ’haplotypes’ In the new study, published in Cell Reports, researchers used samples of mitochondrial haplotypes taken from a diverse set of mice captured in the wild, and new mathematical modelling, to gain a better understanding of how differences between haplotypes may affect the outcome of these therapies.

They established that when two genetically diverse haplotypes are present in the same cell, a potentially disease-carrying haplotype can come to dominate over another. The researchers say this raises the possibility that if a woman carrying mutations in her mtDNA was paired with a genetically different donor, she might still pass on those mutations.

However, the researchers found that where haplotypes are a close genetic match, this outcome is far less likely. From this work in mice, they suggest that doctors could use mtDNA from a donor who was a close genetic match to the mother, in order to give her the best chance of conceiving a healthy child.

Dr Iain Johnston, one of the lead researchers from the Department of Mathematics at Imperial College London, said: “Understanding how different mitochondrial DNA haplotypes compete and evolve is really crucial in fighting these devastating incurable diseases, but until now we have known little about how mixtures of different and diverse haplotypes develop. Our new understanding of this process provides valuable insights into how scientists can select a donor to ensure the best chance of healthy conception for affected mothers.” 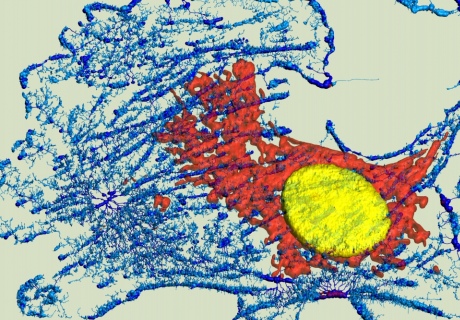 The scientists studied the mtDNA of genetically diverse wild mice, rather than inbred laboratory mice, to mathematically model how mtDNA evolves over time within cells. The genetic variation of wild mice is a better representation of mtDNA diversity in human populations than lab mice, improving the accuracy and reliability of results.

Dr Nick Jones, also from the Department of Mathematics at Imperial College London said: “Observing mitochondrial DNA competition in our tissues is both an exotic evolutionary system and also one that is relevant to our health: currently we have only a weak grasp on why and when one species might be selected over another – understanding this is our next target.”