A physicist by training, but now a mathematician by trade, Dr Graefe, from the Department of Mathematics at Imperial College London, has been recognised for her inventive work modelling ‘leaky’ quantum systems.

We are not treated equally yet. And I think there are many reasons for this, but one thing I feel is a lack of enough female scientists as role models.

According to the latest research only 13 per cent of researchers employed in Science, Technology, Engineering, and Mathematics are women. The L’Oréal-UNESCO UK & Ireland For Women In Science Fellowships were established six years ago to support and promote the work of female researchers, to encourage more women to participate in science.

Dr Graefe receives £15,000 to further her research, which she can choose to spend on support vital to developing her career including childcare, travel or scientific equipment.

She is one of four scientists awarded a fellowship from a list of 280 promising female scientists. We caught up with her to find out more about her research and discuss her experience of working as a female scientist in world so often dominated by men.

Many congratulations! How does it feel to win?

It is very exciting and to be honest quite unexpected. This award emphasises application of science and as I am a theoretical scientist, I was positively surprised to be shortlisted. It was my birthday when they called me and I was really surprised to find out I had been shortlisted from a list of nearly 300 other fantastic female scientists.  The other candidates are very high profile, really high calibre, so I’m very honoured to be sharing their company.

Why do you think this award is important?

I think lots of us grow up thinking that feminism is not needed any more and men and women are equal, and then along the line, particularly as you enter professional life, you feel that it is actually not true. We are not treated equally yet. And I think there are many reasons for this, but one thing I feel is a lack of enough female scientists as role models. I have a nine month old daughter. Progressing my career is not only important for me, it’s important that female students I interact with, as well as my daughter have a role model in science. There are few female professors and then when you look at keynote speakers at conferences, the proportion of women is even lower. I think we need to make female scientists, in all their shapes and varieties, more visible.

What is it like being a woman working in science, especially in mathematics and physics, which tend to be disciplines that are dominated by men?

In some ways it is good because you stick out. At conference people remember who you are. When I started out, I liked that idea about it. You are doing something different, a bit quirky and odd, and I liked that. But somewhere along the line you reach this point when you realise that all of your peers and colleagues are different to you. They are all men. Often when I go to conference there are no women at all, and when I am standing round with all the guys I ask “Where are all the girls?” and often people say “I didn’t realise before you mentioned it”. It is an artificial situation that you don’t necessarily encounter in other parts in life.

I also think there is a problem with the perception of motherhood. People seem to think that a woman at some point in her life is going to want to become a mother, and when this happens it is going to interfere with her professional career. And this is very strange to me. First of all, you don’t have to become a mother and if you do become a mother, why should it have to interfere with your research? Whereas a lot of my male colleagues have children, and nobody feels it interferes with their career. There should not be this false choice between having a family or pushing ahead with your career.

Can you tell us a little bit about your research?

My research focuses on what I call quantum ‘leaky’ systems. Quantum mechanics is a 100 year old theory that seeks to understand the microscopic world of atoms, electrons, and all these tiny particles, which behave according to strange and very different laws of nature than what we experience on a daily basis. It’s a very weird theory, but there is a very elegant mathematical framework to help explain it. For example if you shrink down an apple, thinking of Newton’s apple, down to the size of an atom it wouldn’t behave the way you expect it to behave at all. If the shrunken atom-sized apple hits a wall, for example, there is a probability that instead of bouncing back it will go through the wall. A lot of modern technology is based on this and similar effects. For example transistors function on these principles, and in every mobile phone there are millions of transistors. 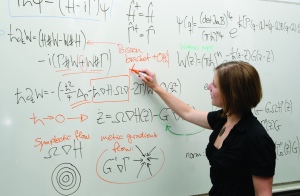 Where my research differs from the conventional theory is that it looks at a quantum system, and asks what would happen if you were to punch holes into it – a ‘leaky’ quantum system. How do you describe the content that is lost and the dynamics of how the tiny particles would move around? In recent years scientists have realised that if you engineer little holes in quantum systems you can change the dynamics and design lots of new technologies. But the theoretical models to mimic and explore these leaky systems are not sufficiently developed yet, and that is what I am working on.

What one piece of advice would you give to a young female student thinking about studying science?

Don’t think of science only as logical, clear and clinical. It is actually a very creative career which celebrates creativity and individuality. Make your career choice personal. Identify your ambitions and figure out what you can contribute. I think science is like a big band - everyone is making a small noise but together we can make a big sound. It is a fantastic field to work in, and it is one of the most collaborative things you can do.

Dr Graefe is part of Imperial's prestigious Junior Research Fellowships scheme, which gives rising stars the freedom to focus on their research and career trajectory, with no obligatory teaching or administration. More information on this scheme is at www.imperial.ac.uk/juniorresearchfellowships

Imperial operates a number of schemes to support, develop and promote female staff.

The College was a founding member of the Athena SWAN charter and is one of only four universities to receive an institutional Silver award -  recognising the College’s successful development of employment practices that further and support the careers of women. A further 11 departments have received Athena SWAN awards ranging from Bronze to Gold.