Last month, scientists from the UK’s Met Office warned a London Assembly committee that dangerous heat waves could become the norm in coming decades and urged the capital to make adequate infrastructure preparations.

Unfortunately that’s just one of a number of challenges faced by expanding global megacities like London – including loss of biodiversity; air, water and noise pollution; droughts; floods and so-called ‘urban creep’ (a green area double the size of Hyde Park is paved over every year in London).

In a global era where more people are now living in urban than rural areas, part of the solution is actually to bridge that divide and bring tailored vegetation solutions to the heart of cities. That’s the focus of a Europe-wide, Imperial-led project launched in 2012 called the Blue Green Dream (BGD) – itself part of the wider EU Climate-KIC (Knowledge and Innovation Community) initiative.

It turns out that when properly integrated with surrounding buildings and existing water works (‘blue’ infrastructure), vegetation solutions such as green roofs, living walls and rain gardens (‘green’ infrastructure) can help mitigate many of the problems listed above and make our cities cooler, healthier and more habitable (see panel, right). 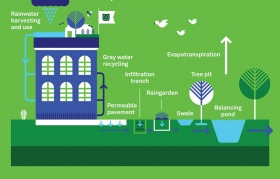 “It’s all about a smart approach to what we already have,” says Dr Karl Smith (Civil and Environmental Engineering), BGD Project Manager. “We’re asking what services does vegetation provide naturally – in essence for free – and how can we harness those services not only for humankind’s advantage but to the advantage of the environment.” 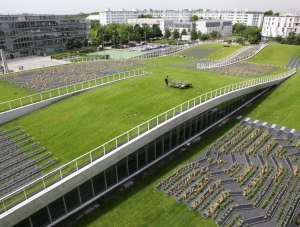 The Blue Green Wave in Paris

To date there are 15 sites either in operation or development in Europe that are showcasing BGD solutions. Flagship projects include The Blue Green Wave at ENPC in Paris – a huge undulating green roof that filters and reuses water and Tempelhof Airport (Berlin), where water siphoned from the runway is stored and filtered in green infrastructure.

Imperial is now launching its own projects at various sites across the College and the rest of London — starting with an experimental greenroof on Eastside hall of residence, South Kensington Campus, which was finished in April this year. Funded by Climate-KIC, the College’s Estates Division and the Department of Civil and Environmental Engineering it involved getting six tonnes of soil substrate, vegetation and equipment lifted up to the Eastside rooftop with a mobile crane (the lifts and stairs weren’t an option for safety reasons). 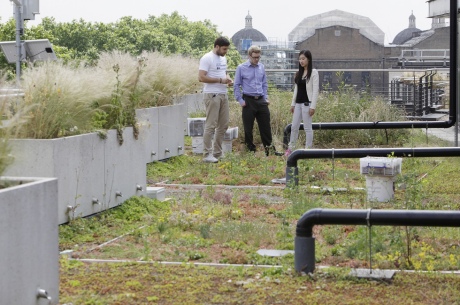 Primarily the experiment is designed to test the effectiveness of greenroofs in terms of reducing temperature and managing rainwater runoff – a particular issue in London, as project manager Karl explains.

“When you have heavy rainfall on big concrete surfaces such as roofs or pavements, what happens is the water runs off into the drains, filling up our old Victorian sewers – which weren’t designed to handle the flash floods we’re increasingly seeing with climate change. Mixing with raw sewage, the runoff then spills over into the Thames and even out into the street in some cases. That’s why the authorities are planning to build a £4.6 billion Thames Tideway Tunnel – the ‘super sewer’. But we think we can tackle this issue far more cheaply with greenroofs and rain gardens that act to retain stormwater.” 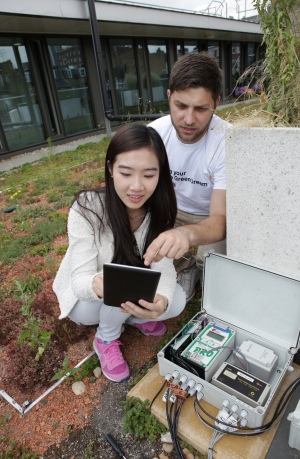 The Eastside green roof has sensors embedded, which feed data to the cloud where it can be accessed wirelessly

The role of monitoring and logging the effectiveness of the Eastside green roof falls to PhD students Xi Liu and Srdjan Stankovic (both Civil and Environmental Engineering). They’ve embedded a series of sensors among the plots that automatically feed back data on weather conditions, temperature run-off volumes and soil moisture levels. Samples of the green roof run-off water are also being tested in the lab for levels of potential pollutants including nitrates, organics and metals.

A vision for the future

The BGD was first dreamt up by Professor Cedo Maksimovic (Civil and Environmental Engineering) who now spends much of his time meeting with city majors, town planners, architects and other professionals around the world to persuade them to adopt aspects of BGD philosophy into their projects.

“I was walking to work through Hyde Park one morning – as I’ve done for 20 years now – and I saw the vegetation there dying. As a water engineer, I just thought there must be a better way to integrate green areas with urban water infrastructure. By coincidence that day there was a call for proposals from Climate-KIC and I felt it was an opportunity not to be missed.

“From there it has progressed beyond my most optimistic expectations and dreams – the reason being because the idea is simple but nobody has put it together in a consistent way using both common sense and basic science.”

Cedo is now setting up ‘BGD nodes’ in cities around Europe (initially London, Berlin, Paris, Rotterdam) to continue the vision once the project concludes next year. The nodes will provide a focal point for engineers, planners, architects and decision makers and act as a catalyst for creating spin-out companies specialising in aspects of BGD technology. But Cedo’s vision extends further afield – to Asia, Africa, Latin America and the Middle East.

He has recently worked with Grant Associates – the team responsible for the iconic ‘Gardens By the Bay’ in Singapore – to create a large new residential development in the City State that will incorporate BGD Solutions as central to their design.

Implemented extensively over entire city areas such as Singapore, Cedo thinks that Blue Green solutions can lower temperature by a crucial few degrees and reduce a city’s running costs by around 30% – cutting water, food, heating and cooling bills. “We have a slogan which is a fun play on Hamlet – ‘To BGD or not to BGD, that is no longer the question’. “This must happen to ensure our cities will be habitable in the future!”