Scientists have designed a record-breaking laser that accelerates the interaction between light and matter by ten times.

Reporting in the journal Nature Physics, physicists from Imperial College London and the Friedrich-Schiller-Universität Jena, in Germany, used semiconductor nanowires made of zinc oxide and placed them on a silver surface to create ultra-fast lasers.

By using silver rather than a conventional glass surface, the scientists were able to shrink their nanowire lasers down to just 120 nanometres in diameter - around a thousandth the diameter of human hair.

When we first started working on this, I would have been happy to speed up switching speeds to a picosecond, which is one trillionth of a second. But we’ve managed to go even faster

The physicists were able to shrink the laser by using surface plasmons, which are wave-like motions of excited electrons found at the surface of metals. When light binds to these oscillations it can be focused much more tightly than usual.

By using surface plasmons they were able to squeeze the light into a much smaller space inside the laser, which allowed the light to interact much more strongly with the zinc oxide.

This stronger interaction accelerated the rate at which the laser could be turned on and off to ten times that of a nanowire laser using a glass surface. These are the fastest lasers recorded to date, in terms of the speed at which they can turn on and off.

The scientists have designed the laser so that it is not only ultra-fast, but also stable and effective at room temperature. One of the uses of this technology could be to improve communication technology by generating faster data connection speeds and speeding up the transfer of information. 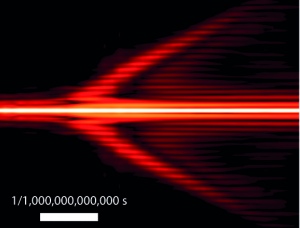 Senior author Dr Rupert Oulton from the Department of Physics at Imperial College London said: “This work is so exciting because we are engineering the interaction of light and matter to drive light generation in materials much faster than it occurs naturally. When we first started working on this, I would have been happy to speed up switching speeds to a picosecond, which is one trillionth of a second. But we’ve managed to go even faster, to the point where the properties of the material itself set a speed limit.”

PhD student Robert Röder, from Friedrich-Schiller Universität Jena said: “This is not only ‘world record’ regarding the switching speed. Most likely we also achieved the maximum possible speed at which such a semiconductor laser can be operated.” 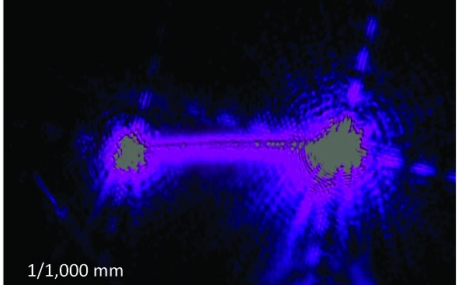 Laser emitting ultraviolet light from the end of the nanowire

Lasers that can switch on and off at ultrafast speeds are important for data communication as lead author Themis Sidiropoulos, who is currently completing his PhD in the Department of Physics at Imperial College London, explains: “Turning a laser on and off quicker means more information carrying 1s and 0s per second, allowing much faster data communications. In fact, these lasers are so much faster than conventional electronics that we had to develop an optical switching method to measure their speed.”

Using metals that support surface plasmons within a laser usually ‘upsets’ its functioning because the metal’s electrons scatter easily and the laser loses energy. This new class of laser, sometimes described as SPASERs (Surface Plasmon - as opposed to Light - Amplification by Stimulated Emission of Radiation), is not as efficient but has great potential in other ways, and this new design confirms for the first time the capability to achieve ultrafast switching.

Dr Oulton adds: “Another exciting potential of these devices is to use the light inside the laser itself, which is squeezed into such a small focus that it is super-intense. This would allow new approaches to super-resolution imaging and biomedical detectors with single molecule sensitivities.”

The research was funded by the Engineering and Physical Sciences Research Council (EPSRC) and the Deutsche Forschungsgemeinschaft.