Scientists have taken pictures of the BRCA2 protein for the first time, showing how it works to repair damaged DNA.

Mutations in the gene that encodes BRCA2 are well known for raising the risk of breast cancer and other cancers. Although the protein was known to be involved in DNA repair, its shape and mechanism have been unclear, making it impossible to target with therapies.

Researchers at Imperial College London and the Cancer Research UK London Research Institute purified the protein and used electron microscopy to reveal its structure and how it interacts with other proteins and DNA. The results are published today in Nature Structural and Molecular Biology.

Around one in 1000 people in the UK have a mutation in the BRCA2 gene. The lifetime risk of breast cancer for women with BRCA2 mutations is 40 to 85 per cent, depending on the mutation, compared with around 12 per cent for the general population. Many women who test positive for BRCA1 and BRCA2 mutations choose to undergo surgery to reduce their risk of breast cancer. Mutations can also raise the risk of other cancers, such as ovarian, prostate and pancreatic cancer.

The BRCA1 and BRCA2 genes encode proteins involved in DNA repair. The DNA in our cells undergoes damage thousands of times a day, caused by toxic chemicals, metabolic by-products and ultraviolet radiation. Repair mechanisms correct most of this damage, but unrepaired damage can lead to cancer. 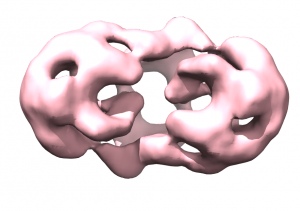 The study was led by Professor Xiaodong Zhang from the Department of Medicine at Imperial College London and Dr Stephen West at the London Research Institute.

“This study improves our understanding of a fundamental cause of cancer,” said Professor Zhang, a Wellcome Trust Senior Investigator. “It’s our first view of how the protein looks and how it works, and it gives us a platform to design new experiments to probe its mechanism in greater detail.

“Once we have added more detail to the picture, we can design ways to correct defects in BRCA2 and help cells repair DNA more effectively to prevent cancer. We can also think about how to make the repair process less effective in cancer cells, so that they die.”

The study found that BRCA2 proteins work in pairs – which the researchers found surprising since BRCA2 is one of the largest proteins in the cell.

BRCA2 works in partnership with another protein called RAD51. BRCA2 helps RAD51 molecules to assemble on strands of broken DNA and form filaments. The RAD51 filaments then search for matching strands of DNA in order to repair the break.

The findings showed that each pair of BRCA2 proteins binds two sets of RAD51 that run in opposite directions. This allows it to work on strands of broken DNA that point in either direction. They also show that BRCA2's job is to help RAD51 form short filaments at multiple sites along the DNA, presumably to increase the efficiency of establishing longer filaments required to search for matching strands.

The research was funded by the Medical Research Council and the Wellcome Trust.