On 16 October, Dr Neil Dufton will showcase his science-inspired art in his debut exhibition, Auto-Biology, at Imperial College London.

Featuring a collection of 10 unique prints, the exhibition is an illustrative autobiography of Dr Dufton’s research over the last five years.

Inspired by the works of Salvador Dali and psychedelic music posters from the 1960s, Dr Dufton’s work blends lively, surreal images with concepts from his scientific research. The artwork draws on various controversial topics, such as animal research and stem cell therapy, as well as portraying scientific techniques, equipment and processes. Through his art, Dr Dufton hopes to open up the scientific debate to the wider public.

“Science doesn't always have to be these inaccessible people discussing things that the public won't understand. I think we need to get back to the ideas, the philosophy and the creativity to get people involved and say, you know, science isn't just about measuring things precisely; it's about solving the puzzle,” says Dr Dufton, a Research Associate at the National Heart and Lung Institute. 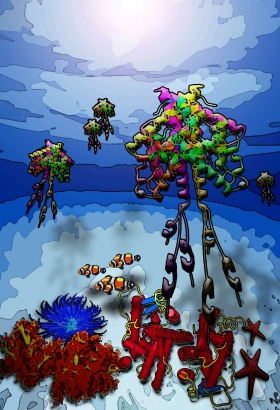 Jellied Oestrogen is one of the pieces which will be on display at Auto-Biology. Working with his perception that the molecular structure of oestrogen resembles the shape of a jellyfish, Dr Dufton portrays the hormone in an abstract marine setting.

“I like putting things in an environment that people will understand, because actually the body’s circulatory system is a bit like rivers and oceans. And just like jellyfish, molecules in our bodies have to travel huge distances, relatively, for example from our brain to our toes, to have their desired effect,” he says.

The newest piece in the collection, Stem Cell Therapy, is strongly inspired by vivid psychedelic artwork and the “pill-popping culture” that evolved in Britain throughout the 1960s. In this piece, Dr Dufton explores the idea that since the 60s it has been culturally ingrained in society to expect a quick-fix pill for everything. He questions whether stem cell therapy, which changes cells biologically rather than relying on drugs, will benefit from the same cultural movement. 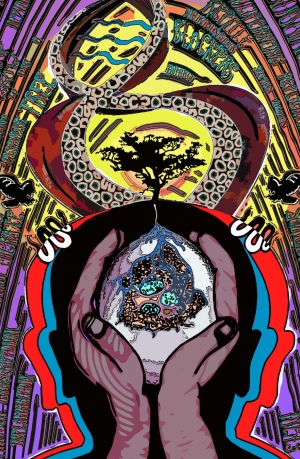 Dr Dufton hopes that through portraying scientific concepts visually, he can reach out to people who might not have otherwise been interested in his research.

"In my mind I have a bit of a confrontation with how the formalities of science make it difficult for people and scientists to communicate with each other. It's almost like I'm in limbo between two very opposing worlds, but we're still trying to communicate to the same ends," he says.

Two of the prints that will be on display, Flow Cytometry and Peace Through Anarchy are now in the Wellcome Trust Images collection.

Auto-Biology is free to attend and open to all. It will run from October 2014 to March 2015 in the Centre for Co-Curricular Studies, 3rd floor of the Sherfield Building in Imperial College London. The opening night, on Thursday 16 October, will take place from 19.30 to 22.00 and is open to members of the public. The artwork is for sale. 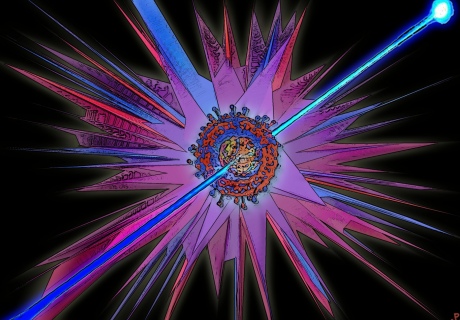 For more information, to view more artwork or to contact the artist, please visit www.notproperlydone.com or follow @neildufton.

Dr Dufton is one of two Imperial researchers taking part of a Wellcome Trust funded arts project called Silent Signal developed and produced by Animate Projects. Silent Signal brings together six artists and six scientists to create experimental animations for galleries and online exhibitions. Dr Dufton is collaborating with the digital animation group Genetic Moo to explore inflammation and immunology in an interactive installation called 'The Battle of Blister' that will immerse the audience in the body's immune system. Meanwhile, Dr Serge Mostowy from the Department of Medicine is collaborating with documentary maker Samantha Moore, to focus on how the cytoskeleton responds to intracellular pathogens by assembling into septin cages.